Joel and Ethan Coen’s “Miller’s Crossing” begins with a lecture.

We hear Johnny Caspar (Jon Polito), who is addressing a yet-to-be-identified figure, and us, providing a discourse on the subject of ethics.

The meeting isn’t going well, if the sour look on Finney’s face is any indication; however, it may very well be that Caspar’s reasoning is faulty. Friendship, character and ethics are not compatible, certainly not in the realm of the Irish mafia.

The opening scene is a symphony of wordplay, tough talk, mob lingo and concealed bonhomie among men. We’re deep into this world long before the celebrated opening credits, with its gorgeous Carter Burwell score and dreamy imagery of a black hat tumbling around the woods.

These are Tom’s dreams, which he only reveals to his on-again, off-again girlfriend Vera (Marcia Gay Harden). Tom’s unconscious visions are blissfully tranquil and devoid of people. His waking life is, in comparison, consistently tense and booze soaked.

“Miller’s Crossing” exists in a world James Cagney or George Raft could suddenly walk through the door and not seem out of place. Sam Mendes’ “Road to Perdition” dreamed of being this movie. The tone is a blend of pin-drop mafia drama with a dash of screwball comedy. It’s not a slapstick spoof, like “Johnny Dangerously” or a solemn work akin to “The Godfather.” What the Coen brothers created here is as hard to describe as it is for anyone subsequently to duplicate. 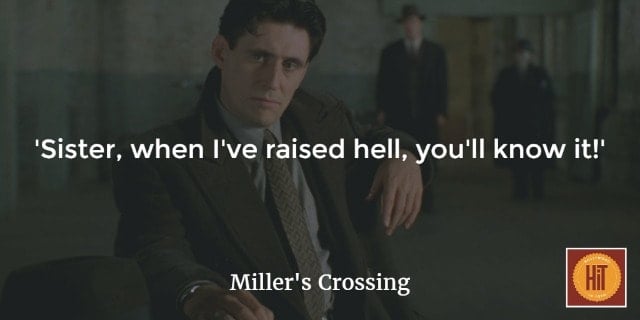 Byrne’s Tom is an interesting choice for the lead. The character is cold and cruel, a sarcastic, always-calculating blunt force object with a crippling gambling addiction. Polito is phenomenal, always finding moments where we love Caspar as much as we despise him.

John Turturro is outstanding in the same way, playing a man we want to see flee from this world, as he’s clearly in over his head among armed men wearing hats. The arrogance of Turturro’s Bernie, his belief that he can hold his own in this space, is his downfall.

Bernie’s scene with Byrne in the woods is still the film’s most iconic moment, due to how beautifully Turturro plays it.

Steve Buscemi is on hand for a scene in which he demonstrates single-handedly why he’s a perfect character for any Coen universe; his cameo is a bit of verbal gymnastics that must have taken weeks of rehearsal to perfect.

“Miller’s Crossing” exists in a world James Cagney or George Raft could suddenly walk through the door and not seem out of place.

J.E. Freeman’s The Dane is a frightening figure, a no-nonsense thug lacking a sense of compassion or sympathy for anyone. It’s amusing to recall Freeman’s breakout role as a Norman Bates parody in “Ruthless People” and to contrast it with what he does here; while two films couldn’t be more different, the intensity in Freeman’s work is the same.

“Miller’s Crossing” is notable for showcasing one of Finney’s last great performances (we lost him in 2019, at the age of 82). When we see Leo trade “body blows” with rival mobsters during a failed hit or at Tom in a moment of Shakespearean grandeur, we see why he’s the deadliest of them all and truly the boss.

In her film debut, Harden is sensational – she has the sound, look and moxie of a Golden Age of Hollywood star, like Greta Garbo or Jean Harlow. Her performance is fierce and emotionally charged, more than up to stealing the movie from a cast of formidable male actors.

Barry Sonnenfeld’s cinematography does amazing things here. Sometimes, its subtle, like a sudden shift to the left to follow a man about to hit the ground after being pummeled. At other times, it’s so subtle, one can miss how strenuous these shots must have been to pull off.

“Miller’s Crossing” came out in a season overloaded with prestigious mob dramas. It was released within days of Phil Joanou’s “State of Grace” and Martin Scorsese’s “Goodfellas” and a couple of months ahead of Francis Ford Coppola’s “The Godfather, Part III.”

While moviegoers ignored Joanou’s great film, continue to debate if “Goodfellas” is the greatest mob movie of all time (and how “Dances with wolves” stole its precious Oscar) and whine about the eternally misunderstood third chapter of the Corleone saga, “Miller’s Crossing,” a work of perfection, stands alone.

This is as deeply eccentric a film one could expect coming from the Coen brothers right after their gonzo classic, “Raising Arizona.” Their take on a mob movie is infused with comedy as aggressive as the tommy gun hits, double crosses even more confusing than the triple crosses and a soulfulness unlike any other film of its year.

The dialog is flush with thick, juicy verbal marrow to gnaw on. A pest is shooed away with, “Drift, small guy!” The angry retort: “Drop dead, ape!” This is the kind of story that relies heavily on character name-recognition (we have to remember figures like Tic-Tac, Mink and Drop, as well as Tom and Leo) in order for everything to fall together.

The screenplay has been designed to evoke the narrative knottiness of Dashiell Hammett, Raymond Chandler and even Robert Towne (incest is mentioned here, though not to the extent that it defines Towne’s “Chinatown”).

The story is impossible to fully grasp, let alone follow, the first time around. If the marketing for this movie did anything right, it was producing a trailer that helpfully introduced each offbeat character by name and character trait (“The Dane…has he got it figured?”).

While ignored by mainstream audiences and not universally loved by critics when it rolled out over the fall of 1990 (it premiered at the New York Film Festival), “Miller’s Crossing” is a pivotal turning point for two of our greatest American filmmakers.

It proved the razor sharp and highly accomplished “Blood Simple” and the inspired mania of “Raising Arizona” was no fluke or a creative summit.

Truly, the Coen brothers were just getting warmed up.

With every film they create, the Coen brothers are shaping their own world. None of the settings of any of their films, not even the “normal” ones, take place in a locale that can be called literal, naturalistic or clearly reflecting the known realm.

Their work, which is mostly steeped in Americana, reflects a mindset that is as quintessentially cracked but as profoundly rich and universal as the work of that other great American surrealist, David Lynch.

With every passing film, their movies provide a transporting experience, with characters that are too large to be real but so recognizable and detailed, we swear we’ve met at least one person like “that guy in the Coen brother’s movie.” The auteur ability to shape fantastic, larger-than-reality characters and the world they exist in, delivered with dialog that is distinctly the work of the film’s creator, is something Joel and Ethan Coen did for years before Quentin Tarantino arrived on the film scene.

Following this film, the Coen brothers gave us “Barton Fink,” “The Hudsucker Proxy,” “Fargo,” “The Big Lebowski,” “O, Brother, Where Art Thou,” “The Man Who Wasn’t There,” and, finally, a movie that didn’t work and showed us they were capable of missteps, “Intolerable Cruelty.”

Bringing up that George Clooney dud is every bit as uncool as reminding David Lynch fans that he made “Dune,” so let’s get back to “Miller’s Crossing.”

There is a subtext here about prejudice finding a way into the code of honor among gangsters: while it’s subtle, the slurs tossed at Bernie and others for being Jewish and presumably gay are there. While Caspar insists these crime organizations operate with proper “ethics,” no one here is following anything other than their own self-interest.

Tom seems to thrive on opportunities to push his luck (like an early scene where he just-barely manages to avoid getting caught in bed with somebody else’s girlfriend). Sometimes chance, on some profoundly cosmic scale, seems to be protecting him, and sometimes it’s just dumb, unreliable luck.

The Coen’s film is ultimately about the randomness of life, how events that cannot be explained are, like the dentures that gum up the clockwork in “The Hudsucker Proxy,” difficult to explain and impossible to duplicate. So many events in the film, and in real life, are impossible to fully understand without having seen all the unexpected facets that brought the key players together.

Take one of the film’s first scenes – a corpse sits against a wall, while a curious dog and a little boy investigate. The boy removes the body’s toupee and runs off with it, a playful, utterly spontaneous act.

Later, Tom and Leo discuss the discovery of the corpse and its lack of hair. “Who would do such a thing”? We know but no one in the film, aside from the boy who snatched the hairpiece (who we never see again), will ever know.

Random occurrences of chance are always either confounding these characters or saving them.

The film reverses this perspective later on, as a random corpse found in the stretch of woods, referred to as “Miller’s Crossing,” is what saves Tom from The Dane burying a bullet in his brain; we know the corpse isn’t the one The Dane isn’t looking for but the body they find is unrecognizable and seems like it’s the one they sought after,

Tom’s life is spared by a seemingly random, unconnected discovery that the film never follows up on.

Is “Miller’s Crossing” about a man dreaming of his hat or is it a hat dreaming of being a man? It’s impossible to say the first time. Thirty years later, after this film has become a part of my film education and among my favorite movies, I’m still grasping at its ideas, relishing the chance to revisit these characters, replaying my favorite lines and striving to figure out what it means, before I reach out and the meaning flies away from me again.