Thirty years ago Nicolas Cage stole one of five quintuplets and never looked back. 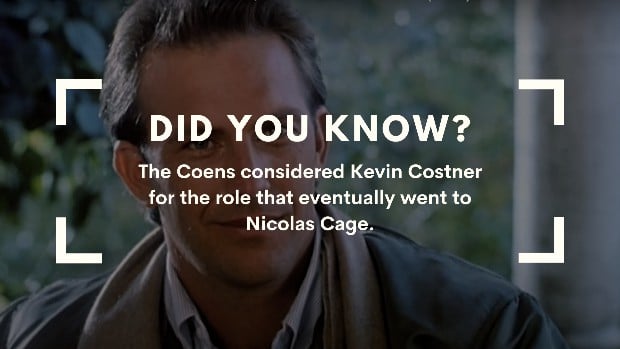 “Three Men And A Baby

“Raising Arizona” endures all the same.

The Coens went on to direct other comedies. Many swear “The Big Lebowski” is their finest comedic hour. The Dude may abide, but he can’t compare to H.I. McDunnough and co. … or Dot extolling the joys of parenthood.

Consider the following 19 quotes from the Coens’ “Raising Arizona.” Any movie would be lucky to have a handful of lines this good. “Raising Arizona” has even more gems, but we had to stop at some point.

Driver: Son, you got a panty on your head.

Evelle: [holding a bag of balloons] These blow up into funny shapes and all?

Clerk: Well no, unless round is funny.

H.I.: Edwina’s insides were a rocky place where my seed could find no purchase.

Ed: [crying] Turn to the right.

H.I.: That sumbitch. You tell him, I think he’s a damn fool, Ed. You tell him I said so – H.I. McDonnough. If he wants to discuss it, he knows where to find me: in the Maricopa County Maximum Security Correctional Facility For Men State Farm, Road Number 31, Tempe, Arizona! I’ll be waitin’! I’ll be waiting.

Evelle: H.I., you’re young and you got your health, what you want with a job?

Glen: Say that reminds me, how’d you get that kid so darn fast? Me and Dot went in to adopt on account a’ somethin’ went wrong with my semen, and they said we had to wait five years for a healthy white baby. I said, “Healthy white baby? Five years? What else you got?” Said they got two Koreans and a negra born with his heart on the outside. It’s a crazy world.

Gale: I know you’re partial to convenient stores, but dammit, H.I., the sun doesn’t rise and set on the corner grocery.

Payroll Employee: Gov-mint do take a bite, don’t she?

H.I.: This here’s the TV. Two hours a day, maximum, either… either educational or football, so’s, y’know, you don’t ruin your appreciation of the finer things.

Dot: Rollie! You take that diaper off your head and you put it back on your sister!

Evelle: Ma’am, you don’t breast-feed him, he’ll hate you for it later. That’s why we wound up in prison.

Dot: You soak his thumb in iodine and you might get by without the orthodonture, but it won’t knock a thing off the university.

Ed: You mean you busted out of jail.

Evelle: No, ma’am. We released ourselves on our own recognizance.

Gale: What Evelle here is trying to say is that we felt that the institution no longer had anything to offer us.

Gale: You understand, H.I.? If this works out, it’s just the beginning of a spree to cover the entire southwest proper. And we keep going until we can retire. Or we get caught.

Gale: All right, ya hayseeds, it’s a stick-up. Everybody freeze. Everybody down on the ground.

Bank Customer: Well, which is it, young feller? You want I should freeze or get down on the ground? Mean to say, if’n I freeze, I can’t rightly drop. And if’n I drop, I’m a-gonna be in motion. You see…

H.I.: We figured there was too much happiness here for just the two of us, so we figured the next logical step was to have us a critter.

Tough to pick a favorite … but is there one quote that stands above the rest? Maybe a funny divorce quote we left out?

Leave your answer in the comments below. And while you’re at it, here’s a gaggle of great comedy clips to lighten your day.