We didn’t need a memoir to tell us filmmaker Barry Sonnenfeld looks at life differently than most auteurs.

Just peek at his IMDB.com page. Movies like “Raising Arizona,” “Men in Black,” “Blood Simple” and “The Addams Family” highlight his unparalleled eye for whimsy, underdogs and killer camera angles.

“Barry Sonnenfeld, Call Your Mother” packs even more surprises than expected. It’s brutally honest about his dysfunctional upbringing and serial sexual abuse. His fans, once they stop wincing at his noxious family scrapbook, will relish meeting the quirky souls who collaborated with Sonnenfeld along the way. 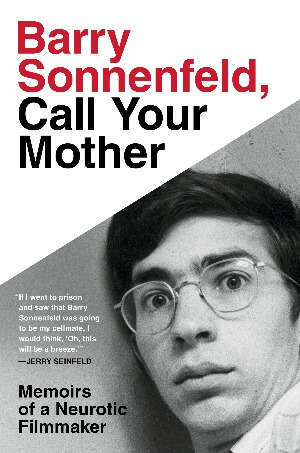 There’s screaming behind the scenes, for starters. Lots and lots of screaming.

Artistic differences bubble up from the most unexpected places. And, through it all, the author’s unsteady stomach kept pace with the stressors a Hollywood player endures.

A reader’s only regret?

Why isn’t Sonnenfeld writing more often, or even better, hosting his own podcast?

The memoir’s first half is pure biography, looking at Sonnenfeld’s turbulent upbringing. His mother suffered from depression, addiction and more, something which lorded over young Barry’s life.

The way he describes the cockroaches that congregated in the Sonnenfeld family’s sink leave images not easily forgotten.

His father carried on in dutiful fashion, but he proved disastrous in different ways. Together, they failed their son when it counted the most.

The young Sonnenfeld endured, what other choice did he have? And, years later, segued from an early interest in photography to a celebrated career as both cinematographer and director.

The memoir lacks a blow-by-blow account of the “Raising Arizona” shoot, a literary crime of the first order.

The author compensates with rich details behind other famous films, including “Wild, Wild West,” “Men in Black,” and the film that kicked off Sonnenfeld’s film career, “Blood Simple.”

His clashes with “Big” director and erstwhile Laverne Penny Marshall are hilarious and revealing. Even better? His short stint as the cinematographer for “Tango & Cash.”

Getting canned in Tinsel Town can be a glorious thing, we’re told.

Sonnenfeld isn’t looking to make friends or burn bridges with “Call Your Mother.” He’s getting things off his chest, and we’re all the wiser for it.

You’ll understand Hollywood, Inc. much, much better after the final pages.

Sonnenfeld’s love/loathe bond with producer Scott Rudin powers the book’s final third, and it’s a doozy. You could spend years studying the behind-the-scenes struggles in La La Land. Or, just crack “Call Your Mother” and get an expert’s take on the farcical industry circa the late 20th century.

The pre-release jitters for “The Addams Family” alone are worth the book’s cover price.

Other morsels will be devoured by film fanatics, from Sylvester Stallone knowing the best lighting for his features to failed meetings with ulterior motives. Consider how “Ba” dined with Dustin Hoffman about performing in “Get Shorty,” only the author figured the superstar had other intentions.

“I knew he was on an ego fishing expedition and would never be in the film,” he writes. The actor primarily wanted to know if one of the film’s characters was based on him.

That anecdote pales compared to his disastrous meeting with Warren Beatty to play the John Travolta role in “Get Shorty.” Sonnenfeld confirms the superstar’s celebrated ego in spit-take funny fashion.

Sonnenfeld doesn’t dish any dirt on “Nine Lives,” his most recent big screen effort, and that’s a shame. Maybe the wounds from that dud are too raw, too fresh to pick at now. Also missing? Chapters on such criminally underrated Sonnenfeld films as “Three O’Clock High” and “Miller’s Crossing” (he served as Director of Photography on both).

He even caps his memoir in compelling fashion, giving us one last family revelation we didn’t see coming. It’s not a Hollywood ending, per se, but it’s powerful in its own haunting way.

The snapshots provided here are both memorable and hilarious. Why Sonnenfeld never segued into a screenwriting career remains an unsolved mystery.

Just be glad he finally treated us to a memoir worthy of his flawed, but routinely brilliant, resume.