To summon the film’s creature, you simply knock twice on her door. That goes against the settled science from both “Candyman” and “Beetlejuice.”

That’s about as daring as “Don’t Knock Twice” gets.

Which leaves poor Katee Sackhoff delivering a performance far better than most horror entries deserve. She nearly lifts the flailing film on her back and carries it to its improbable finish.

“Longmire’s” Sackhoff stars as Jess, a mother desperate to reconnect with her estranged daughter. Chloe (Lucy Boynton, “Sing Street“) holds a sizable grudge since Jess abandoned her under mysterious circumstances. When Chloe’s pal convinces her to test an urban legend about an abandoned house it frees a dangerous spirit that attaches itself to Chloe. 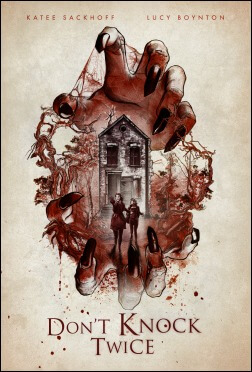 Can Jess protect Chloe from this looming threat? Is Sackhoff silently auditioning for a better horror film? Will “Don’t Think Twice” serve up so many fake scares you’ll throw popcorn at the screen.

“Don’t Knock Twice” is like two mediocre horror movies in one. We’ve got a ghoulish figure summoned by a plot device so shopworn it should be quarantined for a good half century. And then there’s Sackhoff and Boynton, eager to invest real mother-daughter gravitas into a perfunctory shock feature.

Sackhoff even brings her characters’ sculpting prowess to life. It’s a nice touch in a genre that too often hurries past those details.

The elements at the actresses’ disposal aren’t to blame. The lo-fi effects are shrewdly doled out, and the soundtrack delivers the requisite suspense. We’ve seen most of it before, though, from the exhausted dream sequence meant to shock us to the trick finale begging for a sequel.

And then there’s the screenplay, which takes an exasperating, paint-by-numbers approach. One character’s amateur sleuthing uncovers the entire mystery. Another character serves as something hoarier than pure exposition. She explains everything in pinpoint detail.

Heck, at one point a significant motivation is literally written on the floor for all to see.

The film’s first half doesn’t skimp on the shocks, even if  roughly half of them are jump scares. It soon gives way to a one-note procedural. By then, we’ve lost most of our interest in the resolution. The sleuthing on display would hardly make Columbo sweat.

FAST FACT: The first movie Katee Sackhoff saw as a child was “Predator.”

“Don’t Knock Twice” gives plenty of attention to its maternal themes. Like the recent horror film “The Monster” it strains to deliver more than your average body count fare. It partially succeeds, thanks to the actresses’ work and the amount of screen time devoted to their rickety bond.

Without a strong scare support, though, that proves self defeating. The movie doesn’t pack the B-movie chills of straight to video shlock. It’s not meaty enough, dramatically speaking, to hold our attention between scare tactics.

And enough with the flickering lights! It’s the most annoying trope of the modern horror film. “Don’t Knock Twice” leans on it so heavily the lighting the production’s gaffer should have gotten top billing.

HiT or Miss: Strong performances can’t save “Don’t Knock Twice,” a movie at odds with its own storytelling ambitions.