The mask worn by the villain in “Hush” is a perfect horror movie disguise.

It’s bleached white with an eerie, almost comical expression. It’s not based on William Shatner’s visage, but it recalls the eerie chill of Michael Myers’ mask.

Only the killer removes that mask a third of the way into the film.

That’s not how you make an indelible movie monster. Director Mike Flanagan of “Gerald’s Game” fame isn’t interested in following the usual genre beats. He’d rather tell a story detached from genre expectations.

The horror film doesn’t go out of its way to deconstruct genre tropes. It does so organically, never forgetting to unnerve us at nearly every step.

Kate Siegel stars as Maddie, an author living in an isolated house in the woods. It’s not a cabin, mind you, but it might as well be.

She also happens to be mute, having lost her hearing and ability to speak as a teen. 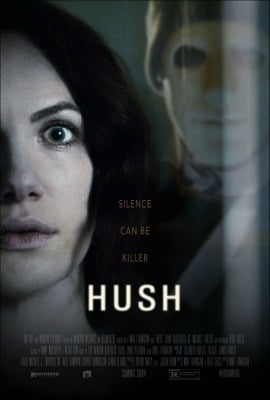 In horror movie parlance, we’re tempted to call this a gimmick. It sets Maddie apart from other “Final Girls,” no doubt. Yet Flanagan employs Maddie’s medical history in ways that patch over any thoughts of cheap trickery.

What’s more, Maddie emerges as a flesh and blood creation. Then again, the film treats everyone that way, even the killer circling Maddie’s home.

“Hush” offers a tight 82 minutes of tension, and it moves even faster than its brief running time. The screenplay hints at Maddie’s back story, piecing together both her solitude and willingness to fight to her dying breath, if needed.

Her stalker (John Gallagher, Jr.) is just as resourceful, making their cat and mouse contest all the more rewarding.

You won’t curse characters for their stupidity, and you’ll forgive them when their wounds get the best of them.

DID YOU KNOW? Director Mike Flanagan could have made his 2013 film “Oculus

” years earlier had he accepted a deal to tell the story via found footage visuals. He rejected the offers.

Maddie can’t hear the maniac storming her home. She can’t hear his footsteps, or the screams of his victims, and react accordingly. It puts her at an immense disadvantage while simultaneously ramping up our sympathy for her.

It’s how she assesses the situation and fights back that seals the deal for us. This is one Final Girl who deserves to live through the end credits.

Siegel, who co-wrote the screenplay with Flanagan, is credible and complex in a role that could easily fall into cliche. You can almost see her mind racing as the killer plays out his attack. It’s an element ultimately Flanagan exploits to thrilling effect.

Director Mike Flanagan and Kate Siegel on ‘Hush’, ‘Before I Wake’ and ‘Ouija 2’

Late in “Hush” the camera remembers to revisit the dead, mournful shots that debunk the notion that horror junkies thrive on clever “Kills” alone.

The screenplay cleverly plugs into both Maddie’s writing background and personal story to add gravitas to the third-act scramble.

There’s nothing remarkable on the surface about “Hush.” It’s another home invasion thriller with a body count. It’s how the filmmakers both revere and revolt against conventions that makes this a genuine must-see.