Lynch gained horror immortality by playing Twisty the Clown on season 4 of “American Horror Story.” Since then, he’s explored why the blood-soaked genre matters. 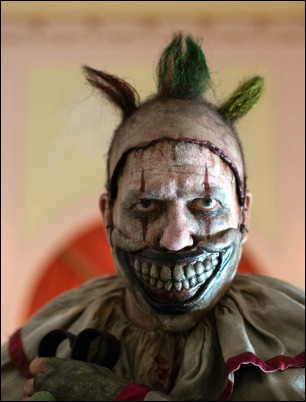 A chat with a horror convention organizer helped him see the light.

“It’s our way of getting close to death,” Lynch says. “So much of our dying is taken away from us now. [In the past] people lay in the parlor for three days. People died at home. Death was all around you.”

There’s nothing clean, or conventional, about Lynch’s latest horror project. “The invitation” gathers a group of once-close friends for an evening of fine wine, good food and conversation. If only it were that simple.

Will (Logan Marshall-Green) questions the motives of the party’s hosts, setting everyone on edge. Is Will right to be concerned? Or are his personal demons playing tricks on him … and us?

Lynch co-stars as Pruitt, a new friend with his own mysterious past. The film’s screenwriters sent the script his way, hoping he’d embrace the part.

“It’s a very tricky script. It doesn’t follow a standard structure,” he says. “You’re not sure if what you’re seeing is actually happening.”

The 18-day shoot involved serious rehearsals, which proved important given the limitations of the film’s set.

“The geography of the house didn’t fit the script exactly. We had to make adjustments to the dialogue, adjustments to the scene” he says. That might not sound like a glamorous shoot for Lynch, who bounces from indie fare to big-budget projects like “Shutter Island.” The group embraced the restrictions.

“People were there for a great ensemble experience,” he says.

The Colorado native knows a thing or two about ensemble work. Lynch is one of Hollywood’s most reliable character actors, veering from sinister clowns to sympathetic pastors (“Miracles from Heaven”). He even snared a pivotal role in this season’s “The Walking Dead” on AMC.

“I’ve been fortunate to work with people who ask me to do different things,” he explains. That mirrors the dawn of his acting career. Before landing a highly visible role in 1996’s “Fargo” he served in Minneapolis’ Guthrie Theater rep company.

He ended up playing two or three different characters at a given time.

“You get miscast a lot,” he explains. That doesn’t seem a problem anymore.

RELATED: Bruce Greenwood: Hands on, Humble and In Demand

Sometimes the six-foot-three actor can’t help but fit a certain type, though.

“When you’re a 50-year-old bald guy you’re gonna play your share of cops,” he says with a laugh. That also means he’s less likely to stand atop the A-list. You won’t hear any regrets from him.

“I love the process of storytelling, the acting,” he says. “I’m always joyful [on set]. It’s never a chore.”

The Name Above the Title

He’s about to get a feel for what it’s like to carry a story by himself. He typically dog-ears the script pages that feature his character’s lines. For an upcoming project, he had to dog-ear nearly the entire script.

He takes a pragmatic approach to life as a character actor. The classification cuts two ways, he says. Some of his peers disappear into their roles, like newly-minted Oscar winner Mark Rylance. Others embrace their type, playing similar parts over years, even decades.

He’s happy to fall into the former camp.

“I’m grateful casting directors are going to try me in different material, and the audience is willing [to follow me],” he says. “As long as that’s true, I hope to continue to stretch and surprise.”