After all, Greenwood starred in not one but two films featured at November’s Starz Denver Film Festival – the thoughtful road trip drama “WildLike” and the psychologically taut “Elephant Song.”

And, in an expansive chat with HollywoodinToto.com, Greenwood admits he occasionally checks his own IMDB.com page to see what film he has coming out next.

The Canadian actor, who visited Colorado to pick up the festival’s Excellence in Acting award, signed on for “WildLike” after being impressed with the script as well as its writer/director, Frank Hall Green.

“It deals on a more plausible way with a subject that’s difficult to talk about and doesn’t offer solutions,” Greenwood says of the film, which co-stars Ella Purnell as a young woman fleeing a sexually abusive uncle.

“It’s full of hope and it begins with neither character has any expectations for hope … they’re turned inward and rudderless,” says Greenwood, whose baritone is gravelly and confident in person.

Green praises his “WildLike” star for his physical sense on a set as well as Greenwood’s knack for digging deeper into his characters.

“He and I went through the script for two days literally line by line,” Green says.

Greenwood Bullish on Indies in 2015

Movies like “WildLike,” which along with “Elephant Song” should reach movie goers in 2015, remain a tough sell in today’s film climate. Greenwood thinks the odds of audiences finding both films are far better today than before, tentpole competition be darned.

“We stand more of a chance of getting out there than 20 years ago,” he says, thanks to streaming, VOD outlets and other tech-powered media. In the past, maybe 500 or so people would catch it at a festival and it would fade away, he adds.

Greenwood visited Colorado after wrapping his scenes in “Truth,” the upcoming film starring Robert Redford as beleaguered anchor Dan Rather. Greenwood isn’t an above the title type actor like Redford or co-star Cate Blanchett, nor does he appear eager to assume such a cultural slot.

“I’m plenty famous … I don’t think anybody really enjoy fame,” he says. “Only thing famous is good for is attracting tentpole kind of participation, I guess.”

He’s not against the occasional big budget feature. Take “Star Trek,” the triumphant 2009 reboot of the space franchise where he played the franchise’s famous Capt. Pike.

“The making of it is fun, the sets are gargantuan and spectacular … and with J.J. [Abrams] there’s such a great vibe,” he says. “You just wanna go to work. Nobody hangs out in their trailers … everybody’s hanging out at craft service, telling jokes, hanging out. It’s a good, family vibe.”

A-List Star Does the Right Thing

At a time when celebrities get on the wrong side of TMZ too often, Greenwood shared an example of a mega-star with his heart in the right place.

He had landed the juicy role of President John F. Kennedy in the 2000 drama “13 Days,” but he had been spending too much time doing drywall and other house-based chores on on weekends. That may have led to a sinus flare-up that left him unable to replicate Kennedy’s signature voice. 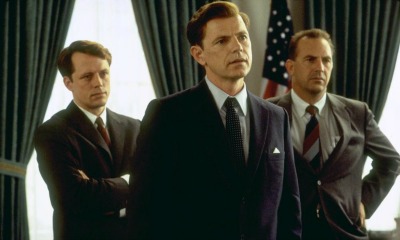 He was given a few days off to rest his voice, but when he returned he still couldn’t produce the accent required for the part.

“I walked into the [pretend] Oval Office … I knew [my voice] was not good, but I thought I was getting away with it,” he recalls. One of the film producers stopped the shoot, a moment he likens to a pitcher get yanked from the game by his manager.

“She put her arms around me and said, ‘Go home.’ I was crushed, just crushed,” he says. Greenwood retreated to his trailer, tears of frustration in his eyes, when he heard a knock on the door.

“He opens the door, takes one look at my face and says, ‘oh, man, c’mon, dude. Don’t sweat it. I’ve been in way worse situations. Go home. Get better. We’ll schedule something,’” he recalls. “It made a huge difference to me, that he would take the time to chase me down … you could see all his sympathy.”

A few days later, Greenwood’s voice returned to full strength and he nailed the part.

Today, Greenwood continues working on big-screen productions and the occasional TV series (like HBO’s “John from Cincinatti”). Just don’t expect him to grab every role that lands on his agent’s desk.

“I’m more judicious now about what I choose to do,” he says. “I worked a lot when I was younger because I tied my self-esteem to working independent of what the project was about. I ended up working on stuff that was really forgettable. I do that less now.”

Less can still be more when it comes to his resume.