A.J. Rice, CEO of Publius PR and a veteran radio producer, understands the threat woke poses to western culture. Rice’s “The Woking Dead” captures it all, from virtue signaling gone wild to the “mostly peaceful” riots of 2020 which the media and Left excused in unison.

HiT reached out to Rice about the new book, how “Saturday Night Live” lost its way and why he’s hopeful for a woke-free future.

HiT: It’s impossible to discuss woke without mentioning pop culture. Your book shares an important note about the long-running “Jeopardy” program and why it matters. Can you detail why a certain show champ got attacked for all the wrong reasons?

Why James Holzhauer is bad for “Jeopardy!” (Column) https://t.co/VcbBo0Xl8h pic.twitter.com/hWuZJzsWjA

This was the everyone-gets-a-trophy crowd trying to take trophies away from a guy who earned them, while he was still earning them. This is where woke pop culture has taken us. It celebrates victims and denigrates achievers.

Look how they treat Trump, who built an empire and provided thousands of jobs before ever entering politics.

HiT: Morrissey is no Sean Hannity, but he’s come under assault from the woke mob in recent years. Why are these attacks noteworthy in the bigger pop culture picture?

Rice: Morrissey is an iconoclast. When he was going after the monarchy, pop culture celebrated him. But when he suggested that England might not want unfettered immigration which could change the character of the country, pop culture tried to cancel him.

The attacks on Morrissey prove that no one is safe from the woke zombie mob.

Whatever you said or did before doesn’t matter. He’s a sexually fluid leftist vegan. He’s a nonconformist in his music and everything else.

But wokeness cannot abide anyone who figures out that the freedoms we used to take for granted are precious and deserve to be defended. He’s defended them and the zombies went on the attack.

HiT: This site has noted how the woke mob doesn’t try to cancel hit men movies, even though they kill for a living and skip the judicial system entirely. There’s something similar going on with Tony Soprano, no? You’re surprised the woke mob hasn’t whacked him yet…

Rice: Tony Soprano was everything the wokes despise. He was a masculine, straight white man who was tough, fatherly and not afraid to drive a big gas-guzzling SUV. He used guns frequently to make his points. He used the phrase “made men.”

You can’t say that now, so he would need a new phrase. “Made human” maybe? That’s not inclusive of those who identify as animals. It is surprising that wokes haven’t gone after mob movies but I wouldn’t take that for granted. They’ve gone after decades-old movies and gotten warning labels slapped on them.

HiT: Your book savages the new “diversity” rules in the Oscars competition. Why is this manufactured wokeism so detrimental to the creative process, and what impact will it have on awards-season fare?

Rice: The Oscars have literally thrown away achievement for the sake of diversity. Your film won’t even be considered for an award unless it meets very specific racial, which is really racist, criteria for casting and behind-the-scenes staffing. That’s a private entity doing a political force’s bidding and it, by itself, waters down the value of the award.

The best films are not being awarded unless they’re politicall blessed. It’s not about achievement anymore. It’s about politics.

Despite the drama, the ratings for this years Oscars were the second lowest in the event’s history. https://t.co/t8pYjWjjrG

We’re already seeing the effect of this. Americans are tuning out the Oscars and all other awards shows. They’re tired of everything getting politicized in one, boring, predictable, woke direction. And they’re tired of being lectured to by people who have no idea what life is really like for most of us. Americans are effectively telling the political Oscars to take their trophies and shove ’em.

HiT: The war on 2019’s “Joker” was … astounding. The press ate up every morsel of pre-release news and gossip, but right before it opened the same media declared war on the film. What changed?

Rice: The media’s reaction to “The Joker” was very telling. The leftist media tried to tie it to the guy who shot up a movie theater a few years ago. But there are a couple of serious problems with that. First, that guy dyed his hair but he never called himself the “Joker.” Media did, to give him a brand, and because he shot up a theater showing a Batman film.

Two, Joaquin Phoenix’s Joker had nothing at all to do with that guy. The film is a raw depiction of mental illness. But media including The New Republic, which used to be thoughtful and interesting but is now anti-republic and woke, declared all-out war on “The Joker.”

It wasn’t the most violent film we’ve ever had, it didn’t have the most gratuitous blood or sex, but because it could somehow be very loosely and dishonestly tied to a tragic event and politicized, media used it and the victims of that event to make some twisted political point.

In the end, they even flirted with banning that film or shunning anyone who saw it, which is very dangerous for free speech and expression. But too many in the media have abandoned that. They only believe in free speech when they’re speaking. The rest of us should just shut up.

HiT: Your book touches on AOC and how comedians won’t even joke about her… at what point does “SNL” and late night TV decide it’s time to mock both parties again, or has that balanced ship sailed? 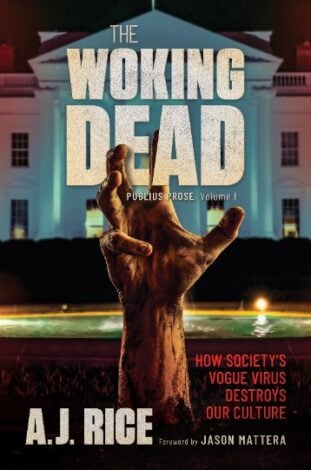 Rice: AOC sounds like a precocious tween who read a couple of articles in Teen Vogue and thinks she’s smart now. She’s not very bright, she’s wholly manufactured, poorly educated, and offers nothing at all in the way of interesting or original thought. She knows nothing about how the real world works.

This is a woman who was amazed by the garbage disposal in her apartment. She provides an endless vein of comedy for anyone brave enough to make jokes about her.

And I say brave enough not because she’s smart enough to hit back, but because if you joke about AOC, the woke media will come down on you fast and accuse you of racism, misogyny, all the usual phobias, everything.

She’s untouchable despite being a famous moron.

As for “SNL,” they won’t touch anything left of center anymore, which makes them boring. Just this week Kamala Harris went on a hilarious riff about the Webb Telescope with US military at the Korean DMZ, before she accidentally declared a US alliance with North Korea.

KAMALA HARRIS: “The United States shares a very important relationship, which is an alliance with the Republic of North Korea.” pic.twitter.com/H2dI5UYOlo

That’s very disturbing but it’s also very funny. Will “SNL” joke about it? Kimmel? No, because they’re leftist cowards.

HiT: The vast majority of stars do as they are told. They don’t fight back or question the woke mindset. Those that do, like Gina Carano, are swiftly punished for their thoughts. Do you see any light at the end of this tunnel? Or will the fight against woke have to come from outside the Hollywood ecosystem?

Rice: There seems to be an unwritten but strongly enforced rule in entertainment and Hollywood that if you want to succeed you will be a hard-core leftist.

Jennifer Lawrence didn’t sound like a leftist when she first hit it big, she talked about family and normal life in Kentucky.

Taylor Swift got badgered about politics by the media because she didn’t want to talk about politics early in her career. She just wanted to shut up and sing. Now both are out front as leftists. Did they bow to pressure? It sure looks like it. They sound like cartoon leftists spouting talking points they may not even really understand. Long-term this is unhealthy for creativity and freedom.

Diversity is our strength, the left says, but they only mean skin color, not diverse or new ideas. That’s blatantly and openly racist, but they don’t care and no one calls them out on it.

Hollywood is probably irredeemably woke now. The fight for real freedom is coming from outside Hollywood’s house, not inside, but there are some signs of hope. Gina Carano has a deal with Daily Wire to make movies. Some of her “Star Wars” co-stars want her back, and Jon Favreau and Dave Filoni have defended her and others who step outside Hollywood’s box, such as Chris Pratt.

Americans will have to decide how much woke we’ll put up with. It doesn’t produce interesting or funny entertainment and never will. Will we fork over our hard-earned dollars to see our country, our faith, our families, our way of life relentlessly denigrated? We have for a long time but we won’t forever.