Is “Gone with the Wind” the canary in the Cancel Culture coal mine?

The 1939 screen classic got yanked from the HBO Max platform earlier this year after a black screenwriter suggested its portrayal of the Civil War South doesn’t sufficiently capture slavery’s horrors.

Then, days later, the Oscar-winning film returned with an “historical context” prologue attempting to educate viewers on the “proper” way to enjoy the movie.

The move came as woke culture writers increasingly take older films to task for being “problematic.” Even Molly Ringwald, who became a superstar in the 1980s thanks to director John Hughes, shredded her own movies as being insufficiently woke.

“Blazing Saddles,” a film using tough language to torch racism, also came under fresh scrutiny in recent weeks. HBO Max added a disclaimer to that film, too, attempting to explain why director Mel Brooks used racist verbiage within the context of the comedy.

[Jacqueline Stewart, University of Chicago cinema professor and Turner Classic Movies host].acknowledges that many people think of the movie as “one of the greatest comedies of all time.” She also states the obvious — that “the issue of race is front and center,” noting that “racist language and attitudes pervade the film.”

Stewart goes on to point out that the racist characters are portrayed as ignorant and small-minded, and that the characters played by Cleavon Little and Gene Wilder give a more enlightened perspective.

Many film fans, aghast at this precedent, scurried to Amazon and similar outlets to buy hard copies of these titles. Today’s warning labels could give way to complete censorship, they feared. Select titles saw an instant bump in physical media sales.

RELATED: Nick Cancel Reminds Us Why Cancel Culture Is a Joke

Now, it seems those warning labels are coming for physical media, too. A Facebook friend of this reporter ordered “Gone with the Wind” from Amazon recently and posted an image of the package, front and back. Here’s what he found on it: 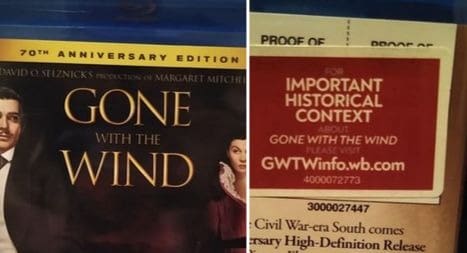 If you visit the web site, here’s what you can read.

“Gone with the Wind” is a product of its time and depicts racial and ethnic prejudices that have, unfortunately, been commonplace in American society. These racist depictions were wrong then and are wrong today.

To create a more just, equitable, and inclusive future, we must first acknowledge and understand our history … we hope watching it opens up discussion about the roots of institutionalized racism that are still prevalent today. To actively dismantle these systems, we encourage using all the tools available including close examination of racist themes depicted in this film.

Will more warning labels follow? Who will write them? Will future hard copy editions of “Gone with the Wind,” and other classic titles, feature “warnings” at the start of the films in place of these stickers? Will consumers be able to skip these features?