From the moment I heard Stanley Kubrick was making another film, I grasped every nugget of information I could find on the project. Tom Cruise let it slide, during a 1996 Premiere Magazine interview, that he and his then-wife, Nicole Kidman, were flying to London to make a film with Kubrick about “sexual obsession and jealousy.”

Then for years, I heard absolutely nothing. This was in the late ’90s and the early days of Internet saturation on advanced film coverage. The closed sets, sworn secrecy and impenetrable cloak of privacy around Kubrick’s endeavor allowed for the film’s production to carry out in a complete media blackout.

Rumors trickled through, and they were wild (Tom Cruise is wearing a dress! He and Nicole are playing junkies!) and, for the most part, completely untrue. I saved every newspaper clipping that surfaced between ’96-’99 on the film, which is still on record for having the longest shoot in film history.

Then, in early 1999, Warner Brothers announced that the film would open July 16. Not long after, Kubrick died and the film became not merely an event, but an essential, final glimpse at the creativity of a master filmmaker. With months of trailers depicting Cruise and Kidman, shirtless and kissing passionately, no one knew exactly what to expect.

I saw the film on opening night, with my college buddy, Ben, who was as thoroughly intrigued as I was. For most summer movie film nerds, “The Phantom Menace” was the gotta-see-it event of the year. For everyone else, it was “Eyes Wide Shut.”

As Ben and I walked into the theater, I asked the usher what he’d heard. He told us, “the projectionist didn’t like it, and he’s a big Kubrick fan.”

Once Ben and I sat down in our seats, in a lush, old-fashioned movie theater (with velvet curtains and decor right out of the “silencio” theater in “Mulholland Dr.”), I turned to him right before the  lights went down and said, “I can’t believe the day finally came that we’re seeing this thing!” Once the lights came back up, my initial impression that I wrote down was “deeply disturbing, thrilling and, easily, the best film of 1999.” 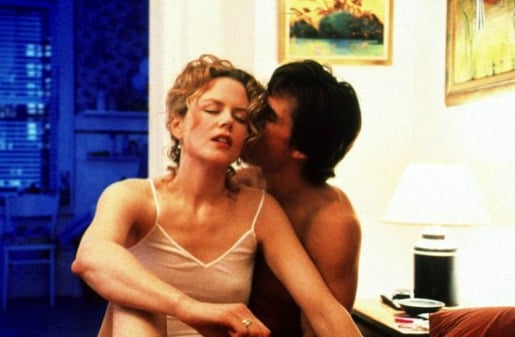 The story, based on a rich, deeply Freudian work by Austrian writer Arthur Schnitzler named “Traumnovelle” (translated as “Dream Story”- note the title), takes place in New York’s upper class. We meet Dr. Bill and Alice Harford (Cruise and Kidman), whose seemingly enviable marriage gives way to, yes, sexual obsession and jealousy. Alice’s playful, drug-fueled confession to her husband of missed opportunity at infidelity pierce’s Bill’s hermetically sealed bubble of privileged complacency. A phone call sends Bill out into the city, where his every encounter introduces a possible sexual encounter.

Even in a banner year, in which “Fight Club,” “American Beauty,” “Being John Malkovich,” “Magnolia,” “The Matrix,” “Office Space,” “The Red Violin,” “Three Kings,” and “The Sixth Sense” were released, “Eyes Wide Shut” captivated me more.

I wrote about that in an article for my college paper, and this is what got me in trouble.

My piece on “Eyes Wide Shut” being the best film of the year didn’t go over well at the private Christian college I was attending. Hate mail is one thing. I had classmates (some of which I knew) stop me in the cafeteria, confronting me. It seemed the movie angered everyone from those who actually saw it, to those who didn’t and thought of it as “that dirty movie with Jerry Maguire.”

I sort of met my future wife over my article. Julia had been reading my pieces for the college paper but didn’t know who I was. I was introduced to her at a party and her first words to me were, “Oh, you’re that movie critic guy.” From the disdain in her voice, I knew she remembered I wrote that “Eyes Wide Shut” endorsement. Our relationship survived that initial encounter, but it wasn’t the last time my odd association with the film made people wince when they saw me.

“Eyes Wide Shut” made a lot of people angry, confused and disappointed at first glance but offers more and more with every subsequent view. Just like every other Kubrick film.

Like most of the director’s works, the overall meaning is kept between the film and filmmaker, while we’re left to unlock the film’s vast secrets and allow our own personal baggage to merge with Dr. Bill’s. 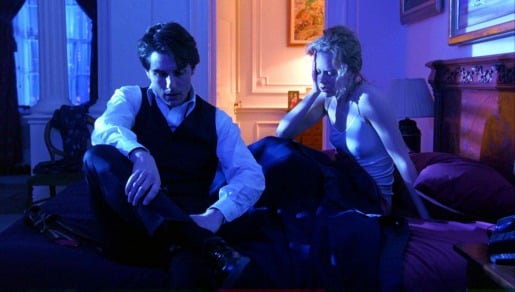 Seeing it today, without years of accumulating hype and the it-was-weird-and-not-sexy-enough knee jerk reactions of its initial release, it doesn’t feel like anything from the ’90s, or America, but something smaller, stranger and European.

Kubrick’s quiet, sinister and moving film is, surprisingly, an earnest ode to marriage and the dangers of giving into the temptation of infidelity. Cruise, in a performance stripped of his usual all-American boisterousness, has never been better and beautifully plays a wounded, insecure everyman.

Kidman’s small but powerful turn is entrancing and so is Kubrick’s filmmaking, in which every color, camera movement, sound, and set decoration seems precisely modified and perfected by a master of cinema.

The story is worth experiencing without any prior knowledge, though the uninitiated will likely be shocked and possibly confused. For those giving this a first or second try, look for these details:

Barry Wurst II is a senior editor & film critic at MAUIWatch. He also writes film reviews for Maui Time Weekly, and was a film class instructor at the University of Colorado in Colorado Springs (UCCS). Wurst has been published in Bright Lights Film Journal and in other film-related websites, and is listed on Rotten Tomatoes. He co-hosts podcasts for Screengeeks.com, Orphaned Entertainment and is currently featured in The NERDWatch, the new MAUIWatch Podcast. Please check out his weekly Looking Back column in MAUIWatch, covering various films of considerable or little cultural value and his entire catalog of film reviews and articles written for Maui Time Weekly.