I grew up with the horror/slasher films of the 1980s, the ones triggered by John Carpenter’s “Halloween.”

Actually, the truth is that I didn’t watch very many of them. The slash-and-gorefests never really did very much for me. My taste leaned towards horror films that did something different — something that was exciting and unusual in some way.

Forty years after “Halloween,” it’s becoming increasingly difficult to accomplish something inventive in the genre. That’s why I was so pleased to see “St. Agatha,” the new film from director Darren Lynn Bousman (“Saw II-IV,” “Mother’s Day,” “The Tension Experience”), delivers as it does. 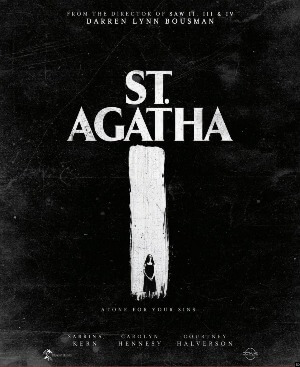 “St. Agatha” is a twisted treat – a claustrophobic nightmare that continually ramps up the tension until its delicious, delightfully inventive climax.

When Hope Fades to Black

The year is 1957, and the Agatha of the film’s title refers to the character played by Sabrina Kern (“The Tension Experience”). She’s a waifish blonde carrying both an unborn baby and a tremendous amount of guilt over the accidental death of her baby brother.

When her options for a self-sustained life run out, thanks to a ne’er-do-well boyfriend and some poor life choices, she takes refuge in a remote convent.

The nuns are not the most welcoming lot, but pregnant beggars can’t be choosers. Perhaps a little discipline might be good for the wayward Agatha at this point in her life.

The timing also seems good for the nuns to bring another lost young woman into their fold, as one of the other pregnant young women there had apparently just given birth and departed.

Of course, this is a horror movie, so we are instantly concerned about the nature of this “departure”…and well we should be. For all seems well and good, if perhaps a bit strict with regards to behavior, but it doesn’t take poor Agatha very long to realize that things are not exactly what they seem.

Indeed, Mother Superior (Carolyn Hennesy) is running a lot more than just a refuge for young pregnant women. Before long, she reneges on her promise that Agatha may leave anytime.

Welcome to the Convent California.

A bottle film (as I like to call them), in which our protagonist finds herself trapped by some domineering antagonist, lives and dies on whether or not I identify enough with the protagonist. What I would do in the same situation? Setting aside the fact that I would not be a pregnant woman in a convent, I felt gripped in the same vise as poor Agatha.

Naturally, things get progressively worse, and we are left to wonder how Agatha is ever going to get out of here, if at all.

Horror Fans Know What They Crave

“St. Agatha” has all the elements one wants in a horror film that is both inventive and just plain fun. It has gory and gross-out moments, dark humor plus a clever, diabolical script. Let’s not forget a terrific ensemble cast.

Anyone who knows the work of screenwriter Clint Sears (“Crow’s Blood,” “The Tension Experience,” “The Lust Experience”) will find his fingerprints over every page of this script. The story is perfectly structured. The dialogue is crisp and tart.

Most of all, however, the script and the film keep raising the stakes at every turn, tightening the screws at just the right moments, and elevating the suspense to the point where the audience wonders just how much more Agatha is going to be able to endure.

This is aided in no small part by Bousman’s direction. He knows when to deliver those moments when you clench your teeth, when you wince, when and how to feel for the young women trapped in the convent, and most of all, when you wonder “they’re not really going to go there, are they?”

And then they do.

Yet, writing and direction mean nothing without actors able to execute performance consistent both with the film’s tone, and with their own characters. I personally believe comedies and horror films to be the most challenging for even the best actors.

The Real Secret Behind the Horror Genre

Horror films are rarely grounded in the reality that we live in. In a horror film that works, as “St. Agatha” does, the material needs to be either underplayed or heightened in just the right manner, or the film risks spinning off into parody, goes over the top, or doesn’t deliver the chills.

Fortunately, there is an entire coven of wonderfully talented actresses at the center of the film.

Kern helps to ground the film initially, by giving us a young woman we genuinely care about, who seems very out of her depth. Yet when things get hairy, she’s terrific at playing tortured, terrified, and browbeaten — yet never without sacrificing the core strength that is at the center of her character.

Hennesy (“True Blood,” “Revenge,” “General Hospital”) offers such an imperious and domineering presence as Mother Superior that Cersei Lannister wouldn’t stand a chance against her. This is a part that a less-talented actress would go over the top with. Instead, Hennessey plays her as a credibly disguised psychopath, a woman who thrives on power and sadism, and yet has a very specific purpose for every single thing she does.

The cherubic, kind face of Trin Miller (“Captain Fantastic”) is perfect cover for Mother Superior’s fierce, loyal right-hand. Miller is cast deceptively against type, allowing her the latitude to fill the role of a ruthlessly practical individual who clearly understands the tenuous line she walks in the convent.

Courtney Halverson, Lindsay Seim, and Hannah Fierman are the trio of pregnant unfortunates whom Kern meets at the convent. Bousman may have found the perfect three actresses to play the roles of these terrified women, each of whom deliver such profound sadness and innocence that we cannot help but be filled with empathy.

These three sisters are counter-pointed with three vicious subordinates to Mother Superior – Candy Rachor, Marilyn Light, and Marsha Fee Berger are so grim and heartless that they round out the convent cast like a trio of bitter pills.

“St. Agatha” is a gleefully sour bite of a rotten Granny Smith apple. It’s a horror film with brains and atmosphere that will undoubtedly satisfy genre fans.