Theater has been forced to evolve. “Immersive theatre” is that new form, in which participants become active within the drama itself. “Sleep No More” helped pioneer this form in New York six years ago, yet it ultimately lacks a thoroughly realized emotional experience.

However, “The Tension Experience: Ascension,” a new Los Angeles production, not only fulfills that show’s potential, it will one day be acclaimed as a seminal production in American theater.

This is not hyperbole.

I posted a review of my first visit to “The Tension Experience.” Please read it so you can join me on the next part of the journey.

This article offers a spoiler-free review of my second visit, which was 100 percent different. It’s why “The Tension Experience” is such a groundbreaking production.

Imagine being thrust into a psychological thriller in which you are the star, whether you like it or not.

Be warned: you cannot just suspend disbelief as you begin “The Tension Experience.” You must submit to the reality that has been lovingly prepared for you. If you attempt to stand outside of this world, its impact on you will be lessened, even rendered inert. 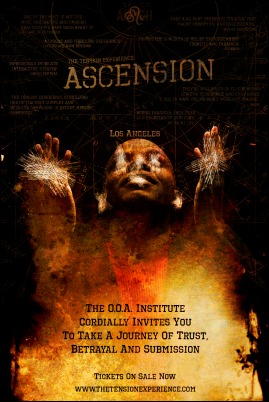 As before, I had to shed all connections to the outside world. My arrival, however, was expected.  Characters I had met before welcomed my return, but this visit would be very different, I was warned. Everyone knew I’d been there before. They all knew what I’d experienced. This visit was thus not only informed by the first, but developed in the second.

I was tested again, but this time the tests were more complex, more psychologically and emotionally probing – yet seemingly delivered with compassion. Perhaps it’s because those administering the challenges had been through the same thing at some point.

The questions, tests, and challenges were again designed to make me uncomfortable.

Yet this wasn’t just to make me squirm without purpose. Every moment – every single moment – was thematically consistent with the story. Pay attention, be aware, be present. That is what yields rewards inside “The OOA Institute,” but in real life, as well.

I learned more about a few characters, but was also introduced to new ones, each holding fresh secrets and insights into the OOA. In some cases, I was offered shocking insights into the Institute that scrambled my brain, forcing me to think back on the experiences I’d initially had and view them in an entirely new light.

The things I thought I had experienced were perhaps not what I’d initially imagined. Therefore, the choices I made that I’d also questioned at the time became twice as complex.

As for the lingering (and distressing) issues from my first visit – the male protective desire to rescue the woman in distress (the anima projection, for you Jungians), that storyline was resolved in three rather simple dramatic moments.

In one, I was told in no uncertain terms that I was not to concern myself with the women in question.  Another provided me an emotional closure.

And the third…I cannot speak of. I don’t think I ever will.

Yet none of this speaks to the emotional climax of the evening. Aristotle and the Greeks aimed for stories with dramatic catharsis, defined as, “an emotional discharge through which one achieves spiritual renewal or liberation from anxiety and stress, or any other radical change that leads to a person’s emotional rejuvenation.”

Catharsis is more than just feeling the relief at the end of a horror movie. It’s waking up the next day transformed. It comes in the form of getting married, seeing your child born or the death of a loved one.

You no longer reside in the world you once did. You feel almost as if you have a secret knowledge that those around you, ordering coffee at Starbucks, do not have. You are set apart from them.

“The Tension Experience” provided me with just such a catharsis, in a brief, quiet, but powerful moment. It was, truly, one of the greatest gifts I’ve ever received.

And that’s not hyperbole, either. 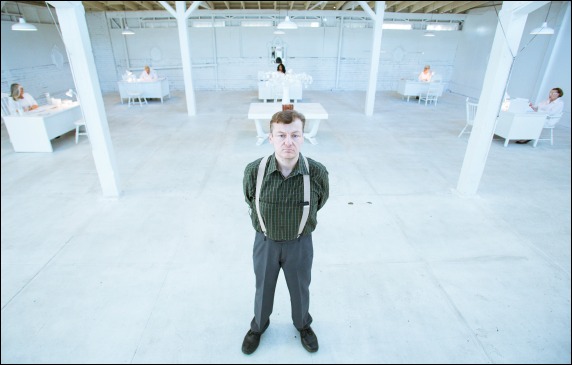 This was only possible because of the talents of every single member of the production team, particularly the perfectly-cast actors. They created and sustained this reality without a single false moment.

And so it was, as my second experience came to a close, distraught at a seemingly inevitable conclusion, I backed slowly away from the exit. The voices inside the OOA Institute shut out as its massive steel door closed up tight.

Why This ‘Experience’ Matters

Sounds like an actual cult, doesn’t it? The contrast is that a dangerous cult uses the words of freedom to create control of the individual. “The Tension Experience” uses the language of freedom, within an illusory construct, to deliver that freedom and return us to the real world, transformed.

The subtext of this piece is that disconnecting forms of communications is poisoning our culture. We have become a living, perpetual Milgram Experiment. Human contact is being severed and, with it, the capacity for compassion and discovery for oneself and others.

We cannot complain about the death of the culture and not support new media that has aspirations that are this high, that deliver on them, and most importantly, are apolitical. Millennials enjoy first-person entertainment experiences in increasingly elaborate video games and virtual reality.

“Young people,” one character told me in a moment referencing both the OOA and immersive theatre, “that’s who we want to get in here.”

Indeed, “The Tension Experience” will satisfy the extraverted desire for entertainment for younger people. Ideally, it will also force them to turn inward and discover their intrinsic value.

While “stars” flail about in overpriced Broadway shows, parroting the words of “famous” playwrights from their phoned-in, self-important plays, a set of true artists have accomplished the impossible in Los Angeles.

Forced to evolve, theatrical artists are responding to the call. It is incumbent on those who care about the evolution of the culture to support them.

“The Tension Experience: Ascension” runs through Nov. 13, although the producers hope to extend based on demand. Tickets can be purchased here.