It took five men to write “Neighbors 2: Sorority Rising.” But they weren’t alone.

Two women played a big role in the comedy sequel’s production. And how did that work out?

The sequel, starring Seth Rogen and Rose Byrne as parents battling partying college students, snared less than half of the original’s opening weekend haul. Over the Memorial Day weekend, “Neighbors 2” sank more than 50 percent from that tally.

In short, it’s already one of the summer’s biggest disappointments, commercially speaking. It’s hard to pinpoint why a particular film fails at the box office. The competition could be too stiff. The story simply didn’t warrant a sequel. Or the stars’ collective appeal isn’t what it was just a scant two years ago.

What’s crystal clear, though, is how politically correct posturing and the need to send a “message” left a serious mark on the stoner sequel.

It also suffocated some of the laughs found in the 2014 original.

A peek behind the scenes, courtesy of The New York Daily News, finds how the movie’s creative process was repeatedly interrupted. 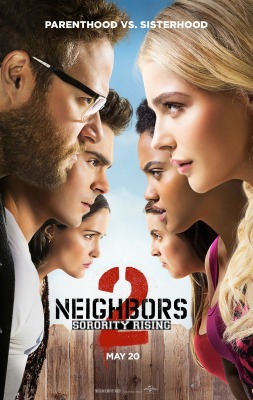 Maria Blasucci and Amanda Lund took part in a roundtable discussion connected to the script prior to production. They later graduated to script consultants, staying aboard the project to offer their advice along the way.

Or, as the newspaper puts it, provide “quality control.”

Director Nicholas Stoller, who previously gave us the terrific “Forgetting Sarah Marshall,” told the Daily News about his goal for the comedy sequel.

“I have two daughters and it was really important to me that when they’re old enough it’s something that I’m proud to show them, that it’s an empowering film,” he said.

That empowerment resulted in one of the more politically correct films of the modern era. Star/co-writer Rogen embraced the film’s feminism both behind the scenes and during the film’s promotional push.

He even recently admitted to being ashamed of some of the jokes he’s written in the past, like some of the banter heard in the 2007 smash “Superbad.” He called some of the dialogue “blatantly homophobic.”

It’s understandable that Hollywood players recognize the serious gender disparity in their industry. It’s not a liberal talking point. It’s reality. And we see it in almost every aspect of filmmaking today.

Why can’t men write quality roles for women without someone lurking over their shoulder? Woody Allen has been doing just that for decades. A good writer can tap into both sexes without scurrying for expert opinions.

And, of course, women are fully capable of writing three-dimensional male characters. The fact that this even needs to be said is silly. And depressing. It’s a sign of the times all the same.

Stoller recalls how one “Neighors 2” sequence got stripped thanks to the aforementioned consultants. The bit involved a “camel toe party,” which the writers assumed was the equivalent of a “boner party.”

Blasucci and Lund dismissed the idea, dubbing it “disgusting.” So you won’t see that sequence in the film.

Another revelation from the “Neighbors 2” interviews? The word “feminism” is poison to many, apparently.

Will the media start reflecting this now? 🤔https://t.co/d4YbRUrFwU

That gag met with stiff resistance from focus groups.

“When we tested it, the word feminism was so divisive to the audience that we literally had to cut the word out of the film,” Stoller says.

Yet they went ahead and made a movie that plays like feminism on steroids. And they wonder why the film is under-performing.

Movies with a Message

Lund recalled shooting the film’s tailgate sequence and being impressed by the enormity of the project.

“I can’t believe I’m on a movie this big that’s going to have an important message,” Lund says.

Audiences apparently cared less about the message they hoped to send. They just wanted to laugh.

The “Neighbors 2” project points to something more sinister than another box office disappointment. What if more movies are made this way? Could we see westerns where various special interest groups weigh in on the script during the production? Romantic comedies where “experts” decry the balance of power in the relationships on screen?

Maybe these experts will have even more say than Lund and Blasucci did on “Neighbors 2?”

If so, how much of that will impact the finished product?

It’s bad enough that comedians have to worry if sending the “wrong” tweet could seriously damage their careers. Now, filmmakers may wonder the same about the stories they write, the characters they create.

There’s nothing funny about the drip, drip drip attack on creative freedom, even in the name of “empowerment” and sending an “important message.”