This Richard Price-scripted follow-up to “The Hustler” (1961) continues the story of lifelong gambler “Fast” Eddie Felson, played by Paul Newman. While rarely mentioned as one of Scorsese’s best works, it’s a terrific sequel.

The Color of Money

The last time moviegoers saw Newman as Fast Eddie Felson in “The Hustler” (1959), he defeated Minnesota Fats (played by the Great One, Jackie Gleason) at the game of pool but at too high a personal cost, causing him to walk away from the game, presumably forever.

Playing pool was Felson at his best.

In “The Color of Money” (1986), decades later, he’s a much older and respected man. Felson is now a successful liquor salesman with a devoted girlfriend, though he clearly picks up a few “students” along the way the way. Felson randomly encounters the obnoxious but skilled Vincent (Tom Cruise), a pool player with enormous talent but no discipline.

Recognizing a younger version of himself, Felson drops everything and takes Vincent and his girlfriend Carmen (Mary Elizabeth Mastrantonio) on a road trip where he teaches these hustlers how to control not just the shots but the mental game of pool.

As Eddie teases, “money won is sweeter than money earned.”

The energy is there from the start. The cinematography by Michael Ballhaus gets down to the level of the eight ball, as the camera floats over the table and conveys the lightening crash of the colliding balls. A nice detail – Eddie hears Vincent before he sees him (“That’s a hellava slice!”)

The setting may be unusual for Scorsese, but the theme is consistent with his more famous works – namely, self-destructive men of power willing to bet everything (shades of “Casino”). Scorsese captures the feel of the pool halls – the musty smell of stale beer, the hushed voices amidst the clack of the pool balls and the stench of old wads of money. It lives in this world and presents it with unblinking authenticity.

The Cinematography of The Color of Money (1986)

Newman allows his own lived-in sense of understanding and weariness to be visible in his return to one of his most iconic characters (and, to be sure, “The Hustler” is one of his finest vehicles). There was a risk in returning to Felson but Newman’s performance matches the complexity of Price’s screenplay, which is less about who wins the game and more of the cost of going all-in with every game.

Newman probably deserved the Best Actor Academy Award for “Nobody’s Fool” (1994) more than this but no matter – he’s fantastic here. 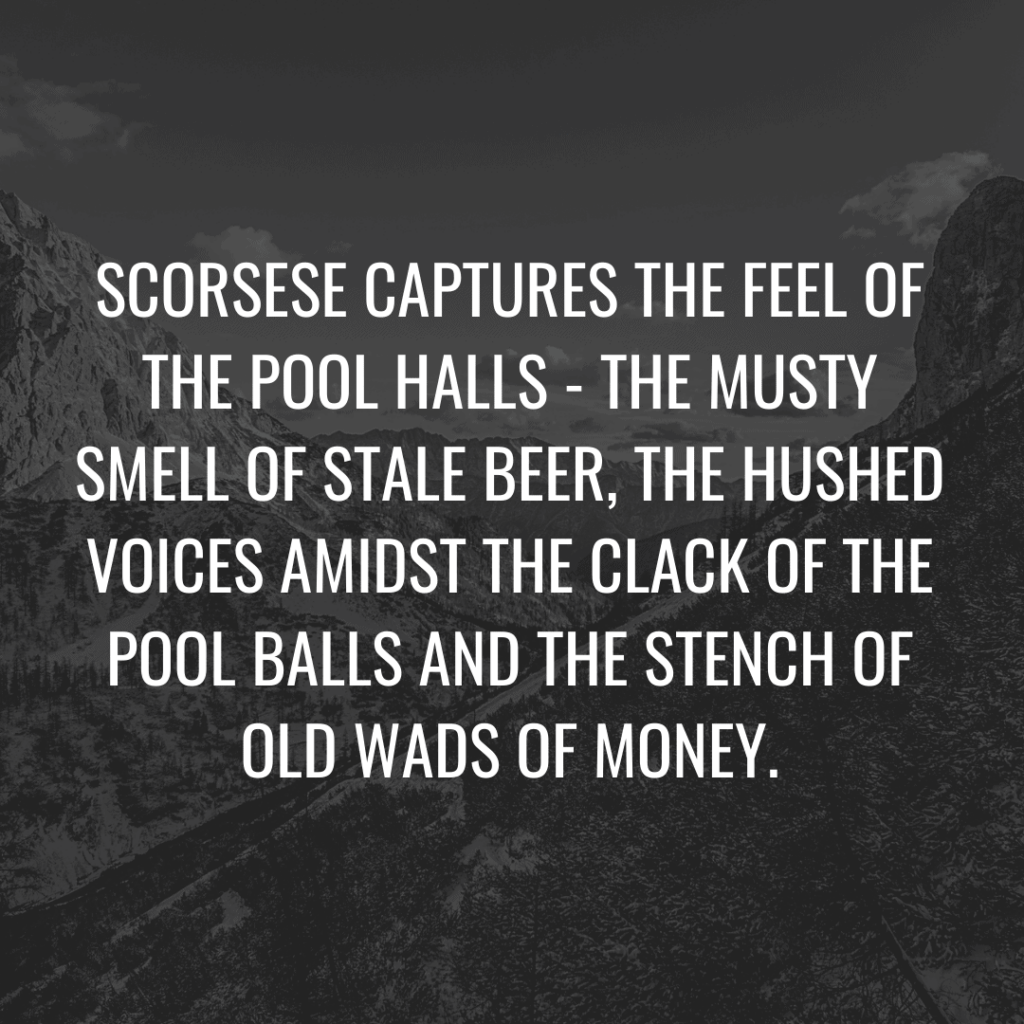 Cruise’s first film post-“Top Gun” feels almost like a commentary on his Mitch “Maverick” character. Vincent is, like Maverick, insanely cocky and overzealous but here, he’s insufferable. Best of all, Cruise doesn’t shy away from making this guy a likable (but never lovable) schmuck.

Cruise is electric in this and, best of all, never worries about making Vincent remotely sympathetic. Vincent is irritating, a “flake” and, even worse, an earnest kid in dire need of a father figure (note how he awkwardly tries to hug Felson over breakfast).

Even worse, it’s all too easy for Felson to get into Vincent’s head.

This was back before Cruise was in full movie star movie mode and took on characters that were not in control, incapable of beating everyone (or anyone), lacked zero discipline and needed a mentor to get by.

Cruise occasionally takes on a juicy role, but he appears no longer willing to take on character acting, which is a shame. He and Newman have real chemistry – watching Felson’s subtle grip of every room he walks into, contrasted with Vincent’s flamboyant screw ups, is to witness a great give and take between two generations of legendary film actors.

“The Color of Money” was only Mastrantonio’s second role (and her first in which she was up for an Oscar) but she’s a key to why the three-person dynamic works; Felson pleads with Carmen to help him “control” Vincent, but she’s every bit as cutthroat a con artist as he is.

Joe Rogan on "The Color of Money"

Forest Whitaker is only in this for a few minutes but manages to give a golden characterization. John Turturro’s gone-to-seed washed up protégée was Felson’s Vincent before the real thing came along. Turturro makes this figure a sad, neglected, tossed-off former surrogate son.

As he does in Stephen Frears’ “The Grifters” (another great drama about con artists), Scorsese provides the opening narration, in which he announces, “Luck is an art.” Price gives his dialog the snap and crackle of a great game of pool.

Price doesn’t always know what to do with the female characters, as Carmen’s troubled backstory is only hinted at and Helen Shaver as Janelle, Felson’s girlfriend, is around for moral support but seems like one of his hangs-on (she does call Vincent “a prick” immediately after meeting him, which means she’s a good judge of character).

Mastrantonio at least provides the lite film noir touches with a proper femme fatale, as her survivalist instincts suggest she could easily walk off with Felson if Vincent proves to be a total disappointment.

Scorsese made the film during an interesting period in his career: despite the acclaim of “Raging Bull,” the subsequent box office failure of “The King of Comedy” (1983) derailed the filmmaker’s trajectory. As a result of the poor box office (and a studio sensing controversy), Paramount Pictures canned Scorsese’s planned adaptation of Nikos Katzanzakis’ novel, “The Last Temptation of Christ.”

The director nursed his creative wounds by taking on “After Hours” (1985), the offbeat and unexpected comedy/thriller that recharged his filmmaker palette and is one of Scorsese’s most unexpected triumphs.

“The Color of Money” came next, providing an opportunity for Scorsese to make a studio film with big movie stars and a handsome budget. Typical of the director, the assignment was not impersonal or a sell-out film but rich with the expected tour de force filmmaking, complex character shading and grasp of its milieu that marks his other works.

The only overtly commercial touch here is the soundtrack, which is lacking any Rolling Stones tracks but sports Phil Collins and Eric Clapton.

An under-appreciated masterpiece, “The Color of Money” isn’t just an enthralling sequel but among the best follow-ups ever made. It’s not a remake, a redux or a bigger version of the original but a reunion – whatever happened to Fast Eddie Felson and was he ever able to get away from the thing that crippled his life, the game of pool?

The final scene is not the expected mano y mano big game we expect (and Price has been teasing) but a simple declaration on the part of Felson. He announces, “I’m Back.”

We don’t know if this is a good thing – after all, has he come full circle, back to the man he was before he beat Minnesota Fats? Or, perhaps it’s a declaration that he found who he was once again, someone who could control his life at a pool table.

However, you view it, this was a triumph for Scorsese, Cruise and The Hustler himself, Paul Newman.