The sculpture began in 1948 and is still unfinished. Even more worrisome is how, due to being created on pegmatite granite, the sculpture may not last and eventually fall away. Crazy Horse, while larger than Mt. Rushmore, lacks the iconic, classic lure of a row of Presidential heads and is best appreciated as an unfinished masterpiece and a grand work-in-progress that will likely never be completed.

The same can be said for Bill Forsyth’s “Being Human” (1994), a peculiar existential drama that is one of the forgotten, more curious titles on actor Robin Williams’ filmography. Forsyth, a Scottish filmmaker with a gift for understated, character-driven comedies, attempted to make his first big-budget Hollywood film with one of the biggest movie stars of the decade.

Forsyth’s concept was to tell the tale of five men named Hector, who live at different points in time, have similar struggles and strive to establish reliability, inner strength and, as a result, a family unit.

The first Hector is a cave man, while subsequent Hector incarnations take the form of a Roman slave, a nomad wandering the earth in search of love, a conquistador stranded on a beach and a modern-day father, trying to connect with his estranged children. 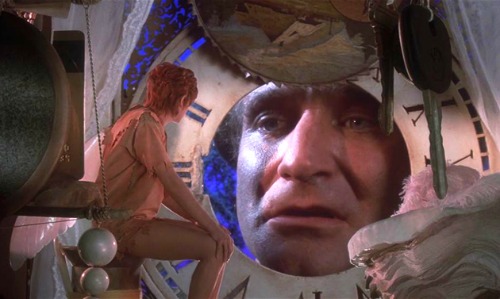 At this point in his career, Williams had established himself as an actor with enormous gifts for broad comedy (“Aladdin” and “Hook”), straight-faced dramas (“Awakenings” and “The World According to Garp”) or cleverly conceived pastiches of both (“Dead Poets Society” and “The Fisher King”).

Forsyth was best known for art house favorites such as “Local Hero,” “Gregory’s Girl” and the Burt Reynolds comeback vehicle “Breaking In.” He established himself as a thoughtful filmmaker with a gift for offbeat, observational humor and bringing out great performances from his actors. With the pairing of Forsyth and Williams in place, Warner Brother shelled out $50 million for what was neither a comedy, drama, nor an easily marketable Williams vehicle. Filming took place in Scotland, Morocco, England, New York and California on the madly ambitious film, which, when filming completed, had an initial running time of 160 minutes.

Reportedly, once the studio saw the finished product and began test screening the film, changes were ordered and Forsyth’s vision was compromised. “Being Human” was more a heady art film than the mass market Robin Williams film Warner Brothers had hoped for. “Reportedly” is the operative word, as little is known about what officially took place behind the scenes.

The studio had the film cut down to two hours, added an obtrusive narration and was dumped into theaters during the spring of 1994. It was released a mere four months after “Mrs. Doubtfire.” by far Williams’ top grossing vehicle (Williams has admitted that Mrs. Euphegenia Doubtfire’s voice was inspired by Forsyth’s Scottish brogue).

“Being Human” was met with instant audience and critical animosity. It was gone from theaters in weeks and became an unloved curiosity item on VHS.

Despite its reputation as a major financial flop and the film that sadly led to Forsyth’s long absence from filmmaking, the film deserves a look from adventurous filmgoers.

The tone established is whimsical and playful, without resorting to easy yuks, with the epic-sized narrative and large-scale period recreations contrasting nicely with the easy-going feel. It may be a big movie in terms of size and intentions but it never feels heavy-handed or lumbering. Likewise, Michael Gibbs’ lovely score never overreaches, finding a calm, connective theme for the vignettes.

DID YOU KNOW? Bill Forsyth shot a sequel to his charming 1981 film “Gregory’s Girl” in 1999 called “Gregory’s Two Girls.” Alas, The Guardian slammed it, saying the film’s plot reminds one of a “Scooby-Doo” episode.

Broken up into five distinct episodes, the stories never resort to gimmickry and transition nicely from one to the other.

The first Hector tale is perhaps the most problematic: even with a hairy Williams romping about with his close-knit family, playing cave people straight is a thankless task for any actor, particularly without dinosaurs stealing the spotlight. Caveman Hector finds his family stolen by a nearby tribe, which results in his feeble fumbling of a rescue attempt. The sequence may be odd and a shaky start for such a weird movie but the anguish on Williams’ face as he watches his family taken from him is heartbreaking. The setting and intent of the piece may not be entirely realized but the emotions both Williams and Forsyth are striving for come across: losing your family is a loss of identity, security and self-worth that cripples Hector.

Hector # 2 is a slave to an emotionally unstable Roman master (John Turturro), whose moment of indiscretion results in a desperate attempt at redemption by sacrificing a chicken as a religious sacrifice. When this doesn’t work, the master asks his slave to join him in a double-suicide; this segment, while uneven and as odd as it sounds, is a clever take on the unfortunate worker having to cover for his incompetent boss.

Hector #3 is a man smitten with a woman who doesn’t speak English. The two share a passionate affair, despite their inability to conquer the language barrier between them. This sequence is a heartfelt commentary on the barriers men and women find in everyday communication, as well as how each sex responds to the demands of a committed relationship.

Hector #4 strikingly resembles a healthier, youthful Don Quixote who finds himself and his crew shipwrecked on a desert island. Exchanging of shoes, a public hanging and fearful pondering of what may lie over the hill are what the crew turn to in order to kill time. The striking visuals in this segment can’t distract from how the storyline goes nowhere. This is the sole vignette which fails to clearly establish a metaphoric angle.

The best portion of the movie is saved for Hector #5, a modern-day yuppie who is given a weekend with his children, who he never met before. His estranged wife arranges a meeting and weekend getaway with his kids, but Hector is overly busy with his work commitments. A key plot point is Hector’s promise to his girlfriend (Lorraine Bracco) to deliver flowers to a client. Eventually, Hector gives his children the focus they need and the film itself finds its footing, albeit late in the game, as the existential mirror it has been striving to become all along.

The Hectors are not a reincarnation but five different versions of the same man, living in different eras. To provide a simplified explanation, there have presumably been other men throughout the past hundreds of years named Barry who also loved art, women and chocolate as much as I do (and not necessarily in that order) but had different family/ethnic backgrounds.

This is what “Being Human” explores in a careful balance of spiritual and scientific pondering. We all reflect on one another, presently and formerly, and constantly reenact the same trials that plagued our ancestors at different points in time. The recurring Hectors throughout the ages aren’t a supernatural occurrence, the film tells us, but a continuing practice of humankind seeking wisdom, acceptance and a family unit.

The dialogue wanders from dime-store philosophizing to some truly deep ponderings of why patterns exist, where our place in the universe is, who we are a reflection of and why we make the same stupid mistakes throughout human history. The film never comes to a definite conclusion but spins its wheels like an engrossing coffee shop bout of pontificating.

The Hectors have problems that aren’t easily solvable, Hollywood situations but genuine annoyances that are recognizable, shared experiences.

There are no easy Hollywood scenarios here, just universal struggles to establish competence, an upper hand and comfort. The hardships the Hectors feel don’t come with pat conclusions and sometimes end with the character either embracing or being trapped by his failures. Yet, the film is sometimes somber but never cruel, pat or uncaring about its’ protagonist.

While most mainstream Hollywood movies depict life with contempt (“Bad Boys II”), a defeatist attitude (“Fight Club”), a New Age bent of detachment (“The Big Lebowski”), Jungian awe (“Inception”), or as a vague prison of Darwinian cruelty (“Sin City”), “Being Human” offers a humble view of our place in the cosmos. This film is about the joy of being alive and the gift that comes with recognizing that privilege.

Rather than being the sort of film where one says “my problems are nowhere near as bad as his,”, the plight of the Hectors are recognizable, rich with human observation and in awe with the strength of the human soul to survive the constant torment that befalls them.

While the film’s sets, costumes, make-up and technical efforts are all extraordinary, the film’s lived-in quality is what makes it touching and immediate.

The film is deeply flawed all the same, with Theresa Russell’s narration over-emphasizing the subtle thematic points, in case the audience is lost. The sometimes choppy editing reminds us of the studio-imposed changes that resulted in a compromised and possibly unfinished film (the conclusion is open-ended and I don’t know if Forsythe intended it that way).

However, in spite of these flaws, “Being Human” is a real beauty of a film. It’s easy to see why Williams was drawn to such a tender, exploratory work. As troubled as the film’s history is, with obvious studio alterations hurting Forsyth’s vision at times, this is still such a tender, thoughtful work.

Several moments in the last vignette are blissful and poetic. As Hector #5’s daughter movingly tells him (and us) in the perfect final scene, “This is it, Dad. This is the best it will ever be. Enjoy it.”