Terry Gilliam’s “The Fisher King” is about a man who makes a living being a cruel voice on the radio and finds his life is over when he inadvertently pushes a listener too far.

Jeff Bridges plays Jack Lucas, a combo of Howard Stern, Don Imus and Alan Berg. When we meet Lucas, he’s on top of the world, literally in a high-rise apartment, as his hit radio show, attractive girlfriend, developing TV sitcom and reputation as a radio king gives him an untouchable veneer.

We have a hint of this existence being something of a self-loathing put-on, as the shadows within his recording studio resemble prison bars and Jack is such an extreme narcissist, you wonder how happy any of his fame has made him. When Jack learns that his words have inspired a man named Edwin Malnick to open fire on “yuppie scum” in a restaurant, it breaks him.

The Three Years Later transition takes Lucas from the top of skyscraper to street level, where he’s now barely assisting his girlfriend, Anne (Mercedes Ruehl), at her video store. A particularly bad night, where one of Jack’s “moods” and self-destructive impulses put him in a bad part of town, leads him to meeting Parry, played by Robin Williams.

Parry is homeless, announces himself as a knight, defends Jack like the ragtag street warrior that he is and is visibly out of his mind.

It doesn’t happen right away, but we eventually see that Jack is a good person, even a Knight by Parry’s standards, and that Parry’s mania isn’t some narrative quick fix but brought on by a terrible event that took him away from being a good and respected man named Henry Sagan.

Jack’s efforts to rehabilitate himself are initially noble, until he loses himself and must put away the things that he finds familiar.

Gilliam’s film is initially a hard movie to love, as we’re head-first in Lucas’ state of mind – his caustic narcissism and ego-driven life gives way to self-loathing. The sick kick of his on-air digs at humanity are hostile and ugly in a more down to earth setting.

The story finds its footing, and we get our bearings, when Parry and Jack confer in his basement. It turns out that the tragedy of Edwin Malnick extends to Parry, which horrifies Jack and gives him a renewed sense of purpose.

After all, Perry is, Jack’s words, “a very nice psychotic man.”

“The Fisher King” is kind of crazy, as it should be. Gilliam hasn’t softened the wilder touches of Richard LaGravenese’s truly original screenplay.

A great touch – when Perry first appears, it’s not cute. Williams is visibly improvising his way through certain moments, but Parry is a tragic figure, and the humor helps muffle the sadness of his existence.

LaGravenese loves his characters: note the sad moment where Anne sits by herself, having a pretend conversation with the absent Jack in her kitchen (it seems every character has a moment of madness, whether small or crippling).

I knew revisiting this movie would be emotional. I haven’t seen it since Williams died. My college roommate and I, both dedicated thespians, became students of the film and constantly re-read LaGravenese’s screenplay. It was a work I studied a great deal in the 1990s.

I wondered if the film would make me start crying at an unexpected moment and that wound up happening early on: Jack is leaving Perry behind in his basement home and Gilliam lingers on Parry. Once Parry finds himself once again alone, the sadness that seems to swallow him like a blanket once again is hard to watch.

“The Fisher King” is a compassionate look at madness – there aren’t wacky hobos or stock characters but real people. Gilliam allows us to glimpse the humanity beneath the dirt-covered surface.

The pitch was likely It’s Howard Stern meets Don Quixote, but even the thematic connections between this and Gilliam’s “Brazil,” “Monty Python and the Holy Grail” and Cervantes’ “Don Quixote can’t prepare you for the impact it leaves.  A quality most overlook- it’s a love story.

This takes you places American films rarely attempt. It humanizes the homeless with a compassion and understanding of the real individual beneath. Gilliam hasn’t made a film that simplifies and makes a joke of the daily struggles of the homeless.

Unlike the more serious-minded films that portray the homeless, in which actors ranging from Richard Gere to Jennifer Connelly play people living on the street, Gilliam refuses to deny these characters their dignity, sense of humor and inner fire.

It never mocks or makes a cabaret act out of the homeless. “The Fisher King” understands, profoundly, that there are real people out there on the street. Gilliam’s film is whimsical but not mawkish and isn’t afraid to show its’ characters at their most emotionally messy.

RELATED: How Gilliam’s ’12 Monkeys’ Ties into Our Current Pandemic

This is the perfect role for Williams, tapping into the bottomless well of comedy genius he seemingly had easy access to. There’s also the pathos, vulnerability and character layers that marks his finest work. Bridges, years before The Dude become his calling card, astonishes by digging so deep and fearlessly capturing everything that is awful and salvageable about Lucas, giving a completely different but every bit as essential turn as Williams.

Ruehl was a force of nature in Jonathan Demme’s “Married to the Mob” (1988) and won the Oscar for this film by providing her scenes with sticks of dramatic dynamite. As wild as the story gets, Ruehl plays it so real and is so good, she naturally keeps things grounded and relatable.

Amanda Plummer plays Lydia, the object of Parry’s affection, and her performance is every bit as unexpected as the character. Some have objected to Parry’s apparent stalking of Lydia, but Williams and Plummer take it in a different direction: Parry views the world in a topsy turvy way but his genuine affection for Lydia is among the few things he sees with clarity. 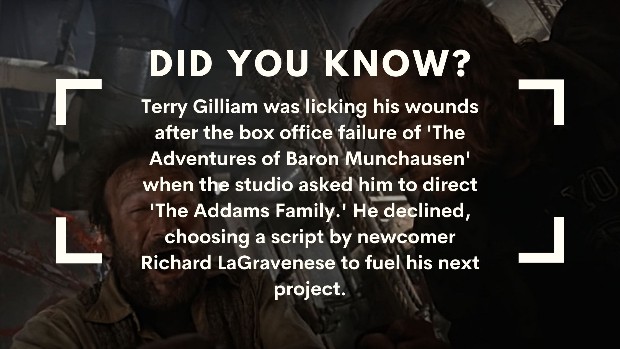 Michael Jeter is incredible in this; his character is hard to describe but I’ll admit that his final scene breaks me every time. So does his sensational music number, a scene that wouldn’t be out of place in a daring art film and somehow managed to sneak itself inside a major studio film.

Tom Waits has a fantastic cameo role and John DeLancie has a single scene as a character only slightly less loathsome than the one he played in “The Hand that Rocks the Cradle” the following year.

George Fenton’s score makes daring choices, reaching either the emotional heights or the caustic madness of any given moment. Roger Pratt’s camera gets into the character’s faces – at times its obtrusive but mostly it’s inquisitive. We’re watching Jack as closely as Parry.

The amazing “waltz” scene at Grand Central Station is among the most magical Gilliam has ever filmed. Yet, make no mistake, this is a pre-Giuliani Big Apple: New York looks filthy.

RELATED: The Dazzling Robin Williams Role We All Missed

The corkscrew chair that Parry makes Lydia on a whim and the date in the Chinese restaurant that follows (the latter is presented in 12 takes, with a wipe that connects the scenes) is sublime.

There’s a dazzling piece of writing at the bottom of the second act, where Lydia explains to Parry all the reasons why their perfect date is just the beginning of the end, and Parry counters with his version; it’s hilarious, hearing these characters provide their own idea of why this union either will or will not work out.

What comes after that is a set piece that hits you like a truck – its among Gilliam’s most riveting sequences, an emotional crescendo that leaves me numb and never fails to make me cry a great deal.

The ending, where Jack must, on some level, embrace the insanity that plagues Parry’s life, in order to save him, should have sunk the film. It’s a silly concept that Jack’s earnest effort to undertake a valiant quest will redeem them both.

It’s all about the execution: Gilliam, LaGravanese and Bridges aren’t kidding around. The humor and wonder of this sequence come from a human level. Like most of “The Fisher King,” it absolutely should not work but it does.

In THE FISHER KING, you’ll see a movie poster for another Terry Gilliam movie, BRAZIL, in the background of one of the shots. pic.twitter.com/WxjdLzPRUw

The final act of the film is Gilliam at his most stylish, as the fantasy elements become the most defined but, somehow, the film never self-destructs. Because the emotional stakes of the story are always defined and set so high, the moments of fantasy, as fantastic as they are, never overshadow the human element.

Does the film actually have the ending it says it does, or is the joke on us?

After all, Gilliam’s “Brazil” (1985) and “The Adventures of Baron Munchausen” (1989) teased us with the bliss of escape, only (particularly in the former example) showed us happy endings don’t work in a world that destroys lovers and dreamers.

Here, the uplift seems genuine, though I wonder, if not worry, that the bedside scene between Parry and Jack is the last of the film’s “true” moments, while what follows, beginning with a newspaper headline, signify we’re seeing a fantasy. I don’t think so – in this case, I believe Gilliam is giving us a victory that exists in the real world and not just the mind.