The car halts to a stop and, to our relief, we see a little kid is sitting in the road, inches from the grill of the vehicle. Franco’s Tomas Eldan, a writer, picks up the child and walks him back to his house up the road.

The boy’s mother (Charlotte Gainsbourg) answers the door and asks the boy a direct but chilling question. Suddenly, the characters and the audience realize the full weight of what has transpired. Eldan’s fateful encounter wasn’t as lucky as he thought.

Eldan’s life is forever tied to that incident, as his relationship with a lovely Russian (Rachel McAdams) and his literary career hit peaks and valleys. No matter how much time transpires or how much success he finds, his past is seemingly pursuing him.

Every Thing Will Be Fine Official Trailer #1 (2015) - James Franco, Rachel McAdams Movie HD
Wim Wenders’ film is every bit as loopy, dream-like and occasionally brilliant as his other, recent American films. Wenders is one of my favorite filmmakers; his best films (among them “Paris Texas” and “Wings of Desire”) are deservedly loved. He’s also made some strange, challenging, imperfect but breathtaking works (such as “Until the End of the World” and “The Million Dollar Hotel”) that deserve serious reconsideration. His latest will likely fall in the latter category.It’s an odd duck of a movie that may rub some viewers the wrong way.

The cinematography (by Benoit Debie) and the Bernard Hermann-esque music score (by Alexandre Desplat) are exquisite. The opening scene is among the best and most haunting Wenders has ever staged, and the women in the supporting cast are first-rate. While the story is intentionally novelistic, adapting an episodic approach to fit the tale of a writer, it’s also consistently involving. All of this goes a long way (though not always) at overshadowing how miscast Franco is in the lead role. 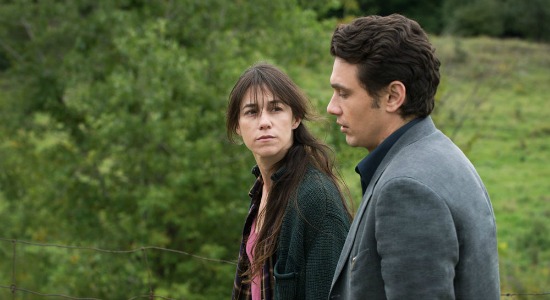 Franco’s character is described as emotionally withdrawn and distant, but it would be generous to assume that’s how he’s playing it. I like Franco, but here he seems barely engaged and has no reason for it. The character has depth, the material is good and, for Pete’s sake, he’s working with Wim Wenders!

While Franco displays no chemistry with either McAdams (who wisely dials down her character’s odd accent), Gainsbourg, or Marie-Josee Croze, he’s very good with Robert Naylor, who’s exceptional playing Gainsbourg’s troubled son. Their scene together in a diner is Franco’s best, most engaged in the entire film.

Even with the grim subject matter, “Every Thing” is a bit goofy, particularly during the early stretch when the title makes its way into the dialog more than once. Also, why did Wenders’ decide to shoot this in 3-D? I saw a 2-D version, was awestruck by the richness of the photography and at no point wished I were wearing quasi-Ray Bans to make the film look “better.”

DID YOU KNOW: Wim Wenders worked as a film critic before becoming an internationally acclaimed director.

At first, the film’s ending seems disappointing and simplistic, an unworthy capper for such serious material. I don’t believe what Wenders shows us is meant to be taken literally and isn’t exactly what transpires. The hackneyed writer quality of the wrap up suggests a fantasy Eldan is having, while something far more grim is taking place.

Wenders’ work as a filmmaker is varied, as his dramas, comedies, “road movies,” documentaries and experimental fusions of the four demonstrate a creative versatility. His ambitious films all sport a genuine compassion, a feel for lived-in environments and local color, and a genuine awe for visual beauty. “Every Thing Will Be Fine” is not unlike his “The End of Violence” or “Faraway, So Close,” in that it’s not one of his masterpieces but its best scenes exude the vision of a true cinematic master.