In particular, 1984 was the year the PTA famously picketed screenings of “Silent Night, Deadly Night” and Siskel & Ebert lambasted films they dubbed “Women in Danger” and “Dead Teenager Movies.”

Not every criticism against gory horror movies is unmerited, of course.

Many go over the line to appease a rowdy audience and provoke controversy. Most film historians now note that this type of 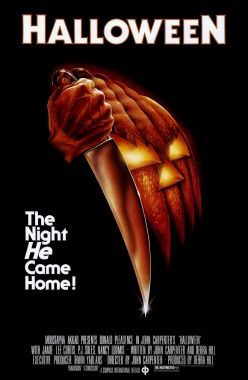 Some of my film scholar friends maintain the stance that slash equals trash. Other film lovers have come around.

For example, most consider “Halloween” a “masterpiece” today. Upon its initial release, one critic famously deemed it “a turkey for Thanksgiving.”

Thanks to post-modernist slasher movies (“Scream,” “The Cabin in the Woods”) and the popularity of movie boogeymen like Michael, Freddy and Jason, the slasher term is now a respectable genre label.

The word used to declare a film’s exploitative qualities. Now, it’s a casual way of describing a popular type of movie for teenagers.

Things have come full circle for the word “slasher,” as it’s now the name of a televised series. A year after the successful “Scream Queens” and “Scream: The Series” premiered, “Slasher” debuted on the Chiller network. It marked the first time the horror-themed channel aired their own original series.

I love this channel, which airs old episodes of “Tales of the Darkside” and “The Twilight Zone” and oodles of old and new scary movies. Making their flagship series a serialized compilation of their programming standards couldn’t be more perfect.

It’s akin to airing “Julie & Julia” on The Food Channel.

SLASHER | What’s It About? | Chiller

” begins with an unsettling sequence that owes a great deal to “Halloween.” On Halloween night in the town of Waterbury, a knock on the door reveals a tall, silent man dressed as a medieval executioner.

The man of the house invites the costumed Trick or Treater inside, believing it’s his friend. When the actual pal arrives moments later, The Executioner brutally murders everyone present.

Decades later, Sarah Bennett (Katie McGrath) the lone survivor of the attack, moves into her childhood home. She intends to put her past behind her and face her notorious legacy.

Not long after Sarah’s return, sightings of The Executioner begin … and so do more grisly murders.

While well produced all around, “Slasher” lacks the visual brilliance, powerhouse acting ensemble and richly cinematic qualities of either “American Horror Story” or “Hannibal.”

“Slasher” is far from the first series to focus on a serial murderer, as the infamous second season of “Nip/Tuck” focused on a masked killer. Soap operas and most police procedurals of the last 30 years have featured subplots involving disguised psychopaths on the loose.

The series was created by Aaron Martin, who wrote the entire first season, with every episode directed by Craig David Wallace.

What makes “Slasher” unique is that the first season is a stand-alone, self contained story about the origin and aftermath of The Executioner. What you have here, for better or worse, is a six and a half hour slasher movie.

FAST FACT: Katie McGrath says she prepped for her role in “Slasher” by reading as many Stephen King novels as time permitted.

On the plus side, it taps into the appeal of the genre: the story is presented as a whodunit, teasing its audience with a long list of potential culprits. Yet, it also gives into the excess that the title indicates. I could have gone my whole life without seeing a woman tied to a bed and having her hands and feet chopped off. Martin, on the other hand, gives us this and other nasty visuals in the pilot alone.

The horror genre has always been an envelope pusher in terms of content. The best horror films, like the best comedies, know how far to go before backing off.

“Slasher” may appease most Fangoria readers (a magazine I enjoy, by the way) but, as creative as the kill scenes are, they’re more grotesque than necessary. The show overall isn’t all that terrifying. It works best as a character-driven mystery.

The weaker segments intend to reprise the Lecter/Starling interrogation scenes in “The Silence of the Lambs.” Much better, though thinly developed, is a subplot right out of “Room.”

It helps that the cast performs with total conviction. McGrath is a strong, strikingly beautiful lead and Dean McDermott has some of the best scenes as a deliciously loathsome adversary for Bennett.

RELATED: Why ‘Hush’ Is Your New Horror Addiction

There are visual nods throughout that reference “Halloween,” “Friday the 13th” and “Phantasm,” to name a few, though the story overall resembles “Scream.”

” looks sharp and has a single featurette: an informative Behind the Scenes look at the series that evolves into a discussion on the actor’s favorite horror movies.

Whether “Slasher” returns for a second season (and, like “True Detective,” features a new cast and story) or only exists in this eight-episode collection, it definitely gives horror movie fans what they expect.

There’s a hint of mystery, a dollop of sex, some jump scares, a dozen suspects and lots and lots of slashings. For those who feel the latest “CSI” spinoff is too soft, have I got a series for you.