This isn’t an April Fool’s Day gag but a genuine recommendation, especially if you’re “not into scary movies.”

Die-hard horror fans, on the other hand, know that Fred Walton’s 1986 sleeper, which just turned 30 years old, is a real keeper. It’s also an essential genre entry, as it was decades ahead of its time and maintains its status as a nasty, spooky and sly slice n’ dicer.

A group of teens meet up on a ferry taking them to a weekend getaway. Their host, Muffy St. John (Deborah Foreman), puts them up in her gorgeous lakeside home. Being a practical joker, Muffy subjects her guests to a series of April Fool’s Day gags.

As the story progresses, Muffy (and the film itself) display an increasingly melancholy feel. Then, some of her guests start disappearing. There’s also those weird pictures in the basement…

At first, the dialogue is so juvenile, it’s easy to miss how smart Danilo Bach’s screenplay is. While the early banter is mostly obnoxious sex/partying-oriented or exposition-driven, there are references to Henrik Ibsen’s “Ghosts” and Agatha Christie tossed out as clues.

Bach, who also wrote “Beverly Hills Cop,” gives us a strong sense of the fears his characters are feeling, long before the horror kicks in. Some very ’80s dread is expressed, as members of Muffy’s party discuss their unsteady employment prospects and the terror of someone with the capability to “nuke us all until our shadows glow.”

The kids on Elm Street never spoke of such grown-up matters.

This may be Walton’s best film, if only because it’s a great horror film from start to finish. His 1979 “When a Stranger Calls” has a legendary opening sequence, but the rest of it sags. His 1993 sequel, “When a Stranger Calls Back,” has a terrifying introductory scene and a great ending, but good luck getting through the second act.

Walton’s helming of “April Fool’s Day” gives it a professional sheen and provided late ’80s audiences with a much needed jab to the stab n’ slash genre.

Charles Minsky is the film’s cinematographer, and he’s fashioned a good-looking movie. Minsky later filmed some of my favorite episodes of “Amazing Stories” before working frequently with Garry Marshall.

Look, it’s not “A Room With a View,” but there is a looseness and a workmanlike quality to the production (even the editing is tight and still a playful indicator of bad things about to happen).

Everyone in the cast seems young enough to be high school graduates, and no one is too model-like or overly mannered. Well, everyone except the frequently shirtless Ken Olandt, a former regular on “The Young & The Restless.”

RELATED: Why ‘The Witch’ Is the Best Horror in a Generation

Among the ensemble, there’s Griffin O’Neal (“The Escape Artist”), Amy Steel (“Friday the 13th Part II” survivor), Clayton Rohner (the detective in “The Relic”) and Deborah Goodrich (a Kristen Bell look-alike with a killer voice who no longer acts but is still involved in the arts).

Rohner’s character is frequently seen filming everything with one of those boxy VHS camcorders every late 20th century film student owned. The use of video heightens the sense of what is real versus the illusion of cinema. The teens are constantly cutting up in front of the camera but are surprisingly touching when we see them unguarded and vulnerable elsewhere. 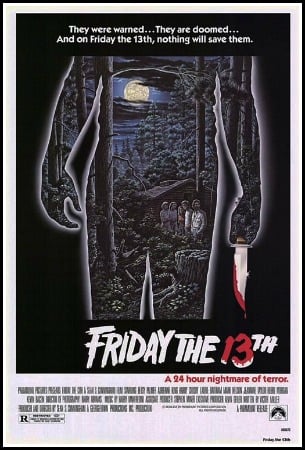 The set up is similar to “Friday the 13th,” both in the emphasis on the characters and in the rich atmosphere they inhabit. Much of “April Fool’s Day”  consists of tired teen horror movie clichés but the screenplay always seems aware of them and frequently twists audience expectations.

The same goes for the big reveal at the end, which I wouldn’t dream of spoiling. However, the very last scene is worth mentioning: both horror movie enthusiasts and Jeff Rovin’s novelization point to a much different, needlessly over complicated original ending.

While I’d love to see the original grand finale as much as any other fan of this cult favorite, the re-shot ending seems to be a more fitting conclusion. It’s beautifully shot and the film’s scariest scene, bringing full circle the theme of a child’s Jack in the Box, a seemingly innocent toy with a sinister surprise inside.

This is one of those movies that snuck up on me and other movie buffs, slowly finding an appreciative audience over time. While a minor success in theaters, it became a popular home rental and has a dedicated online following.

Both “Scream” and “The Cabin in the Woods” are the grandchildren of “April Fool’s Day.” If that isn’t enough to lure you to either revisit or see this for the first time, then I give up. Enjoy “A Room With a View” instead. The joke’s on you.