The Witch | Official Trailer HD | A24

The movie opens with an interesting juxtaposition — it’s the early 1600s during the Colonial Period of the United States (with beautifully rendered historical settings, clothing and language that history buffs will squee over).

The stern but loving father William (“Game of Thrones’” Ralph Ineson) is in the final moments of a religious argument with the Colony’s leaders and is asked to leave. Keep in mind that this implies that William is too fundamental even for the Puritans. And so we watch as William packs up his family of seven and heads out to find even greater religious freedom.

The Colony has been hacked out of the wilderness and sits behind 16 foot high fences and when the gates close, you feel the sharp step into pure wilderness like no movie in recent memory, including “The Revenant.” This is a backwards fall into the Garden of Eden, and we’re in for a bumpy ride.

The family resettles next to an imposing forest and begins to create a life free of any imposing religious persecution. Before long the clan comes face to face with pure evil.

More than Your Average Horror Movie

What is evil? What do you think?

Is it a tangible force like the devil roaming free, whispering into our ears? Maybe you believe something is inherently flawed in the human race? Where does personal accountability fit into all of this? Do you accept the excuse, “The devil made me do it!” If not, are individuals 100 percent responsible for everything they do and say?

If it’s all about the individual, then how do you account for those moments of unconscionable evil that are inexplicable, like beheadings in the Middle East or the massacre at Sandy Hook?

There seems to be a push in some New Age circles that evil doesn’t exist at all. “Evil” it turns out is just a judgmental perspective.

I had a friend say to me recently, “Greed is a Judeo-Christian imposition. Greed has a subjective judgment on others where it was originally intended as a corrective spiritual perspective.” So no greed?

Sinners in the Hands of an Angry ‘Witch?’

Every character “The Witch” is struggling with some form of sin:

The movie’s central tension comes from what happens to this religious family when things start to go wrong. Bad crops. Poor health. Bickering. It’s a test to their faith — will it bring them together or tear them apart?

In our secular, materialist world there’s a pop psychology tendency to see every “evil” act as a result of a bad childhood or bad wiring. This concretized perspective can’t possibly allow for any outside influences (God or the Devil) imposing on our lives, much less permit something like possession.

Author Elizabeth Gilbert explored how we’ve collapsed genius (which used to exist outside the individual in the form of a muse or daemon) down to something that exists solely within the individual during her TED talk.

As Gilbert notes, this belief puts tremendous pressure on the individual because they bear full responsibility for creativity when it’s there and when it isn’t.

Gilbert speaks of how in Ancient Greece they believed genius was something outside the individual, something the artist would be possessed by, thus freeing the individual from some of the pressure to be creative. Her TED talk is a call to better care for our creatives, but she skips over the question of if there can be two kinds of genius… evil and creative?

Noted depth psychologist James Hillman had a deeper take on the issue,

“Psychopathic behavior is a fundamentalist behavior: taking fantasies literally and also confusing the literal and the concrete. Now this is just what the Fundamentalist churches support: if your arm offend thee, cut it off. If your nose offend thee, get it straightened.” 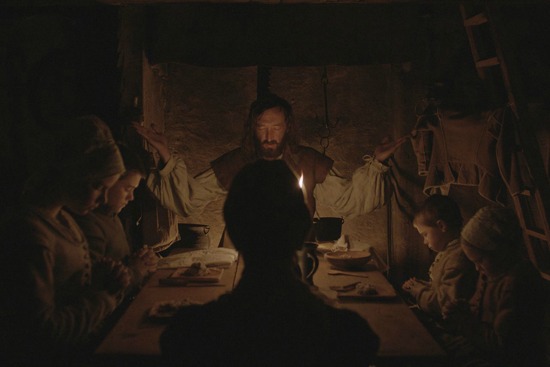 “The Witch” takes a fundamentalist approach, God is real and so is the Devil. The movie works on that level and is billed as a New England fable. It furthers the exploration by asking if evil is real, the Devil is real, and witches are real, then isn’t the foregone conclusion we all eventually turn on each other because who is without sin?

Hillman also said, “A terrorist is the product of our education that says that fantasy is not real, that says aesthetics is just for artists, that says soul is only for priests, imagination is trivial or dangerous and for crazies, and that reality, what we must adapt to, is the external world, a world that is dead. A terrorist is a result of this whole long process of wiping out the psyche.”

So which is it, do we need fantasy or not? Is God and the Devil real or not? I think Hillman is arguing for imagination and the psyche, against concretization when considering evil.

Fundamentalism of any kind is a loss of imagination and dangerous, yet we have an innocence surrounding our own fundamentalist beliefs that they can’t possibly harm others.

“People who refuse to acknowledge their own hatred, vindictiveness, and punitiveness are the most pernicious people to those they love. You can’t learn to control hostile impulses you won’t acknowledge having. The problem isn’t the urge to be mean, because everyone has this at some point. Problems arise when you deny it, because you’re more likely to act it out. It’s better for everyone if you accept a picture of yourself having a malevolent side.” – David Schnarch

There’s nothing stranger than when it comes to someone else’s belief and/or religion and it’s amazing to me how when we look at Islamic Fundamentalism and the terrorism that arises, we don’t see the concretization of the imagination and beliefs in our own willingness to assign blame. We’re all pretty certain that their religion is to blame and yet unwilling to entertain that suicide bombers are possessed by the devil.

Can we find a balance between individual accountability and cold certainty of reason, and the warm hot embrace of faith and the imagination? Spiritually, that’s a razor’s edge to walk, but one that allows for compassion and action. There’s a thin line that separates faith from superstition. It takes a degree of spiritual sophistication to know the difference.

“The Witch” gets an A- overall.

A+ for historical accuracy.
A- for risk taking and trying something different.
B+ for a willingness to portray witches as anything but martyred feminist saints. (Maybe people did practice dark magic.) And for a willingness to portray early Christianity as unhinged. That if you believe in things like “the evil eye” then you’re going to live in interesting times cause who among us isn’t without sin… Accusations will fly and neighbors will be blamed (and sometimes beheaded) when things go south.
B+ for the meta… Our current zeitgeist is one of ancient belief in juxtaposition with secular materialism. (Secular Paris meets jihadist suicide bombers.) That thin line that separates faith from superstition. From the belief in witches and the devil to belief in God.