We live in a Comic-Con age where grown men and women dress up, AKA cosplay, at packed gatherings each year.

For writer Faith Moore, that means indulging in her passion for Disney princesses. Only some cultural scolds insist they aren’t as woke as they should be for modern times.

Poppycock, says Moore. So she wrote “Saving Cinderella: What Feminists Get Wrong About Disney Princesses And How To Set It Right

” to both defend her beloved princesses and set the record straight. HiT reached out to learn more about the book and why we need it in the first place.

HiT: When did the fascination with Disney princesses begin, and how has it evolved over time?

FAITH MOORE: I had the great good fortune to grow up during Disney’s Renaissance, which began in 1989 with “The Little Mermaid” and ended (by my reckoning) with “The Lion King” in 1994.

I remember going to see “The Little Mermaid” on a rainy day in November when I was almost seven years old. This experience led to many hours immobilized on my floor, a bed sheet tied around my legs, 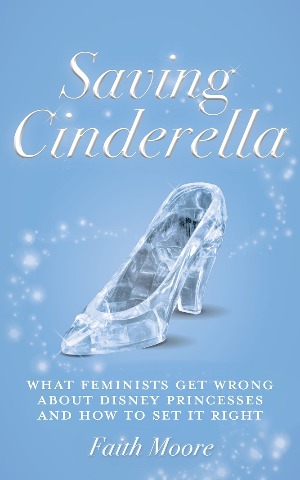 But it was “Beauty and the Beast,” which came out two years later, that really changed my life.

Something about that story grabbed onto my heart and hasn’t let go. I saw the film seven times in the theater and countless more at home (I currently own two DVD copies). The interplay between the man whose baser instincts have run so amok that he literally becomes a beast, and the woman who is so truly herself that she inspires him to channel those instincts has fascinated me ever since.

At first, Disney princesses were my role models and my guides — offering a picture of how to be brave, and true and loving. As I grew up, I came to see these movies as an important, and often misunderstood, contribution to the American canon and set out to try to rehabilitate them in the eyes of viewers.

HiT: At what point did the culture turn from adoring these characters to saying they weren’t feminist enough for modern times? Any particular authors leading this charge?

At first, this simply translated into more fully realized, less symbolic, heroines — like Ariel, Belle, and Jasmine — and critics and viewers applauded the shift.

But, as second wave feminism shifted into third, the same critics who had called Ariel “feisty” and Belle “independent” began to backtrack. Now Ariel was maligned for “giving up her voice for a man” and Belle was accused of “bestiality” and diagnosed with Stockholm Syndrome. Add that to the misguided notion that the earlier princesses were passive damsels in distress, and the tide had definitively turned against the princesses.

HiT: “Saving Cinderella” seems like the most natural book project for you … what were your fears going into it, and how did the writing process impact your views on pop culture?

MOORE: My initial fear, I think, was that no one would take me seriously if I tried to write a book of literary criticism on Disney princess movies. I worried that people would think the subject wasn’t “serious” enough to warrant such a deep dive.

And I wondered, also, if I had the chops to write a book-length work of nonfiction. I’m the kid who never finished her reading assignments in school because it took me so long to figure out what anyone was talking about most of the time.

But the more I wrote and thought and researched about Disney princesses and their place in pop culture, the more I realized how beloved they were, even as they were being maligned by the modern media. And that made me feel fairly certain that there would be at least some kind of audience for the book.

HiT: Which of the recent Disney princesses have you found the most disappointing … and why?

MOORE: I absolutely hate Merida, from “Brave.” The Disney princess narrative is meant to be about growing up — breaking away from your family in order to follow your dreams — but the “happy ending” for Merida is that she gets to stay home with her parents indefinitely (yay?).

The men in the film are universally portrayed as infantile and emasculated, such that Merida ends up with no love-interest at all. And this is played up as a big “feminist” win. It’s a total corruption of the message of fairy tales, which symbolically represent a girl’s transition to womanhood through her separation from a mother figure, and her coupling with a man of worth.

HiT: Why do feminists weaponize Disney Princesses in the first place? What’s the larger goal?

MOORE: No matter what feminists do, they can’t stop little girls from loving Disney princesses — or princesses in general. It baffles them. They can’t understand why, in the modern age, girls would still want to dress in pretty dresses, go to the ball, and marry the prince.

To them it’s evidence of the insidious hold the patriarchy still has over society. The feminist idea is: if little girls insist on loving Disney princesses, then we’ll just change Disney princesses to match our ideology.

Weaponize is the right word — feminists are trying to co-opt something little girls already love for their own agenda.

But it doesn’t work that way.

Little girls are responding to the inherent symbolism of fairy tale princesses, which teaches them about integrity, compassion, following their dreams and being their truest self (I discuss fairy tale symbolism in much more detail in the book). Adding ideology moves princesses out of the universal — accessible to all, no matter your dreams — and into the specific — valid only for people who subscribe to the ideals of “feminism.”

HiT: Do you see yourself writing more books like “Saving Cinderella?” Or do you have other book projects in mind?

MOORE: I never thought I’d be the author of a work of nonfiction. I’d always wanted to be a novelist. But I found that there was something I had to say about Disney princesses, and that I needed the length of a book to say it in.

“Saving Cinderella” is what I’ve been trying to say — in all my articles, blog posts, tweets, and dinner table tirades (sorry about that, family) — and now I’ve said it.

It’s not that I’m going to stop talking about Disney princesses (don’t worry!), it’s just that this is what I’ve been trying to say all along. I do have other book projects in mind (and on paper, actually) but I’m not ready to share them yet. Suffice it to say, if you like “Saving Cinderella: What Feminists Get Wrong About Disney Princesses And How To Set It Right