The R-rated animated comedy brings the food we find at the corner grocery to life. That gives star/co-creator Seth Rogen all the slack he needs for 90 minutes of bad hot dog puns, crass gags and a food sex finale.

That last bit is a wee spoiler, but audiences should mentally steel themselves for the movie’s waning moments. You’ll thank me later.

In between, the comedy savages religion, mocking those daffy enough to believe in a higher power.

“Sausage Party” will streak to cult status in record time all the same. It’s a blisteringly clever tale unlike anything we’ve seen before.

Rogen voices Frank, a hot dog awaiting his ticket to the Great Beyond. He’s stuffed into a package with other hot dogs on a grocery store shelf. They pass the time cracking wise and flirting with the pretty hot dog buns placed right next to them.

“Red, white and blue day” is coming soon, and the hot dogs sense a “god” will come into the store any minute. That means a shopping cart ride to the Great Beyond at long last.

Only not every food product believes in that path. Some know the truth, and Frank and co. are in for a very rude awakening.

Chaos ensues. Friends are separated. Hard lessons are learned. And, at every possible moment, organized religion is hit with the comic equivalent of a sack full of oranges.

“Sausage Party” could be the coarsest product to roll of a major studio’s assembly line in ages. Loaded with profanity, sexual references and drug use, it rubs its prurient qualities in our faces.

No joke is off limits. There’s even a reference to 9/11, a bit as audacious as it is tasteless.

The film’s villain is a douche product (Nick Kroll) who struts around like a bully in an ’80s movie.

Two characters, meant to represent Arabs and Jews, offer the most direct connection to modern religion. The Jewish bagel (Edward Norton) is like a poor man’s Woody Allen, luxuriating in every Jewish stereotype possible. His counterpart, Lavash (David Krumholtz), offers a similar slap to Muslims.

The film also embraces gay sex in an exhaustive fashion. It’s not merely asking us to accept gay lifestyles, a perfectly reasonable stance. No, the movie suggests everyone would engage in gay sex if not for those darned religious rules stopping us. Never mind what human biology says about our sexual appetites.

For a presumably enlightened comedy it can be rather dumb at times.

Gum, Frank, Brenda and the rest of the cast of #SausageParty are in @VanityFair! pic.twitter.com/QcR4DRt460

The incessant swearing eventually wears out its welcome. The story’s ingenious streak lasts longer. The screenplay pelts us with jokes, a barrage that covers every style of humor. Silly. Corny. Crass. NSFW.

Most jokes fall in the latter category.

The animation is surprisingly sharp, certainly on part with the average, family-friendly romp. Our “heroes” could be deposited into any Pixar-style movie, and no one would blink.

Until they opened their mouths, that is.

The film’s tone isn’t so consistent. A subplot involving a severed head comes out of nowhere and doesn’t plug into the free-spirited nature of the story. And the more the film pushes its outrageous themes, the looser the grip on storytelling essentials.

HiT or Miss? Those eager for original storytelling laced with anti-religious talking points will cheer “Sausage Party.” Everyone else should proceed with extreme caution.

How do you get to Carnegie Hall? Buy off everyone in a 50 square foot mile, for starters.

“Florence Foster Jenkins” tells the tale of a terrible singer who won over the masses despite her pitiful pipes. How did she do it? With smoke, mirrors and a husband willing to do everything humanly possible to support his wife’s muse.

It’s almost too outlandish to be true. Yet it is, with the usual Hollywood embellishments. If only the story wasn’t so satisfied with the surface of Jenkins’ bittersweet victories.

Meryl Streep is almost too perfectly cast as Jenkins, an heiress who lives to cut checks for the arts. She’s also a wannabe singer, yet her voice is so off-key she couldn’t make the first round of “American Idol.”

Her husband, St. Clair Bayfield (Hugh Grant), can fix that. He spends his days bribing music critics to heap praise on her. He also makes sure every singing gig she gets is filled with ringers, saps who can’t stop applauding her absurd vocal choices.

That’s love. Or is it something more sinister from her dutiful beau? 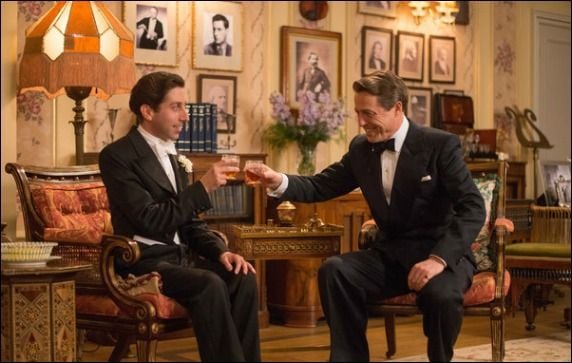 “Florence Foster Jenkins” teases the answers to the latter question. It’s far more interested in reaction shots to the star’s lousy singing. They are … precious, a running gag that doesn’t lose oxygen until the third act.

It’s equally funny to see Streep, a marvelous singer, bending perfectly good notes until they snap in two. Or three.

Naturally, she brings warmth and humanity to her otherwise flawed character. Florence has a kind heart, albeit one insulated by wealth.

She isn’t the only one capable of owning entire scenes.

Simon Helberg (“The Big Bang Theory”) shines as her skeptical pianist. At first, he can’t believe he’s getting a fat paycheck to perform while she decimates one classic song after the other. Soon, he comes to be charmed by Florence and her indefatigable approach.

The story’s dramatic through line remains wafer thin, despite the consistent mirth. Why is St. Clair seeing someone else on the side? Is their marriage a charade?

The film’s opening scenes find St. Clair putting an exhausted Florence to bed. It’s an act performed with such tenderness it’ll break your heart. We next see him kissing a younger woman (Rebecca Ferguson, wasted), and not in a chummy fashion.

The film’s core relationship is complicated. So why not invest more time teasing it out? When did this arrangement develop? Is she truly in the dark? What led to him straying so consistently?

The focus is on farce, and on that level director Stephen Frears (“Philomena”) never wavers. The story may be set in the States, but the droll delivery bespeaks a thoroughly British wit.

“Florence Foster Jenkins” suggests the star’s patriotism, given the World War II setting. And a few moments reveal her thoughts on class structure that thoroughly surprises.

Streep brings nuance to brightly colored caricature, but Grant delivers the more nuanced performance. He’s a cad, a playboy and a man deeply invested in his relationship. The actor drops some of his more notorious tics, revealing a delicacy that’s been missing from his past roles.

Streep is the main attraction here, but audiences will come away marveling at Grant in equal measure.

HiT or Miss: Consider “Florence Foster Jenkins” the bridge between mindless summer blockbusters and the Oscar-bait films to come.