There is a unifying quality to all of writer/director Mike Judge’s work – his ability to find humanity in a dehumanizing environment.

It may seem odd but there is a recognizing of the human soul, struggling to break free from the crippling sameness of a sterile and controlled environment, that defines his best work. That includes “Beavis and Butthead,” the eternally underrated “Extract” and especially “Office Space,” now 20 years old and undiminished in its potency. 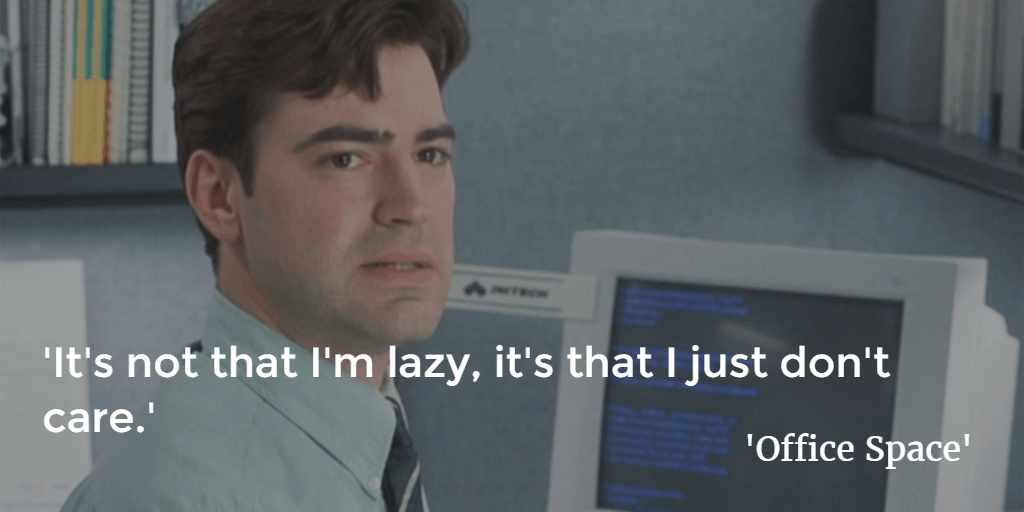 “Office Space’s” staying power goes far beyond its recognizing the daily absurdities inherit within white collar jobs. Anyone can attest to the maddening insistence of office suits lecturing on the importance to TPS report cover sheets and the importance of “Aloha Shirt Day.”

There’s also the irritation of an occupation in which multiple bosses make accountability (just who is in charge here?) a vague, floating question.

Other works that came before (namely Charlie Chaplin’s “Modern Times” and Billy Wilder’s “The Apartment”) and after (both the U.K. and U.S. iterations of “The Office”) Judge’s film can vouch for the slowly dying state of being a company cog. What makes “Office Space” not only timely but undeniably profound can be traced to its creator.

For the uninitiated (clearly, you didn’t get the memo), Ron Livingston stars as Peter Gibbons, a worker at the Initech company who, when we first meet him, is numb and depressed by the banalities of his job.

His co-workers and office buddies, Samir (Ajay Nadu) and Michael Bolton (David Herman), share his daily frustrations. Weeks go by without any certainty of a direction or future. Their boss, Bill Lumbergh (Gary Cole), not only inundates them with flavorless requests but keeps them working on weekends.

After undergoing a sketchy bout of hypnosis, Peter emerges from his hypnotic state in a blissful, Zen-like state of detachment. He’s suddenly not bothered by much of anything, speaks his mind openly (minus any filter) and clearly notes the effect Initech, and work in general, has on him. His newfound mentality initially horrifies those around him, until Peter’s way of thinking inspires a complex and highly illegal act of defiance against Initech.

The absence of online dominance and a few brief mentions of then-pending Y2K truly date the 1999 cult film. Otherwise, Judge recognizes the faces and voices of this world with total clarity.

It’s why “Office Space” is still funny and painfully true.

Judge’s funny but discomforting 1991 “Office Space” MTV animated short, focusing on the struggles of the sort of endearing but very strange office mainstay Milton, is the film’s basis. The 1999 live action adaptation also owes a great deal to Herman Mellville’s “Bartleby the Scrivener: A Story of Wall Street,” in which the oddball protagonist declares to his boss and colleagues, “I’d prefer not to.”

Bartleby was clearly the Peter Gibbons of 1853.

Outside of Initech are the bland, interchangeable Chotchkies, Flingers and (the one real company) Chilli’s, all adding to the sense of an environment of brainless converts. Judge not only gets the specificity of these absurd jobs (like Peter’s eight bosses or the necessary “15 pieces of flair”) but even the stupid, meaningless names within the work circle (in addition to Initech, there’s also Renetrode and Initrode, which is incorrectly referred to as Intertrode at one point…I think).

The “villains” of “Office Space” (namely Lumbergh, the “Oh Face” colleague and that brat working at Chotckies) are all converts to their corporation. Peter is (literally, at one point) pushing against the confines of the cubicle, until it falls forward and unveils a long-obscured outside view.

Judge’s brilliance is all in the details, like Lumbergh’s hilariously solemn office birthday party and someone noting that “Superman III” is an “underrated” movie.

A remarkably versatile group of actors assuming characters who soar above mere caricature is the film’s greatest special effect. The brilliance of Cole’s oddball Lumbergh is his weird cadence, which sounds like a record slowing down.

There’s also (to name a few) Livingston’s commitment to Peter’s wacked sense of euphoria, Stephen Root’s method-y take on the inscrutable Milton, Herman’s slow burn as not that Michael Bolton and Diedrich Bader’s impossible to pin down but utterly recognizable neighbor.

John C. McGinley and Paul Wilson are terrific as “The Bob’s,” the two-headed Initech monster who plagues the outfit. Then there’s Jennifer Aniston’s jewel of a performance – she turns the girlfriend role into a unique and offbeat sprite, her best outside of her dramatic vehicles.

Working with specific idioms (and the idiots who speak them), as well as a lived in understanding of specific corporate America denizens, Judge’s screenplay evokes a you-are-there grasp of the environment and why its cracked. The problem is less about Initech than those who make Initech’s faceless, soulless mission their personal gospel.

As a comedy, the laugh ratio is atypically high and consistent. The one-on-one encounters always hit pay dirt. There’s also the use of rap music, cleverly expressing the inner rage brewing within Peter, Michael Bolton and Samir. Judge manages to make the third act heist sequence minimalist but nail biting, milking suspense from the downloading of a computer file (still an omnipresent, though very-’90s, movie trope).

The great cinematography by Tim Stuhrstedt (who also shot “Bill and Ted’s Excellent Adventure”) keeps the actors framed just off-center and avoids any kind of Kubrickian symmetry. The famous, slow motion beating of a copy machine is sheer poetry.

Judge’s 2010 “Extract” is a fine companion piece to “Office Space.” The Jason Bateman-starring, factory worker ensemble comedy is, like its predecessor, fueled by character idiosyncrasies. On the other hand, while Judge’s second film, “Idiocracy,” has a cult following nearly as rabid as “Office Space,” it sits outside of his workplace comedies.

“Idiocracy,” about an average man from the early 20th century who awakens hundreds of years in the future in a world full of morons, is often hilarious but spotty and truncated. The troubled journey “Idiocracy” experienced in theaters (its release was even more disastrous than that of “Office Space” and by the same studio, too!) led to the sobering realization years later that the film’s high concept plot and raunchy sight gags appear to be prophetic.

Yet, “Idiocracy” works best in moments and not as a whole. While “Office Space” may end defining Judge’s body of work, it’s not flawless, either.

Admittedly, the hypnosis subplot of “Office Space” has never worked or made any kind of sense. The rationale behind Peter’s conversion is weak and the movie actually forgets about it at the mid-point.

Oddly, this came out the same year as the Kevin Bacon thriller, “Stir of Echoes,” which cleverly utilized the concept of hypnosis, but I digress. Peter’s initial girlfriend, Anne (thanklessly played by Alexandra Wentworth) is a nothing character. There’s also a dumb dream sequence late in the film, set in a courtroom, that shouldn’t have made the final cut.

On the other hand, the dream aspect could have given the hypnosis subplot a Get Out of Jail Free card: Peter’s initial dream leads to the “is This Good For the Company?” lecture. What follows is the build up and payoff of Peter’s altered state of mind.

Is this all still part of Peter’s dream?

It would justify the sketchy hypnosis angle. However, this idea is thwarted by yet another dream sequence, but it’s the one that works – Peter awakens from one of cinema’s funnier sex dreams, in which a flowing curtain and a coffee cup are present.

I saw “Office Space” on opening weekend with Sarah, my college buddy. There were seven people in the theater. Although the two of us laughed like jackals, no one around us seemed to find it as funny, as our guffawing echoed loudly throughout the cavernous Denver theater. The film made my year’s end list of Underrated Sleepers in my college paper summation of The Movies of 1999.

A few years later, the cult following kicked in, though I was unable to celebrate it. While my wife was a proud owner of a red Swingline stapler and still has her official Initech coffee mug, I was working at a publishing house, experiencing daily bouts of Peter Gibbons-like frustrations.

Today, the movie still cracks me up though, I’ve had more than a few managers who are uncannily Lumbergh-ian. Judge’s movie can sober up any career optimism, and it’s as it should be. We need to all be on the lookout for any white collared stooge insisting on the question, “Is It Good For The Company?”