For starters, you won’t see the subtitle “Sorority Rising” on the cover. Secondly, the female stars of the movie are relegated to the backdrop. 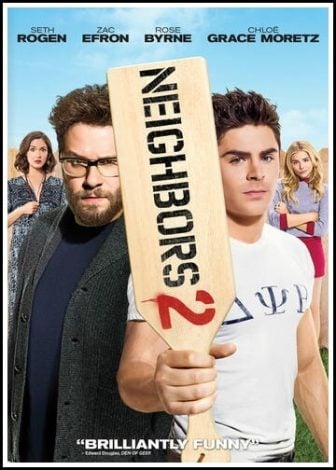 It’s all about Seth Rogen and Zac Efron, the chubby lead and the buff frenemy from the comedy franchise.

What about Rose Byrne? Chloe Grace Moretz? The sisters who party hard in the film’s trailer?

You have to squint to see them.

It’s the kind of marketing twist that often sparks SJW outrage. And it’s all the more interesting given the film in question.

We still have a few months left in 2016. Still, “Neighbors 2” could end up being the year’s most politically correct film.

The sequel’s creative team jammed as many PC flourishes as possible into the finished product.

A gay engagement and wedding. Shout outs to Hillary Clinton. A nod to alleged police brutality against blacks.

The director, Nicholas Stoller, went so far as to hire a pair of female writers to oversee the production. Why? To make sure it wasn’t offensive to women, apparently.

The comedy itself proved a box office bust, making a fraction of what the original film hauled in. Creatively, the sequel is similarly weak. That’s probably why the studio changed up the marketing approach.

That “Sorority” is no longer “Rising.”

Will outrage ensue? It’s quite likely.

Remember late last month when a simple “Ghostbusters” T-shirt sparked a fury? Old Navy took the brunt of that SJW assault by featuring girls shirts with the slogan “Ghostbuster in Training.”

The boy shirts, gasp, lacked that phrase. For anyone paying attention, the new “Ghostbusters” film featured an all-female Ghostbusters gaggle.

All it might take is a well-connected liberal web site to lodge an informal complaint, and the team behind “Neighbors 2” might have to do fancy PR footwork.