Films like “The Purge: Election Year” and “The Shallows” have dominated box office charts, outpacing many summer blockbusters. “Don’t Breathe” and “The Conjuring 2” have added critical acclaim from to their treasure chests.

One of the better horror movies of the year, director Marcus Dunstan’s “The Neighbor,” received a more quiet release than its fright-filled counterparts. It’s still another successful notch in the genre’s belt.

Dunstan began his career as one of the winners on the Matt Damon/Ben Affleck produced docu-series “Project Greenlight.” He co-wrote with writing partner Patrick Melton the script for “Feast,” the horror script chosen as the winning story for season three of the series.

Director John Gulager, whom Dunstan says he remains friends with, got to work on putting together the future cult classic. The original “Feast” created a modest horror franchise. The film’s two sequels were directed by Gulager and written by the Melton/Dunstan team.

Dunstan says before “Project Greenlight,” he was “working at Blockbuster home video restocking ‘Project Greenlight’ season one.” Awareness of the series came when someone visited him at the shop asked him to hand out free passes for a nearby screening of “The Battle of Shaker Heights,” season two’s winning film.

“Opportunity is this close, and it might as well be to the moon and back,” says Dunstan, remembering the days of a young, dreaming writer.

FAST FACT: “Project Greenlight” returned to HBO, the channel which first began running the series in 2001, last year. HBO didn’t pick up the show beyond that one new season. Co-creators Affleck and Damon vowed to shop it elsewhere following the cancellation.

When season three welcomed more genre-friendly writing, Melton and Dunstan submitted their “Feast” script. The rest, as they say, is history.

The horror writing duo went on to become the go to scribes for the “Saw” franchise- writing part four through “The Final Chapter.”

Dunstan reveals they sold “The Neighbor” script to Dimension at a party for “Feast.” The project languished in development hell for a long time before this year’s modest release.

Not So Funny Business

“The Neighbor” casts comedian Bill Engvall opposite Dunstan/Melton regular Josh Stewart. Stewart, who proved his leading man chops with “The Collector” films, was an obvious choice for the military veteran wary of his neighbor. The “Blue Collar” comedy veteran wasn’t such a clear fit for the film’s creepy antagonist.

Dunstan says it didn’t take much to convince him Engvall had a spooky baddie somewhere inside of him. He says Engvall’s comedy history actually helped the duality of the character, an “affable, genial” man with “a menacing, rattlesnake soul.”

“He charms you in real close and then strikes,” he says.

Engvall transformed himself for the character, all the way down to his posture.

“People who knew him needed a double or triple take,” he says.

Inspiration for the casting came partly from a memorable chapter in “Miami Vice” history. The episode in question gave Bruce Willis arguably his most unlikable role to date. Dunstan describes being “horrified” by Willis, an actor best known at the time for his comedic chops on “Moonlighting.”

The other star of “The Neighbor,” Stewart, was well acquainted with the writing of Dunstan and Melton. “Josh was involved in catering the character to him,” says Dunstan. He made the role “more authentic to his personality.” Stewart captures the quiet and depth of a veteran.

“In those moments of quiet, he keeps acting,” says Dunstan, “you’re so fortunate to build a team with no need to recruit other players.” 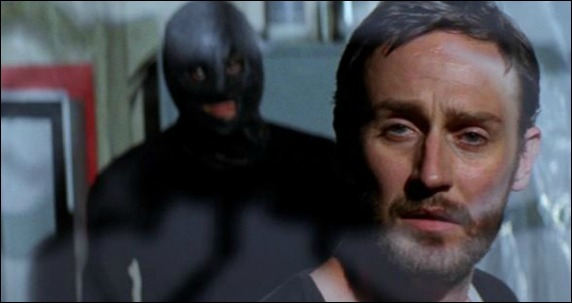 Dunstan says the set was like family and a fun adventure, so much so that laughter needed to be edited out of the movie and sometimes threatened important shots.

The director’s time on the “Saw” franchise taught him and Melton the importance of having a well-oiled machine manned by reliable people. He describes the horror franchise as boasting “a built-in family structure.” The films were made on budget and on schedule because “there weren’t too many new elements from film to film” and you “could count on a few factors being there.”

The successful franchise, which had a large mythology built by Dunstan and Melton, is now being rebooted with “Saw: Legacy,” set for release next year from the Spierig Brothers. Dunstan, a positive man by any artist’s standards, says “‘Saw’ was something so unique.” He says the franchise has “a flatbed of fertile soil.”

“I’m excited,” he reveals about the new film, “Horror such as that should always be a part of the conversation,” he says.

“Saw” isn’t the only franchise Dunstan has dipped his toes in. Dunstan and Melton were set to spearhead the “Halloween” franchise before a rights dispute landed the new movie with Blumhouse Productions and original creator John Carpenter.

Dunstan said his crew made it as far as “motion tests” before the “Halloween” ship sailed. He said he and Melton were, “striving to achieve the memory of the original.” He says the film “went home” and, as a horror fan, he couldn’t be more excited.

“Every step of this journey has got to be a learning process or you get stuck in a rut,” he says, describing his excitement for Carpenter’s take on the material as “event level.”

He and Melton are now working on a project with “Jurassic World” director Colin Trevorrow called “Metronome” that “couldn’t be more different from what we’ve done before.”

Dunstan says his surreal journey in Hollywood has taught him there’s “a reward and challenge to keep punching. Just keep moving forward.”

That aforementioned rights dispute over “Halloween” happened on a Thursday. “The Neighbor” got greenlit the following Monday.

“The best way to get over not making a movie is to make another movie.” Dunstan says.