By “acting,” I’m not referring to his role in “Sharknado 3” or some movie called “Bait Shop” where he shared the screen with Billy Ray Cyrus.

Sorry, IMDB and I are getting a little off the rails here.

What I mean is: did you know Engvall could really act? In fact, he’s the highlight of the surprisingly effective horror-thriller, “The Neighbor

In what seems to be gimmick casting, Engvall shines as Troy, a man up to no good and the seemingly only neighbor of John and Rosie (Josh Stewart and Alex Essoe). The couple has some secrets of their own. John, a combat veteran, is helping to move drugs for his uncle until he can save up enough to run away to the beach with his lady on his arm.

As John runs around for his uncle during the day, Rosie spends her time doing what many do, but would never admit to – spy on her neighbor. He’s an odd duck, no doubt. When he visits John and Rosie’s house he questions whether they’ve been on his land.

Troy also spends a little too much time eyeballing Rosie.

FAST FACT: All of Bill Engvall’s comedy albums have debuted at no. 1 on the Billboard Comedy Charts.

Engvall takes full advantage of these quiet moments. It’s when he’s at his best.

At a slim one hour and 20 minutes, one of the film’s flaws is robbing Engvall of more of these sequences. When he speaks, we listen, engrossed by his quiet, yet frightening demeanor. He’s likable and dangerous, all at the same time.

“Neighbor” moves quickly. It wants to get to the horror and noise rather than spend too much time building tension. While that would seem a foolish move on the script’s part, it actually leads to a quick and harsh horror-thriller, far more effective than many of its counterparts.

When it’s revealed what Troy is up to at his house and the dominoes start falling, there’s still plenty of movie to go. Director Marcus Dunstan (who co-wrote the screenplay with Patrick Melton) squeezes everything he can out of these moments.

[Creepy Deep Voice] Hello there, The Neighbor just came out on DVD, iTunes and On-Demand…what are you going to do about it!? I think you should trap yourself at home and watch it….TONIGHT…or else!. [Normal Voice] Seriously, grab my new movie and let me know what you think….or else😉 . . . #darkersideofbill #theneighbor #billengvall #scarymovie #outnow #thriller 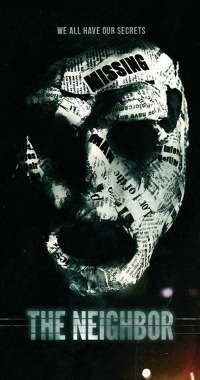 “Neighbor” shouldn’t work. It’s a VOD horror film with a Blue Collar comic as its villain. Melton and Dunstan have a truly surprising movie on their hands all the same.

Stewart is a magnetic headliner pulling off an authentic feeling military man, and Engvall is just damn surprising. Never once did I think of his Blue Collar Comedy days. The man disappears here, creating a great villain that is fleshed out enough that when the credits roll, we want plenty more.

The script for “Neighbor” is tight, but has plenty of meat on its bones along with a few nice surprises. The female characters get much more to do than just be damsels in distress.

And Dunstan pulls off some slick moves, switching from the feel of an old home movie to fast-moving digital. He keeps everything steady so we always know what’s happening.

Films like “The Neighbor,” which received little to no press, are the sort of welcome surprises that are becoming more and more rare.