We meet Samantha as she’s dressed as Mrs. Claus in her town’s Christmas parade and witness what an all-around sweetheart and well-liked person she is. Samantha is amnesia-stricken, as she can’t remember the past eight years of her life. Nevertheless, Samantha is happy, has a nice husband, a beautiful little girl and appears content with her life…which is nothing like her prior existence.

A low rent detective named Mitch Henessey (Samuel L. Jackson) has broken her longstanding case. Meanwhile, a series of coincidences lead some very bad people to Samantha’s home and the truth comes out.

The violence of the car crash that sets the film in motion (complete with Davis doused in blood and a wounded deer graphically put out of its misery) comes with a jolt. Even more memorable is the initially goofy follow up scene, in which the giddy Samantha stirs a memory cap by chopping veggies in the kitchen.

The actors and music score make us feel like we’re watching a family film, until it comes to the darkly funny punchline.

Later, we see Charlene is reawakened from within Samantha when she returns to the line, “Chefs do that,” only this time it isn’t cute.

The set up isn’t mawkish but feels like a genuinely sweet romantic comedy. The whole thing is so prickly overall, it earns the small but needed moments of sentiment.

Shane Black is the film’s screenwriter and, make no mistake, this could only have come from him. Signature Black touches include the neo-noir approach, mixed with wild action, noir-esque narration, the Christmas setting as a contrast to the chaos and a cute kid at the center of the story.

There are also references to Robert Altman’s celebrated neo-noir “The Long Goodbye” (1973), the narratives of Raymond Chandler, and a few good potshots taken at “Baywatch Nights” and New Jersey in general.

As always, Black’s prose is un-PC, his story pulpy and nasty. This fits into an unintentional trilogy with Black’s best – “The Last Boy Scout” (1991) and “Kiss Kiss Bang Bang” (2005). “The Long Kiss Goodnight” is what a big budget Remo Williams or Frank Castle movie should be.

Harlin never shies away from the harshness of the genre – in fact, this was rougher than any of the Brosnan era-007 thrillers. The violence is vicious and shocking, even right from the start, where the jarring car crash unlocks some of the secrets and aggression stored within Samantha.

Made during the Michael De Luca era of New Line Cinema, when notorious wonders like “Magnolia,” “The Island of Dr. Moreau” and this were all in production, Harlin’s film seems gritty and uncompromising in a way that makes it stand apart from most other action movies of its decade.

For all the intricately staged stunts and special effects, the best thing the movie has onscreen are its stars, who are phenomenal in this.

Davis and Jackson take knowingly pulpy characters and invest heart, unflattering nuances and real pathos into their roles. Davis goes all out, is a credible with all the demanding stunt work and manages to be both endearing and scary in her dual roles.

This is a redemption story for both Samantha and Mitch.

In Davis and Jackson’s hands, it’s also beyond badass. Here, Black even manages to comment on potential racial stereotyping (even Samantha and Mitch note this) without succumbing to it. 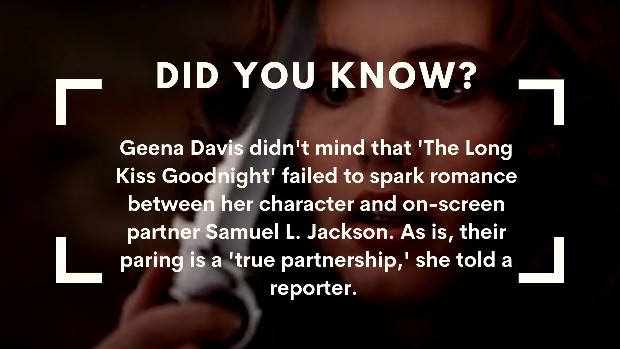 As the main villain, the underrated Craig Bierko (whose film career stalled after this and “The Thirteenth Floor” tanked) is very funny playing a sicko, whose sadism and general irritation with everything is always right on the surface.

The villains are motivated by “budget cuts” (the same nefarious reason Norman Bates is let loose at the beginning of “Psycho II”). Brian Cox, pre-Treadstone, is welcome spouting exposition while he drives the leads around. While the villains all display variations of misogyny, the movie itself never does.

The dialogue is hilarious, especially Jackson’s; his final line, which I won’t repeat here, is a howler. It’s no wonder that this is the role the actor has repeatedly stated in interviews is his all-time favorite. Having Muddy Waters’ “Mannish Boy” as Mitch’s theme is another touch with a big payoff.

At the time of the film’s release, Harlin and Davis were a Hollywood power couple the press went after. Why? The monster flop of the Harlin-directed/ Davis starring “Cutthroat Island” the year before (which has held up wonderfully over time).

The media also targeted Black and the at-the-time astronomical fee he was being paid for his screenplay, a reported $3 million for “The Long Kiss Goodnight” (as well as $1.75 million for “The Last Boy Scout”).

Apparently, no one minds when movie stars get paid a fortune for their work but writers, for some reason, are deemed unworthy of such wealth.

Davis and Harlin were treated condescendingly by the press after the underestimated “Cutthroat Island” bottomed out in such spectacular fashion and subsequently went after this movie. The reviews were mostly hostile at the time, with many taking a “fool me once” attitudes towards another Harlin/Davis collaboration (it would actually be their third, as Harlin produced the Davis/ Michael Keaton comedy, “Speechless”).

Harlin’s body of work has dipped into C-level B-movies (unlike the A+ popcorn movies he made at the height of his powers), but he deserves greater recognition as a craftsman of superb action movies. “The Long Kiss Goodnight” is his best film but “Cliffhanger” and “Die Hard 2” are both superb action movies.

The inclusion of Samantha’s daughter during the entire third act isn’t entirely necessary. The actors handle it well and it doesn’t turn maudlin, but it’s a dubious touch this already perfectly edgy film didn’t need. Black doesn’t always know what to do with this subplot of Charlene’s cruel streak harming Samantha’s daughter, as it sometimes offers dramatic weight but also is more psychological baggage than the film knows how to deal with.

The action is incredible, as Harlin is in his element and has the budget to pull of some jaw droppers, like the moment Samantha and Mitch escape a grenade by jumping out of a window and land in a frozen lake. Jackson’s third act “escape” is awesome, as is the blow-up-everything Canadian border grand finale.

There are, of course, a few noteworthy examples beforehand (everything from “The Perils of Pauline” to Ellen Ripley), though Davis and Harlin were ahead of their time by making Samantha both vulnerable and ferocious, both an independently minded woman and a mother trying to reclaim her maternal side.

In terms of the intensity and brutality (which isn’t always offset by the humor), this is much stronger than expected. Perhaps the closest model to “The Long Kiss Goodnight” is “La Femme Nikita” (1990), Luc Besson’s savage, extraordinary tale of a woman who is rewired into a warrior after her “former” life has led her to incarceration.

Davis’ Samantha Caine is a far more sympathetic character Anne Parillaud’s Nikita, if only because the latter was a brutal killer who became a sophisticated woman, whereas Caine is the opposite.

The level of the violence may have been a dealbreaker for some when this was released in the fall of 1996. Of all indignities, it was bested by “The First Wives Club.” I refuse to go back and endure another viewing of “The First Wives Club” but “The Long Kiss Goodnight” has generated an enthusiastic cult following since its release.

For Davis, Jackson and Harlin, this is a major career highlight. If you have the stomach for it, here is one of the all-time finest and funniest American action movies.