For years Hugh Jackman’s Wolverine had an A-Team problem.

Remember that ’80s TV “classic?” Our antiheroes would fire a dozen rounds at the bad guys but few actually got hurt. It was family-friendly action, so a trail of dead bodies was a definite no-no.

That applied to Jackman’s Wolverine. He’s been slashing away at the bad guys for nine films. Yet they rarely have the scars to prove it. 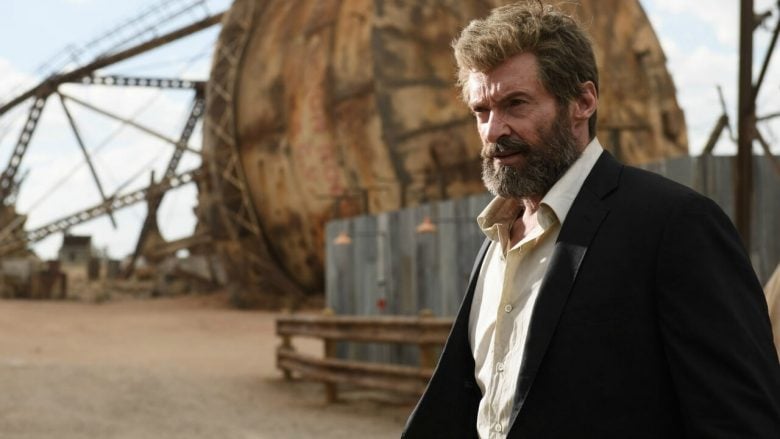 “Logan” is Jackman’s first foray into R-rated superheroes. And it takes a moment to register just how different the experience is. Of course, the mature rating does more than let Logan’s adamantium claws do their thing.

The language is much coarser, too. And the story line isn’t just bleak. It’s grimy, dark and full of despair. What a canvas for Wolverine’s (allegedly) last stand.

The action begins in the near future. The X-Men are nowhere in sight save Logan, looking older and far less powerful than we remember. He drives a limousine by day, saving up enough money to buy medicine for his oldest friend, Professor X (Patrick Stewart).

Where are their colleagues? Why is the great Wolverine struggling to take on a group of thugs as the story opens? And why won’t Logan’s skin stitch itself up like before?

In every way possible this isn’t your ordinary superhero film.

FAST FACT: Trainer David Kingsbury transformed Hugh Jackman into the jacked version of Logan we’ve seen in recent years. He had Jackman work on a lower number of reps to “encourage sarcoplasmic hypertrophy.”

The stakes, however, have never been more personal. Meet Laura (Dafne Keen), a young girl with claws as nasty as Wolverine’s.

She’s trying to reach a group of fellow young mutants. And Logan begrudgingly decides to help her find them. Professor X will tag along, but he’s hardly in any shape to help should trouble brew.

And brew it most righteously does, in the shape of a cyborg (Boyd Holbrook, solid but not menacing enough). He’s eager to abduct Laura for his own purposes.

“Logan” is the movie superhero fans have been waiting for, but it doesn’t uniformly deliver. Jackman and Stewart deliver near-perfect performances as characters they should know by heart at this point.

Boy, do they ever.

And young Keen is terrific, convincing as both a mute pre-teen and a budding warrior. Imagine telling her she can’t hang out with her friends ’til her schoolwork is done.

So why does the film drag in places? Director/co-screenwriter James Mangold nails the story’s grim sense of purpose. Yet some of the dialogue simply doesn’t dig deep enough into the main characters.

The action isn’t nonstop, although there’s a gritty nature to it that defies the superhero posturing seen in other films. Don’t expect a Stan Lee cameo or cutesy cameo by franchise regulars.

The fight sequences crackle thanks to the R-rating, but none is as memorable as the “X” series’ greatest hits. You will cringe in your seat all the same. Limbs hit the ground. Claws meet flesh. You see every inch of the damage.

RELATED: That Merc With a Mouth, Explained

At the risk of clutching some pearls, the language is unnecessary crude. Why would the big-screen Logan suddenly start cursing now? It feels like when HBO would automatically add nude scenes to its original slate of shows. Why? Because they could.

“Logan” still merits your attention, and it’s a fitting way to cap Jackman’s terrific tenure in the mutant game. You can thank “Deadpool” for allowing Marvel’s most conflicted X-Man to exit in a blaze of blood, guts and glory.

HiT or Miss: “Logan” delivers in ways you couldn’t expect given the previous superhero installments. What’s missing? The tiny details that could transform a solid effort into a classic.

She’s in love with one boy while another pines for her attention. Her girlfriends keep her social priorities in balance. And she’s feeling the pressure to lose her virginity and grow up … fast.

That’s when disaster strikes. But this story is only getting started.

“Before I Fall” lets Samantha live out what may be her final day over and again. It’s a standard teen drama wrapped in a fantastical gimmick. It’s a good one, though, enabling audiences to examine the choices we make during one seemingly average day.

An excellent Zoey Deutch is Samantha, the high schooler who keeps waking up to relive her final day on earth. She’s got a loving family, an adorable kid sister and a hunky beau.

Only this day won’t be as simple as she hopes. The teen party she hits with her gal pal packs more drama than anticipated. An old chum opens up to her in unexpected ways and there’s the matter of it being her last day on Earth.

It’s a Whitman’s Sampler of teen woes. The mean girls quartet (they always travel in fours, apparently) to the battle over who deserves to share her heart.

And, of course, there’s the school misfit, here dressed up like Cousin It from “The Addams Family.”

We’ve seen it all before, but some impressionable teens can’t say the same. For them, “Fall’s” central themes are both heart-warming and welcome. And, in case you miss them, they’re tacked up on a teen’s wall where they get multiple closeups.

There’s a hint of an edge to the PG-13 tale, a reality that young audiences will find appealing. The students here are sexually curious, aggressive in ways our culture cheers on but just as confused as their predecessors.

Deutch delivers a gently modulated performance, the kind that keeps the film’s surreal gambit afloat. And some sequences pack a sense of surprise, but not in the way the storytellers would applaud.

“I’m in hetero normative hell,” one lesbian student snarks, a funny line repeated to heighten the sense of deja vu. Another student is mocked for her “butch” appearance, which rings a bit false given how opens many students are today about alternative lifestyles.

Millennials are far more judgy about saying the wrong joke.

Samantha’s friends are goofy, sweet even, but they’re casually cruel in a way that should spark some parent-teen conversations. Or at least they should.

At times the screenplay rallies to Samantha’s side. And ours.

“Guys are all I have,” one girl confesses.

The story’s Pacific Northwest setting offers some welcome texture. So does the soundtrack, which could be revisited in a decade with the growing glow of nostalgia.

Can teens related to Samantha’s predicament? Certainly not the sci-fi angle. But what kind-hearted teen hasn’t struggled with doing the right thing over what will make those teenage years a snap?

HiT or Miss: “Before I Fall” is far from original in its teen angst landscape. Still, the narrative tweak is as clever as the film’s leading lady.