‘Deadpool’ lives up to its profane hype in its first four seconds.

The much ballyhooed superhero has been promising a hard-R-rated feature for some time. The movie dispenses with convention during the opening credits, a crush of potty words and name calling that sets a tone that never wavers. Not for a nanosecond.

His isn’t your father’s superhero. It’s your teen brother’s who stays up late chugging Jolt Cola and watching Skinemax.

Ryan Reynolds is Wade Wilson … again. Only this time his mouth isn’t sewn shut as it was during “X-Men Origins: Wolverine.” This Wade Wilson can’t stop talking, incinerating the fourth wall and driving the film’s villains batty.

It’s an origin story combined with a revenge tale. Wade’s days as a low-rent enforcer end with a terminal cancer diagnosis. He’s resigned to another chapter from the “Life Sucks” handbook, but after meeting the love of his life he suddenly wants to live.

So when a sketchy outfit promises they can cure him he reluctantly signs up. There’s a catch, of course. And said catch leaves Wade with super-healing powers and a heaping helping of anger.

And there’s a massive difference between bad dick jokes and good dick jokes. It’s like pornography. You know it when you see it. “Deadpool” is comic book pornography, meant exclusively for adults hungering for an anti-hero. 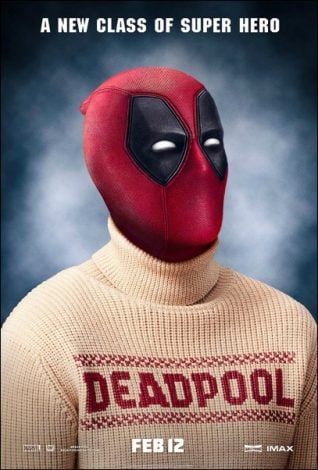 Most of the jokes land, and land hard. It’s almost dizzying how clever they are, or how adroitly delivered. Reynolds.may never play a conventional hero again. Maybe he shouldn’t. He’s so locked into this character it feels like his second skin.

It’s a chance to reboot his once promising career and exorcise the demons of his failed “Green Lantern” project.

There’s even a love story to make us care about the “Merc with a Mouth.” Morena Baccarin’s Vanessa captures Deadpool’s heart after some circus-like sex and a round of, “how screwed up was YOUR childhood?” It’s a sweeter relationship than anything Kate Hudson delivered in her poisonous rom-coms. 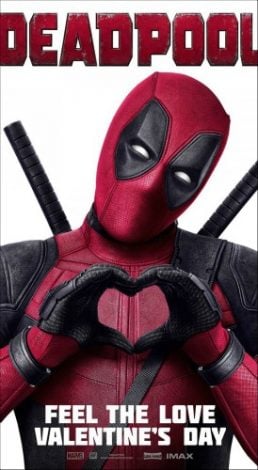 For all its hedonistic pleasures, “Deadpool” is far from perfect. The main character doesn’t look as monstrous as he says he does under that red mask. What, exactly, is this sinister organization that healed him all about, anyway? it’s never crystal clear, and the story bumps along so fast there’s little time for fleshing that out.

“Deadpool” shatters so many storytelling rules, and then falls back on the girlfriend in distress trope.

Ed Skrein is just fine, but nothing more, as Deadpool’s enemy. And former MMA fighter Gina Carano still struggles to convey emotions but packs a punch and a half as Skrein’s tag-team partner.

“Deadpool’s” pop culture gags and, oh no they didn’t antics may age poorly. It’s a movie of its moment, the time when we’ve had enough of those predictable, square-jawed heroes. For those nodding, “yes … yes,” better come in get it.