Premiums are soaring. Enrollment levels remain sluggish and well under projections. And those falsehoods!

“If you like your plan … you can keep your plan.”

Nonsense. Or, to be more accurate, lies.

Tell that to Jimmy Kimmel.

Kimmel’s Cruz chat was different. Cruz was a good sport all the same. And he happily steered the talk toward President Obama’s signature health care reform.

That’s when things got ugly … for Kimmel.

Senator Ted Cruz Discusses Not Being Liked By His Colleagues

Cruz vowed “to fight with every breath” Obamacare, which he dubbed a “disaster.”

“Is that really a disaster? Because I don’t really feel like it is … I’ve not heard one story from a person I know that indicated that. The word ‘disaster’ is a strong word to use,” Kimmel replied.

“Do you think these are the only people that I hang out with?” Kimmel responded testily, avoiding the argument in favor of his own Populist Card.

“I’ve spent the last several days campaigning in Wisconsin. Over and over again I had people come up to me and say, ‘My health insurance premiums went up. They doubled. They tripled. I’ve had to cancel my health insurance because I can’t afford it.’

He talked about regularly meeting with small business owners at informal round tables to learn what worries them most. 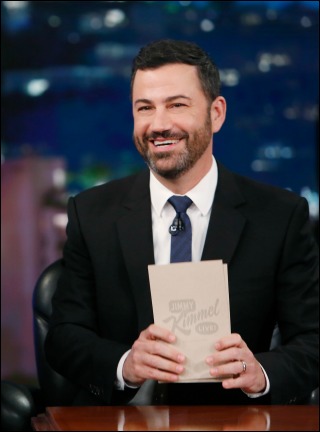 “I have never done one of those round tables where at least half of the small business owners didn’t list ObamaCare as the single business challenge they’re facing,” Cruz said.

“Maybe it’s the shape of the table?” Kimmel meekly answered, desperate to change the subject.

Because he had nothing.

Kimmel may have pretended he was an Average Joe, but when it came to cold, hard reality he proved to be a true bubble dweller.

His flimsy defense of ObamaCare amounted to a jokester’s bag of tricks. This Palace Guard was defenseless.

Kimmel didn’t treat Cruz like a late night show guest.He certainly didn’t rush to Cruz’s defense as he did Clinton. Instead, he went on the comic attack.

And he got served .. and exposed.