What Hollywood can conjure up with a gazillion or so ones and zeroes can leave us tongue tied. It’s still not enough. Without heart, humor and a story to nudge our souls even the brightest movie magic deserves the hook.

It’s why the live-action “Jungle Book” bullies past our cynical expectations.

Look, Disney is milking its beloved “The Jungle Book – Animated (1967)

” with those hummable songs and hep monkeys. You can’t blame the mega-studio. This time, we’ll use live actors and set up a franchise! Think of the merch! The sequels! The prequels!

The studio pitch practically writes itself.

Yet even in our mass produced age enough artists can push past the cynicism to deliver something … wonderful.  And director Jon Favreau and co. have done just that.

The classic story born from the imagination of Rudyard Kipling begins in less than inspiring fashion. We meet a young “man-cub” named Mowgli (the delightful Neel Sethi) who runs afoul of the meanest tiger in the jungle. Idris Elba follows up his terrific “Zootopia” voice work with an even better character in the intimidating Shere Khan.

Mowgli flees the tiger’s clutches with the help of pseudo panther parent Bagheera (Ben Kingsley). But they can’t escape Shere Khan’s wrath that easily. Which is why it’s important Mowgli runs into Baloo (Bill Murray), a kindly bear who needs help securing honey for his tum-tum.

“The Jungle Book” feels as forced as its pragmatic origins during the first act. Those early sequences flash some humor, but the situations are bleak and emotionally blunt. It feels like an action movie that could be too threatening for your kid brother or sister.

Once Baloo ambles into the frame everything changes. We get to know both the bouncy bear and his young human pal, and Favreau’s world brings us right along with them. 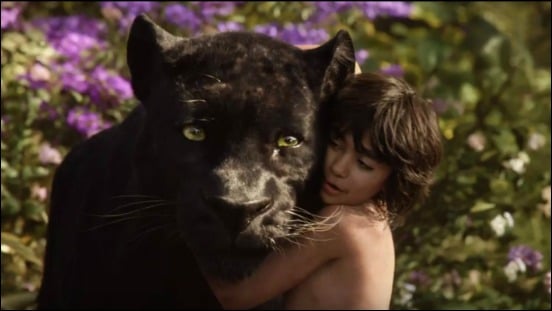 The animated beasts don’t look perfectly authentic, but it’s so close it’s impossible to quibble. Better yet, their movements are wildly convincing. There’s nary a scene, or even a gesture, that suggests its digital roots.

Murray and his co-conspirators do the rest.

You can practically see the comic legend’s expressions in the bear’s face, but it’s how he delivers his lines that makes him the film’s MVP. He’s sweet and soulful, and when he risks everything to fight for his new pal the emotions are palpable.

This is a computer bear we’re talking about. So why does he feel so darn real?

He’s not the only voice actor of consequence in “The Jungle Book.” Kingsley’s quiet grace powers past his character’s patriarchal cliches. Christopher Walken goes the full cowbell as a massive ape who stands in our heroes’ way.

It’s like Walken doing Walken, but with a clarity and sense of purpose that’s beguiling.

The story isn’t just a rollicking adventure that never succumbs to lazy gags or meta-moments. It’s about growing up, becoming a man and letting go of the past.

Parents might get misty eyed at times, and so could the young ones.

So let the sequels, prequels and re-imaginings commence. Just reassemble the same gang that made this “Jungle Book” such an unexpected delight and we’ll give each new chapter a chance.