Yes, comedy specials by Bill Burr and Dave Chappelle challenged the toxic status quo. The docudrama “No Safe Spaces” is doing the same in theaters across the country.

Still, plenty of progressive voices want to dictate the jokes we say and the stars who can, and can’t, host awards shows. Is it any wonder the Oscars ceremony went host-free for the first time in ages earlier this year?

He doesn’t let critics dictate his material, including his most recent Netflix special, “Humanity.”

Indiewire would like very much to change what Gervais has to say in public. The op-ed’s headline, “Ricky Gervais and Transphobia Have No Place at the Golden Globes,” makes the site’s intentions clear.

During Gervais’ 2016 stint hosting the ceremony he deadnamed Olympic Gold medalist Caitlyn Jenner from the stage, and transphobic commentary has been a throughline of his work since….

The star of Netflix’s “After Life” opened his 2018 stand-up comedy special “Humanity” – also on Netflix – with not one but three different derogatory remarks about Jenner, discussing her former name, referring to her as a man, as well as discussing surgery and her genitals….

In an age where comedians are rightfully being held accountable[emphasis added] for bigoted words and actions from years prior … Gervais continues to tweet vitriol toward the LGBTQ+ community only to face no repercussions.

When Indiewire takes a leap off the woke cliff, the site’s readers often trash the sentiments in the articles’ comments section. You’d think a news site would take that into consideration. Perhaps our writers’ views don’t reflect the readers’ perspectives.

The site eliminated the comments section for the Gervais op-ed. Readers can comment on other new stories, just not this one.

The editors must have anticipated the blowback and acted accordingly. It’s right in line with the Left’s new policy – silence voices with which we disagree.

The site still wanted some Facebook-generated traffic, and that platform allows readers to weigh in as they please (for the most part). The feedback proved exactly what the editors feared.

Peter Bennett: I forgot IndieWire is a “progressive” site and feels obligated to publish this sort of…..journalism 🙄

Alex Messad Casimiri: I think Ricky will be delightfull to see this article. Great stuff fo his next stand up show ahah

Lizanne Tulip: The virtue signalling in this article makes me ill.

Tony McIntyre: Ugh! If IndieWire and Variety keep going with this PC crap, I might have to unlike those pages! 🙄

Gustavo Vargas: Check out the documentary “No Safe Spaces” and wake me when this bullsh*t cancel culture is over. 😴

Mario Raygoza: this article is completely rubbish and only demonstrates why the Golden Globes do need Gervais

Steven Ivan Karim: The only reason I’m watching the Golden Globes is because of Ricky Gervais!

Gervais also saw some of this coming. He recently gave a peek behind the creative, and legal, aspects of his hosting chores.

‘I never do anything that terrible as it’s on network television, but I do have to show my script to a lawyer at the last minute…

‘They don’t change anything because I know the law and what I can get away with. I’ve never libelled anyone, and I’ve never had a complaint upheld!’…

‘Adding, ‘People asked me why I go to so much trouble to offend people and I said, ‘It’s no trouble. It’s easy!’

Gervais gleefully tells offensive jokes. And, up until now, he hasn’t apologized for any of them. Well, not officially, anyway.

I’d like to apologise for the joke I’ve just written. It is sick and unnecessary and shouldn’t be said in public. Please remember I’ve already said sorry when you hear it. Thanks.

So far, Indiewire.com is alone in demanding Gervais’ ouster. The site published its story Nov. 26 during a busy holiday week, so it’s not beyond the realm of possibility that other sites were follow suite. 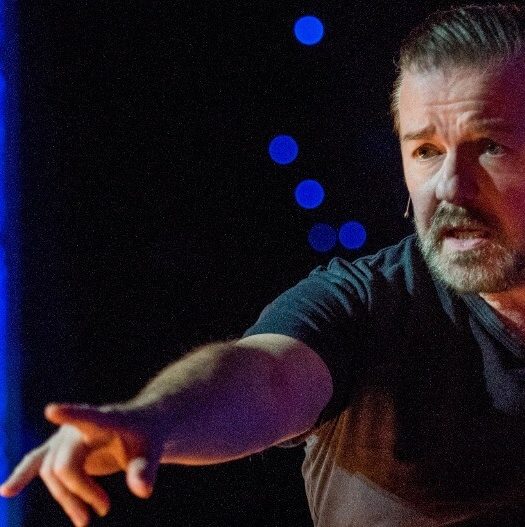 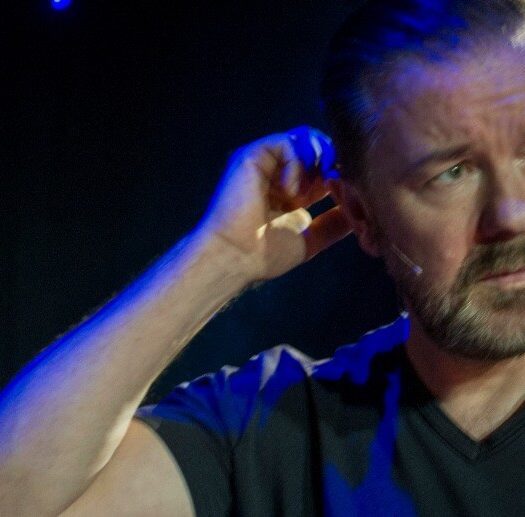