“The Huntsman: Winter’s War” isn’t a movie. It’s a franchise starter kit. And it shows in every frame.

Technically, the franchise started four years ago with “Snow White and the Huntsman.” That film made enough coin to warrant a new installment. But the film didn’t entrench itself in the culture at large. 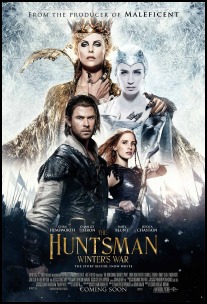 That leaves franchise vet Chris Hemsworth and a trio of talented co-stars left to make something out of next to nothing.

It almost works. But the studio’s machinations are never out of the frame.

The story opens with narration aplenty, taking us to a time prior to the events of the first film. We have not one but two evil queens on screen. Freya the Ice Queen (Emily Blunt) is like Elsa from “Frozen,” but a version who woke up on the wrong side of the iceberg.

Both actresses are having so much fun it threatens to become infectious. Maybe that will happen in the third installment.

The noble Huntsman (Hemsworth) can cope with them as long as his beloved Sara (Jessica Chastain) is near. Their passion angers Freya, who soured on that emotion thanks to a conveniently clunky subplot.

Soon, the action leaps over what happened in the 2012 feature, and our heroes must find that mirror, mirror from the fairy tale that started it all.

Or something like that. There’s little urgency to the matters at hand. We get far more out of two plucky dwarves (Nick Frost, Rob Brydon) and their running commentary.

It’s important to remember this is much ado about a classic yarn. That’s because “Winter’s War” isn’t appropriate for children. Some jokes are too sophisticated. Others are downright R-rated. And yet the simplistic narrative is better suited for younger viewers.

Just who is the target audience for this again?

One day we’ll look back on “Winter’s War” as the epitome of Hollywood’s franchise machine. All the parts are assembled before us.

Sometimes those elements produce movie magic all the same, like the recent “Jungle Book” update.

Not here. Especially when the screenwriters drag out that exhausted, “do you have a plan” trope.

“Winter’s War” is never dull despite a dearth of imagination. Hemsworth is heroic down to his DNA. Blunt and Theron snack on the scenery as if famished. And Chastain is a hearty warrior, even if it’s absurd to gape while the diminutive star man-handles Hemsworth.

The lack of complex storytelling and fully realized characters in reduces us to curious bystanders. That leaves us with a prequel/sequel straining to be the industry’s next go-to franchise. And, with global audiences hungry for Hollywood’s brand of over the top entertainment, that will likely happen.

The only question remaining? How to make new prequel-sequels to a prequel sequel?