Ron Howard’s “In the Heart of the Sea” checks off all the blockbuster boxes, from a handsome leading man to the right dose of CGI magic. And darned if Howard doesn’t deliver in fits and starts. There’s trouble ahead all the same, including a retro assault on those greedy capitalists.

Ron Howard’s latest film uses a trusty narrative device – a storyteller looking back on a great adventure – to set the whaling ship in motion. The framing works as intended, perhaps too well. Audiences may care more about the characters in these snippets than the heroes at the “heart” of the story.

In the Heart of the Sea - Official Trailer 3 [HD]
In the early 1800s whale oil did more than keep lanterns lit. It lubricated the local economy. Massive corporations, though, needed sailors strong enough to hunt and haul whales onto their vessels.

The New England whaling ship Essex sets sail for just such a mission, led by a captain (Benjamin Walker) given the gig for his bloodlines, not seafaring skills. First mate Owen Chase (Chris Hemsworth) seethes over a broken promise to command his ship himself. Chase accepts the assignment all the same in true working-class fashion.

The culture clash between the two men never fully registers, a reminder character tension can’t be summoned with ones and zeroes.

The same can’t be said of the movie’s villain. The Essex is set upon by the largest whale this side of Orca. It taunts and then attacks the ship, turning a whale-hunting mission into one of raw survival. 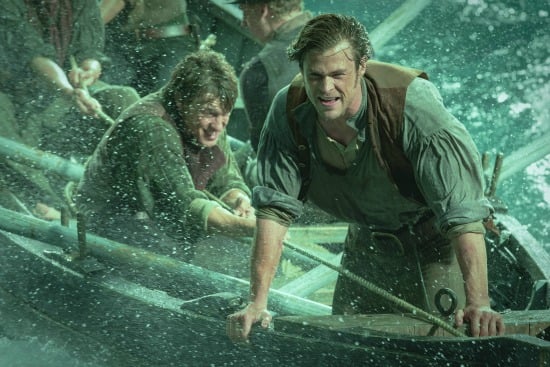 Let’s say one thing about a Howard production. The craftsmanship is beyond reproach. The sprawling dock where Essex is docked feels like it was swiped from a history book. The details of whale hunting come to life without a filter. Watching an undersized sailor maneuver his way into a whale carcass to extract the last oil traces inside is to appreciate Howard’s attention to detail.

Charles Leavitt’s screenplay, based on the book of the same name by Nathaniel Philbrick, offers too few personal revelations. There’s little here that makes the crew’s suffering our suffering.

Hemsworth is well cast as another larger than life hero. He’s too often a cipher, a preternaturally brave soul putting his life on the line for his crew mates. The actor cant summon the character’s inner life, a critical flaw once Chase is left clinging to a life boat for survival.

DID YOU KNOW: Composer Roque Banos used materials found on the ship shown in the movie, including the rope and sails, as percussion instruments to flavor the film’s score.

Yes, that’s how the author got inspired to write “Moby Dick.” Now, what’s inspiring Howard’s film? It’s neither pure adventure or survival 101. And a last-minute attack on corporate greed ignores some hard truths about the way capitalism works. A more balanced screenplay might toast an industry which improved the lives of thousands while keeping their homes well lit.

“In the Heart of the Sea” is no disaster, and it benefits from seeing it on the biggest screen in your neighborhood. Given the resources at Howard’s disposal, the film still feels like a misfire.