But here we go all the same.

“Here Alone” is like one of those very special episodes of “The Walking Dead.” You know the drill. The show’s signature gore gets lowered, and so does the body count. We’re left with familiar characters letting us into their personal lives.

Only with the AMC hit we’ve already gotten to know the characters in question. The stakes are exponentially higher, even if nothing of consequence happens before the hour ends. Besides, we could use a break from the weekly, “who’s gonna get gobbled up” meme?

That character-driven formula falls flat here, despite the noble intentions.

Lucy Walters stars as Ann, a woman living alone in the woods following a worldwide epidemic. Flashbacks reveal how her small family fled following news of the virus’ spread. They’re gone now, and there’s no one else in sight.

Even the zombies stay away, thanks to her crude camouflage methods. Cue the “yuck” factor.

Only she isn’t alone for long. A man and his step-daughter eventually cross Ann’s path. Each side is understandably wary. Survival instincts matter most now. Societal niceties are a thing of the recent past.

Can these strangers be trusted? Or should Ann stay solo and focus on her effective strategy for staying alive?

RELATED: Why ‘Girl With All the Gifts’ Is Zombie Catnip

That description is a charitable way of saying there’s precious little story here. We spend endless minutes watching the main characters crunch stale Saltines and improvise for food. These necessary actions add texture to your standard zombie feature, but after awhile audiences are hungry for more.

And they get little else with “Here Alone.” 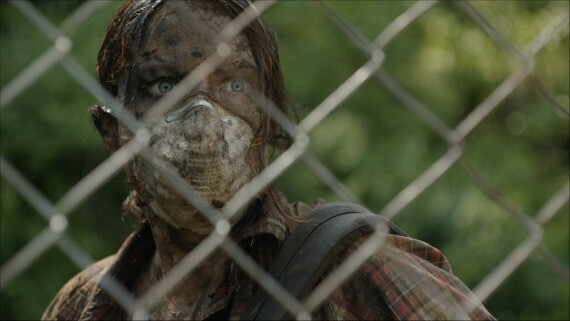 Walters is effective as a woman foraging for scraps in the unforgiving landscape. Adam David Thompson lets his character reveal himself slowly as the story unfolds, his guard gently lowering as his trust of Ann rises.

Gina Piersanti is the third member of this unlikely troupe, a teen clinging to the only family she has left.

The film’s copious flashbacks suggest how the nightmare all began. They also sketch in elements that are both perfunctory and drab. Yes, we know something happened to Ann’s husband since he’s nowhere in sight. Tasking a series of flashbacks to reveal the whole story simply vacuums up precious time.

Then again, if all we see are the main characters cooking food, dousing themselves in urine and excavating worms out of trees stumps maybe those flashbacks aren’t all bad.

FAST FACT: Actress Lucy Walters nailed a critical non-speaking part in 2011’s “Shame” because, as she recalls director Steve McQueen putting it, her skin was “translucent” enough to read her emotions.

For much of the film’s running there’s precious little in the way of tension or drama. The wariness with which the main players greet each other fades fast. The zombies are mostly an off-screen threat. The biggest suspense is who will eat the most crackers in a given scene.

You’ll be on the edge of your seat!

The film’s final moments find a conventional sense of purpose. It might not be original, but at least we’re treated to something resembling drama. We’re ultimately forced to guess the resolution, and anyone not half asleep by now will do so instantly.

HiT or Miss: Beware, horror fans. “Here Alone” isn’t for you. Nor will the story tantalize those curious about the undead genre but eager for character-driven yarns.