The Massachusetts Senator had a plan for everything, they cried. Only sexism could explain her shocking fall from front runner to also ran status. She wasn’t “likable” enough, sexist reporters alleged.

What else could explain her failure?

The Guardian said Sen. Warren “endured sexism at every step of her campaign.” The Senator herself happily played into the narrative.

“Gender in this race — you know, that is the trap question for every woman,” Warren said, standing outside her home in Cambridge, Massachusetts, after announcing she would be suspending her campaign Thursday. “If you say, ‘Yeah, there was sexism in this race,’ everyone says, ‘Whiner.’ And if you say, ‘There was no sexism,’ about a bazillion women think, ‘What planet do you live on?’”

Feminists finally grew silent this week, but it had nothing to do with Sen. Warren’s delegate debacle.

The “True Lies” alum even hosted a show on Viceland called “The Hunt for the Trump Tapes.” The conspiracy-laced series ended after one season, the titular tapes still out of reach.

It appears Arnold loathes the First Lady as much as her husband, given the following Twitter message. 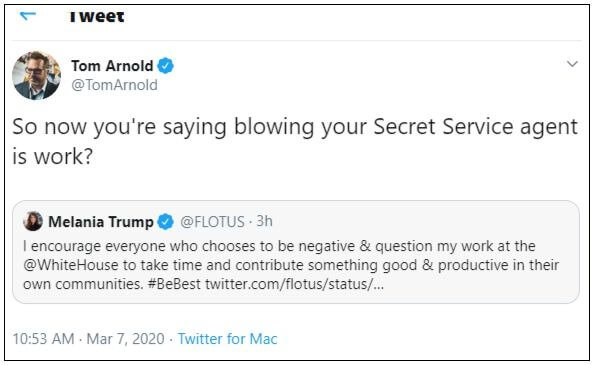 Certainly the same feminists who rallied behind Sen. Warren would rise up against Arnold.

Feminism is about female empowerment, not partisan bickering. No First Lady, regardless of party affiliation, deserves to be treated in that fashion. The comments play to the ugliest tropes that sexualize women.

Feminists would lead the bipartisan charge against Arnold, no doubt. Or so one would think.

The groups were asked Monday for either a brief interview tied to Arnold’s comments or a statement reacting to his verbiage.

No group so much as responded to HiT’s press requests. This shouldn’t surprise anyone, though.

Feminists routinely look the other way when conservative women are under attack. Consider the crude comments made against Nikki Haley, Sarah Huckabee Sanders, Laura Ingraham and other right-leaning women.

Groups like NOW rarely, if ever, speak up on their behalf. Yet when TBS sent out a Tweet comparing Hillary Clinton’s cackle to that of a hyena, the network’s own Samantha Bee called the joke beyond the pale.

And TBS swiftly withdrew the Tweet with a full-bodied apology.

It’s why the current First Lady will get no apology from Arnold. Nor will feminists rally around her in any way, shape or form.

Photo by Chairman of the Joint Chiefs of Staff on Foter.com / CC BY