Mary Shelley first brought Frankenstein, bolts and all, to life in 1818. Popular culture refuses to let him rest. There’s something about a scientist playing God that taps into our deepest fears. We can’t get enough of the man … or his monster.

The Denver Center for the Performing Arts’ take on Shelley’s tale, based on the recent London reinvention, hews closely to the source material. Forget about the flat top ‘do and the guttural FrankenSpeak. This monster is more thoughtful, a shrewd way to look at ourselves through the eyes of the ultimate outsider.

First look at the DCPA's 'Frankenstein'

The production still lumbers when it should be fleet of foot. A clever casting trick is the bolt of lightning powering the show. The actors playing Victor Frankenstein and his creation switch roles throughout the show’s run – Oct. 30 at Denver’s Stage Theatre.

Some judicious editing would have proved just as potent.

For this night, Sullivan Jones plays the scientist who brings life to an assemblage of dead body parts. Mark Junek gets the flashier role, that of a monster more in touch with his humanity than his creator.

Inside look at the making of 'Frankenstein,’ Part 4: Costumes

The show opens with Junek writhing on the stage, an approach that borders on camp. The show is funnier than we expect from the Frankenstein lineage, but the laughs at the outset are unintentional.

This birthing process is fascinating at first before it overstays its welcome. Like several sequences in the play, it consumes too much valuable stage time.

The newly hatched creature scares some souls before bumping into a blind man. The stranger, unaware of the creature’s freakish visage, wants only to help.

He does that and so much more.

The blind man tutors his unusual friend. Soon, a creature who once spoke in grunts and growls is as literate as a PhD candidate. He still longs to be reunited with his maker. 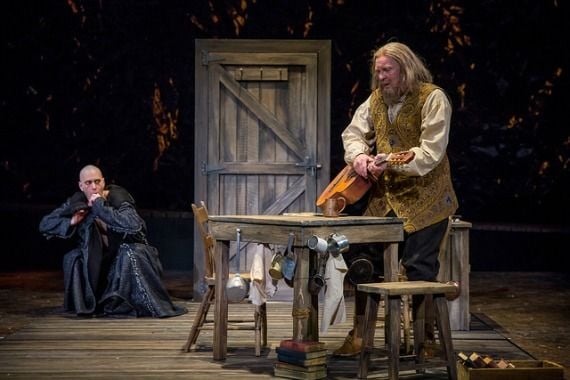 Jones’ Victor Frankenstein is a beast of another sort. He’s indifferent to the romantic longings of his beloved Elizabeth (Jenny Leona). What could she possibly see in him?

His behavior intensifies when “father” and “son” are back together. Their exchanges take on a tired, circuitous air similar to other reams of dialogue in the production.

“Frankenstein” reveals what happens to an innocent thrust into a cynical world. The monster is an infant of sorts, one with super strength and a quick temper. He’s beaten, mocked and lied to over the course of the show.

It’s no wonder he eventually resembles the monster he’s assumed to be.

RELATED: Director Brings Shelley’s ‘Frankenstein’ Back from the Grave

That’s the kind of interpretation that makes the story timeless. Only the individual elements don’t fall neatly into place. Victor Frankenstein could use Finishing School lessons. It’s fine that he’s indifferent, obsessed even, with his handiwork. A dollop of humanity would help balance the tale.

The production is not without its shocks, and it earns them the hard way. One ghostly reappearance is downright creepy even if it isn’t accompanied by the standard horror tropes. An unexpected slash of violence erupts at a critical time, somehow coming off as both tasteful and garish.

That’s not an easy combination.

Inside look at the making of 'Frankenstein,’ Part 2: On the stage

The show’s sound design, aided by practical effects include both fog and rain, make “Frankenstein” an almost tactile experience. The stage is a whir of activity but never feels frenetic or forced. The set pieces may be spare, but they evoke the era and the monster’s quiet desperation.

RELATED: ‘Frankenstein’ Lives … to Pass Judgment on Us

“Frankenstein’s” casting choice serves up something more than an actor’s challenge. Junek is white while Jones is black. Seen even from a quality seat in Stage Theatre, the physical difference is negligible. On this particular note, both are in fine form. Junek’s monster, given the breadth of the character, is borderline exceptional.

Let’s be grateful the story doesn’t run with the casting’s racial blend. Audiences can read into the material, the pull and push between the main characters as they wish. Shelley’s yarn may be ancient, but it’s still fresh enough that it doesn’t demand PC tinkering to suit the times.

“Frankenstein” isn’t as scary as an October production could be. It’s still creepy and thought- provoking. a worth addition to the shock canon. It might have intruded on our nightmares if the good doctor wasn’t such a fiend.