Stuck for a Halloween costume this year? Costume designer Kevin Copenhaver suggests a trip to your local hardware store or sporting goods shop.

You might see something that sparks a bold new look for the holiday.

“What if you spray painted [a catcher’s mask] a different color and glued a piece of tubing to it?” asks Copenhaver, the costume crafts director at The Denver Center for the Performing Arts.

Video: Meet the ghost that was bigger, wider and creepier

Both Copenhaver and fellow DCPA costume colleague Meghan Anderson Doyle take time out of their busy schedules to dress up each Halloween. Yes, adults dress up as much as the toddlers do this time of year.

And they have some Halloween costume tips to help shape your next disguise. You can even make it a couples thing.

The Secret Place to Start Your Search

“You start in your own closet. What do I have that could maybe be …” Anderson Doyle asks, and let the inspiration flow. It could begin with something simple, like changing the laces on an old pair of boots, she says.

“Find the one thing that starts the whole process, like a cool hat you find at the thrift store,” Copenhaver adds. Even an inexpensive item, like giant eyebrows cut from a.99 cent piece of craft fur, can make a statement,

“Sometimes the simplest things are absolutely the best,” Copenhaver says.

Putting all the elements together doesn’t require a seamstress’ touch. Some safety pins will do wonders in a pinch, says Anderson Doyle, a costume design associate with DCPA. “If you hot glue some fabric [together] you might end up with not much of a costume at the end.”

And if carrying a smart phone on the big night is an issue, here’s your solution. Fold a handkerchief together and create an impromptu pocket inside your costume with those same pins, Copenhaver says.

The One Thing to Remember with Makeup

When it comes to makeup, think contrast. Dark eyes and either pale or greenish skin is a good start for a zombie’s complexion, Anderson Doyle says. For a more disturbing look, use Elmer’s Glue to affix oatmeal to your face.

As a child, he broke into his mother’s markers set and drew all over his face to become the Phantom of the Opera.

“I wouldn’t suggest doing that,” he says with a laugh.

“It’s a one-off idea, using a recognizable character taken to a different level,” she says, like a zombie-fied Charlie Brown.

Your Halloween Costume: Not a One-Day Affair

Anderson Doyle says she initially wanted to act, not create costumes for a living. She fell in love with the design aspects of live performing and found herself pursuing a different career.

For Copenhaver, he still remembers the smell of greasepaint backstage at a college production of “Oliver.” The show gave him his first exposure to the theater.

Today, the duo work in feverish bursts to make shows like “Lord of the Flies” and “Vanya and Sonia and Masha and Spike” feel authentic to both the actors and public.

Montage: 'Lord of the Flies'

It all starts with a design conference early in the production. The company’s artistic director and show director will break down the critical elements of the piece.

“We’re all together, the whole design team, and we then start to do research about time period of characters [after that], to weed out the things that don’t work and collaborate on the things that are essential,” Anderson Doyle says.

Many DCPA shows involve existing material, like the annual “Christmas Carol” production. That doesn’t get the costume designers off the hook. 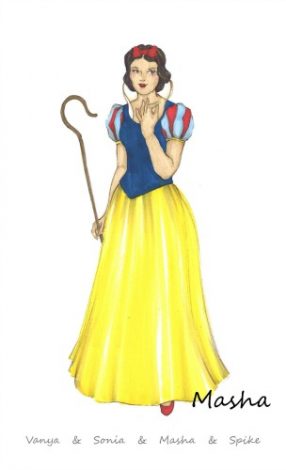 “I don’t like to do the same thing twice,” Copenhaver says. “My attention span is short. I always want to do something new and different … we put as many new clothes in the show as possible.”

To get the costume details just right, Copenhaver and Anderson Doyle will scour local stores, consult books and web sources and even go online shopping to nail every detail.

For “Lord of the Flies,” Copenhaver found a period-appropriate prefect badge on eBay.

The biggest artistic challenge can be getting on the same page as the production’s talent.

“The hard part of the job, frankly, is that our business involves a lot of ego on everybody’s part, not just the actor’s part,” Copenhaver says. “Sometimes designing costumes requires a little bit of psychology … you learn to not take everything personally.”

Both Copenhaver and Anderson Dodge say the best praise they can receive is for audiences not to directly address their handiwork.

“I’m excited when people aren’t distracted by the costumes,” she says. “Oh, these are real clothes real people would wear.”

“You want the complete end product … to be seamless in that respect, where the whole package works together,” he adds.

The Snow White-style illustration from Meghan Anderson Doye’s sketches for ‘Vanya and Sonia and Masha and Spike.’