It’s not only the time invested in watching the shows/movies, but also the costs associated with buying T-shirts, pins, autographs or other memorabilia.

However, fans can run into some unexpectedly price tags when it comes to conventions like Comic-Con. It demonstrates the word “fan” is just shorthand for fanatic. Only a fanatic would put up with some of the price gouging that goes on.

Fandom … for a Price

Let’s start with the hotel costs. Hotels in San Diego are already pricey, even in the best of times. But when Comic-Con comes to town, prices don’t just skyrocket. They warp into outer space.

Hotels 25 to 30 minutes away from the convention will double or even triple their regular rates. A convention goer could easily spend $2,000 for a 5-night stay. And good luck even finding hotel rooms, even with blocks of rooms set aside for Comic-Con.

Next comes the cost of food. With a captive audience in the San Diego Convention Center, a bottle of water that sells for a dollar outside goes for $3.50 inside.

A one-dollar bottle of soda? That will set you back $4 at the Convention Center concessions. Small, pre-made sandwiches with minimal meat fillings are $8.75. Nachos or hot dogs are relative bargains at $5 each, but as is the case with sandwiches, you have to spend an extra $2 to get chips.

So, the classic sandwich, chips and soda lunch runs $14.75. That doesn’t seem so bad until you bite into your sandwich and discover there’s only one slice of meat.

Then there’s the real meat of true fandom: buying things that remind you of your favorite show, movie or star. You can buy a ticket so you’ll have a place in line to get an autograph, which will also cost you. You can buy stuffed animals, T-shirts or action figures. There’s comic books, paintings, or prints of your star/movie/show.

Wandering the Exhibit Hall is dangerous to your wallet or purse. They’re selling things you didn’t even know you wanted but now can’t live without.

Want a hand like the Hulk? Someone is selling an expensive latex reproduction of it. How about a Millenium Falcon that floats and maneuvers because it’s a quad-copter? Yes, you can get that, too.

If you can imagine it or desire it, someone is selling it to Fandom Nation. All for an outrageous price of course. Because that’s what the market will bear. 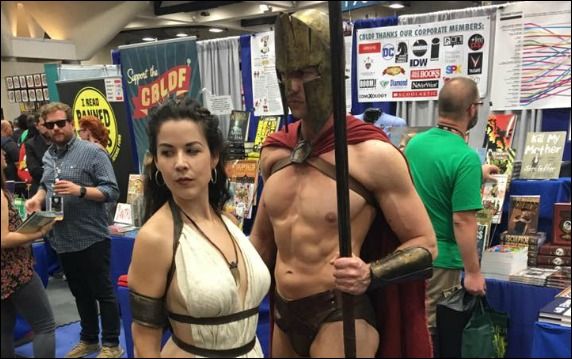 Finally, there’s the wasted time standing in line. And at Comic-Con, stand in line you will (which sounds vaguely like a Yoda quote).

You’ll stand in line to get in, ride an escalator and use a bathroom. You’ll stand in long lines to see panels, sometimes having to arrive a panel or two ahead of the panel you really want to see.

You’ll stand in line in the Exhibit Hall, just to get into a booth or to get an autograph. You’ll even stand in line just to pick up a free promotional comic book that’ll get thrown away a day or so later.
Even with the sky high cost of fandom, the craziest thing is that people will do it all over again

Bones is a special HiT correspondent at the 2016 Comic-Con in San Diego.