Certainly, I’m not alone in my affection.

The film has grown in popularity since it was released in theaters on Feb. 17, 1989. It’s ranked 62nd in the Internet Movie Database’s list of best comedies of the ‘80s. “The ‘Burbs” is popular enough to have been released multiple times on DVD, including most recently in a spiffy Blu Ray edition loaded with loving extras like an hour-long documentary and darker, alternate version of the movie from director Joe Dante.

But is the movie a cult classic, or is it simply colored by nostalgia from ‘80s and ‘90s kids who grew up watching it with family or friends? In honor of its 30th anniversary, let’s find out.

First off, the movie’s concept can be summed up easily: A suburbanite’s peaceful vacation at home is disrupted by his weird new neighbors, the Klopeks. Do they just like to keep to themselves? Or is there something more sinister about them?

Hanks stars as Ray Peterson, our hero. This film came out right around the time “Big” launched him into super stardom. Hanks anchors the film with his Everyman charm and perfect comic timing.

The movie boasts a great supporting cast that also includes the late, great Carrie Fisher (as Ray’s wife)and Bruce Dern as the military vet neighbor Rumsfield. Rounding out the talented cast is Corey Feldman (in peak ‘80s form) as a spacy teenager and comic actor Rick Ducommun as Art, the busybody of the street.

Perhaps the key to loving “The ‘Burbs” is wondering about your own weirdo neighbors.

I grew up in a suburban setting not too different from what’s portrayed in the movie. The neighbors all knew each other. The kids would play outside on lazy summer nights. But, like many streets, there was that one house. My family lived next door to them.

These neighbors would yell at you if you parked too close in the cul-de-sac. They would sit outside and just stare at people. My dad swears that, after my parents moved years later, he would still get weird phone calls from our old neighbors.

FAST FACT: “The ‘Burbs” wasn’t a hit during its theatrical release. The movie earned $36 million in 1989, coming in 34th place that year.

It turns out, that’s exactly the type of background screenwriter Dana Olsen had as a child. In the press kit for “The ‘Burbs,” he explains, “I had an ultra-normal middle-class upbringing. But our town had its share of psychos.” Olsen added, “As a kid, it was fascinating to think that Mr. Flanagan down the street could turn out to be Jack the Ripper. And where there’s fear, there’s comedy.”

Olsen explained that he “approached ‘The ‘Burbs’ as ‘Ozzie and Harriet Meet Charles Manson.’”

“In high school, my family bought a house in a middle-class neighborhood next to a real, live Mr. Klopek. The neighborhood eight-year-olds let us know he had bodies in the attic and we occasionally saw him drive his decrepit pick-up down the 40-foot driveway to check his mail in the middle of the night. So, when I saw ‘The Burbs’ for the first time, it was hysterically relatable and quickly became a classic movie for our family.”

Growing up with the film prompted me to seek out “‘Burbs” memorabilia and collectibles. The movie’s soundtrack by the legendary Jerry Goldsmith (“Planet of the Apes,” “Alien”) creates a mood that captures both the movie’s zany comedy and the creepy undertones. In 2019, Waxwork Records released a deluxe, vinyl record of the score.

On eBay, I tracked down the film’s press kit. It includes still shots of the actors, backgrounds on the filmmakers and is all encased in a nice “’Burbs” folder. My wife Bethany’s reaction upon seeing this? She thought such devotion to a simple ‘80s comedy was a little weird.

Though Bethany patiently indulges my fandom, she doesn’t necessarily share it. When we first were 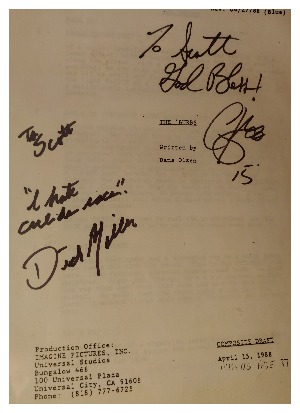 dating, I excitedly showed her the movie. Asked about her opinion for this article, my wife replied, “Huh. Well, I guess it was good. I don’t remember it that well.”

RELATED: ‘Life After Flash’ Is Catnip for Cult Movie Fans

Years ago, I found the film’s screenplay online. The script contains the darker and more sinister ending. In 2015, the Potomac Nationals, a minor league baseball team in northern Virginia, announced that Corey Feldman would be signing autographs to celebrate “Goonies” night. I told my wife we simply must go.

The line to meet Feldman wrapped half way around the stadium. The team’s staff told me it was too late to get in line. Undeterred, I waited for the ‘80s star after he finished a smoke break. I think he hadn’t met many fans with “Burbs” screenplays and happily signed it.

Tracking down Hanks for his signature might be a tad more difficult. He’s not likely to come to any minor league baseball games.

At a convention, I got co-star Dick Miller (who sadly passed away in January) to also sign the script. His memories were mostly of the joy of working with the talented director, Joe Dante. In addition to “The ‘Burbs,” the two worked on “Gremlins,” “Gremlins 2,” “Matinee” and other movies.

Thirty years later, “The ‘Burbs” shows no signs of disappearing. It’s been released on VHS, DVD, Blu Ray and can be streamed on Amazon. It may not be the first movie that comes to mind when you think Tom Hanks, but, to me, it’s one of his funniest roles.

As society gets more fragmented and we spend more time in our houses and behind our screens, the movie is even more relatable. Just what is your neighbor doing over there?

If you’ve ever asked that question, “The ‘Burbs” will show you just how weird the answer can be.

Scott Whitlock is the associate editor for the Media Research Center’s Newsbusters. Previously, he was a contributing editor and the MRC’s senior news analyst. Scott’s work has been published in The Washington Times, National Review Online and other outlets.