The 'Goonies' star rocked a less than full house in Colorado, making more costume changes than Cher along the way.

“Listen,” my wife said a few weeks ago in a serious tone, “Don’t you think that by buying a ticket to this thing, you’re contributing to Corey Feldman’s personal deterioration?”

“You don’t understand,” I quickly replied, trying my best to keep a straight face (but not entirely succeeding). “He’s the last remaining Corey. Haim’s gone. I might not have another shot at this.”

She rolled her eyes. I laughed. The conversation started soon after I learned of two remarkable things.

It was kind of a big deal.

That’s not to say that it’s new (or even all that strange) for an actor, who has a passion for performing music, to do a little touring. Over the years, we’ve seen such side-projects from the likes of Bruce Willis, Jared Leto and, more recently, Kiefer Sutherland.

In these cases, such appearances hardly feel self-degrading.

But in this instance, my wife’s concerns came from the event poster that was circulated on social media by The Moxi Theater in Greeley, Colo. That’s where Feldman was to perform.

It featured a picture of the actor sporting long, jet-black hair and clad in a retro leather jacket (lending him a magician-like appearance). He was flanked by a group of young blonde women wearing white lingerie and large angel’s wings. These women made up Feldman’s band, called “The Angels.” That Greeley stop was part of “Corey’s Heavenly Tour” (worded in a hot-pink font).

RELATED: Why ’90s Nostalgia Isn’t Ready for Its Closeup

The imagery struck my wife as sad and desperate. I had a different take. I thought the presentation was corny by design, and that the tour was essentially tongue-in-cheek, self-amusing performance art.

Regardless, the nostalgic allure of Edgar Frog and Teddy Duchamp appearing in my town piqued my curiosity enough to lay down a few bucks for a ticket. I convinced a friend to do the same.

I actually figured there’d be quite a few fellow 40-somethings in attendance, for the same reasons I had. That didn’t end up being the case.

Only a dozen of us were waiting outside when the theater’s doors opened Sunday night. Just a few more poured in while the first act — a woman with a guitar who introduced herself as Feldman’s costume designer — played her set. She was actually pretty decent.

About 30 or 40 more people came in while the second act performed — a local joke-band whose obscenity-heavy rap lyrics, robot-dancing and excessive sweating left much of the audience exchanging confused glares.

I took that time to comically live-tweet the experience (and the anticipation). Within seconds, I noticed that Feldman himself was retweeting me (apparently from his tour bus parked behind the building).

By the time the lights were dimmed, (heavily embellished) statistics of Feldman’s past audience-draws were projected across the back wall of the stage. At the Moxi Theatre there were probably a little more than a hundred individuals in attendance. But the crowd was ready for the show (some more than others, judging by the amount of slurring and stumbling). 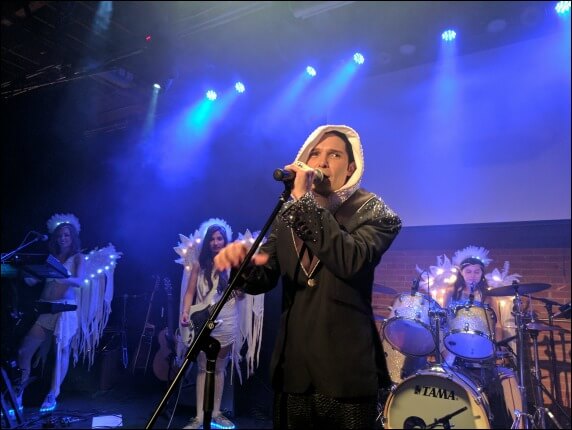 The scantily-clad Angels hit the stage, their wings smacking against each other as they took their places behind their instruments. They began the set, and moments later, Feldman power-walked onto the stage to loud cheers. He was dressed in full Michael Jackson attire: black fedora pulled down low, single glove, tight black jacket and matching pants. His shoes had battery-lit soles.

I had forgotten Feldman was a close friend of Jackson’s years ago. The lasting influence of that relationship was quite apparent.

Emulating Jackson’s dance moves (which he ended up doing for practically every song), he pumped out lyrics in a raspy voice, to a monolithic guitar and drum beat that seemed to serve no deeper purpose than encouraging the audience to clap along.

The crowd was ready for the show (some more than others, judging by the amount of slurring and stumbling)Click To Tweet

Mixed throughout the high-energy set (complete with a laser-light show) were Jackson covers, and also covers of songs featured on soundtracks from Feldman’s more popular films. These included “Stand By Me” and “The Goonies ‘R’ Good Enough,” which were accompanied by movie scenes projected on the wall.

The same was true for a tribute piece to Feldman’s late friend and co-star, Corey Haim.

While The Angels remained on stage throughout the show (including one of them nailing an impressive guitar solo), Feldman would disappear after every one or two songs, and quickly return with a different outfit — either a Jackson variant or the donning of a high-end hoodie.

The show was just as weird as one would imagine. While Feldman lacked musical talent, he seemed legitimately interested in keeping the fans engaged. He worked the audience pretty well, always moving and leaving little opportunity for boredom to set in (or for the handful of hecklers that showed up to get a word in edgewise).

All in all, the crowd seemed to have a really good time, even if some of it was in jest.

After finishing the set, thanking the attendees and clearing the stage, Feldman and The Angels were called back for an encore by the audience chanting “Goonies Never Say Die!” — a move that the band’s roadie was unable to hide his amusement over.

The group performed one final, lackluster song and bid everyone farewell to loud cheers, leaving me and probably many others still asking: Was this all a joke?

After nearly an hour and a half of the spectacle, I’m was no closer to the answer. Does Feldman truly view himself as a serious musician (he does have multiple albums, after all)? Or does he do this type of thing just for grins?

Is he in desperate need of money (and using marketable ’80s nostalgia to score some), or is he just out there having a good time and seeing the country? Was my wife right, or was I right? I truly don’t know the answer to any of these questions.

What I do know is that for $20, I got to high-five a pop culture icon from my youth and take some silly pictures and videos for my social media friends. Maybe it was worth it. Maybe it wasn’t. But hey, you only live once. Perhaps that’s how Feldman sees things, too.

John A. Daly is the author of the Sean Coleman Thriller Series, including the upcoming novel “Broken Slate.” He also contributes to BernardGoldberg.com. Photo credit: John A. Daly. 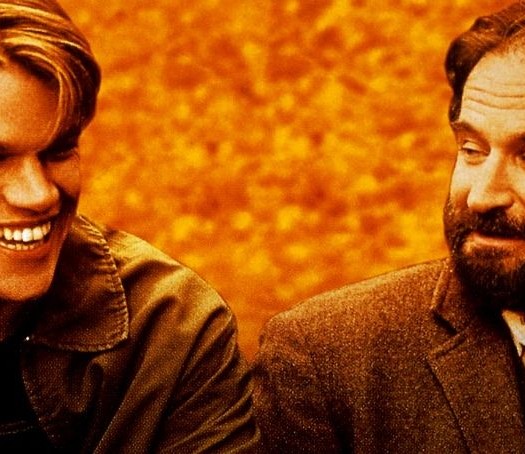 How Well Do You Know These Killer ’90s Movies?

Read More
How Well Do You Know These Killer ’90s Movies? 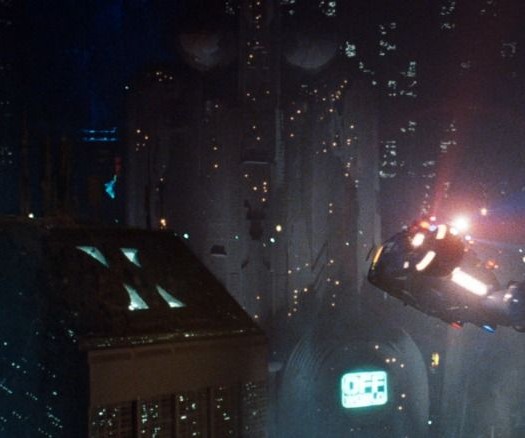 ’80s Movie Trivia: How Many Can You Get Right?

Read More
’80s Movie Trivia: How Many Can You Get Right?