The “Appalling Stories” series has always been about the villains.

When Ray Zacek, Paul Hair and I developed the idea, we had already been villains ourselves for years. It’s evil to be white, male and straight like us in select circles today.

Paul and Ray are both right-leaning military veterans. I’m a conservative Jew. According to our so-called cultural leaders, that makes us bad people. We, the Patriarchs, are playing the game of life on Easy Mode and sticking it to minorities along the way, they insist.

This is why we wanted to make protected groups the villains in “Appalling Stories:” because we’re not supposed to. Now that the Culture War has invaded every last element of daily life, we decided to be active participants rather than passive observers.

We continue that mission with “Appalling Stories 4,” available now.

You can either sit back and complain about the repressive, disgusting, politically correct mess our culture has become, or you can do something about it. So our bad guys are transsexuals and abortion enthusiasts, environmental extremists and left-wing college professors, Antifa rioters and fat acceptance activists.

If the cultural Marxists put them on the front lines of this Culture War, we’re going to cast them as the baddies.

Is there anything else that the right can do to effectively fight the Culture War? Writing a series of fun, quality, counterculture books that skewer the left’s sacred little cows is a step in the right direction. But what else? I asked contributors to “Appalling Stories 4” to see what they thought. 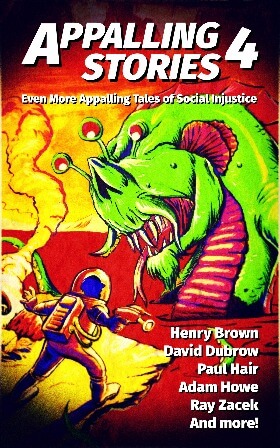 Henry Brown, author of “The Retreads” series of military adventure novels and writer of the “Hockey Man” action story, takes a No Retreat, No Surrender approach to the Culture War:

Some of us sincerely don’t want to mess with politics; but eventually politics will be messing with us—and our work. Over half of Millennials believe that socialism is a great idea because the left has slipped little doses of Marxist conditioning into their entertainment piecemeal, gradually but persistently, over the course of their entire lives. The left won every battle in the Culture War for generations because good men did nothing. But now myself and some others on the right are on the warpath—and we sure as hell aren’t going to surrender because the Hive Mind Thought Police lie about us, call us names, and accuse us of various “isms.” I happen to believe the remnants of the culture I love are worth fighting for; so may God give me the wisdom, courage, and strength to keep at it.

C.S. Johnson thinks that fighting the Culture War starts first and foremost in the home. She’s the author of “The Starlight Chronicles” novel series (among many others) and wrote the satirical story “Fatgirl Goes to the Fugly Pride Parade:”

If you are fighting the culture wars on the right, then in the veins of St. Mother Teresa and Jordan Peterson, “Go home, love your family, and clean up your own act.” Too often we look for “easy” answers, but loving people is hard work. Go home, turn off your social media, pay attention to your family, and seek to grow as a unit as much as individuals. If you’re going to take on the culture at large, learn how to stand firm in your own foundations first. They must be unshakable if you’re going to withstand significant cultural opposition. The only reason I am able to write as much as I can—to help create a conservative-leaning alternative for entertainment—is with the support of my family. If you are alone, find a support system you can invest in that also has your back. It takes time to find or create these, but no one is going to win a war all by himself.

Paul Hair, co-author of “Hating Jesus: The American Left’s War on Christianity” and the adventure story “The Chosen One” is looking to create an alternative to mainstream entertainment’s degeneracy:

Those running Hollywood and other mainstream entertainment hate people like us, and no amount of complaining or begging will change their hardened hearts. We need to be the change we want to see, which is why I started writing fiction. I’m not alone, either. I’ve met a lot of talented people who are producing art (novels, comic books, music, and more) outside legacy channels. Independent artists are growing in quality and quantity, and anyone who wants to fight back can turn to us for compelling and entertaining work.

Chrome Oxide, the author of “28 Minutes into the Future” and co-writer of “Let Them Eat…” put his unique spin on the subject:

The only way to win the culture war is with yogurt…and a joke. A humorous spin gives readers incentive to rethink their position. That’s why I warn undocumented vampire immigrants to avoid using plastic straws when sucking the life blood out of their victims since every California politician knows that straws are bad for the environment.

Ray Zacek, who wrote the disturbing horror anthology “The Belly of Provence and Other Tales,” as well as the dystopian story “The Garden of Earthly Delights,” suggests a multipronged attack:

To win a war, attack enemy infrastructure. In this Culture War, that’s the Big Three: media, entertainment, and academia. I advocate a reverse BDS: boycott, divest, and (as a writer) satirize. Ridicule and sarcasm are available weapons against the pretensions of elites and their vaunted institutions. The Emperor is always trotting about naked, so give him a good guffaw and snicker at his shrunken appendage. Starving them of funds works, too. The bloated tuition at our ideology-driven universities is a national scandal.

Adam Howe, who under the pseudonym Garrett Addams won Stephen King’s legendary “On Writing” competition, is the author of several short stories and novellas, including “Die Dog or Eat the Hatchet.” In “Appalling Stories 4,” he wrote the hysterical story “Foreign Bodies,” and here he explains his anti-SJW stance:

Must admit I had serious reservations about participating in “Appalling Stories” for fear of the harm appearing in a “right-wing” publication might do to my writing career in today’s cancel culture. That alone tells a sad f—ing story about where we are right now. I’m the token Brit of this group—what a triumph for diversity! As a voter, I’ve cast my vote left and right, and today I’m centrist who swings (yeah, baby!) left and right on certain issues that are no one’s business but my own…. As to the question: as a writer of satirical pulp, I never like to get too highfalutin about this kinda stuff. Ultimately a good story’s a good story. Or at least, it should be. It does seem to me that all too many books are wearing their progressive politics on their dust jackets, which requires the reader to indulge the SJW hysteria (or just not read the book).

A lot of name genre writers strike me as being far more passionate about the political opinions they tweet than the fiction they write. Subtext should remain, as the word would suggest, below the surface. Frankly I just wish we could shut the f— up about politics for a second and get back to entertaining readers with what we write. In purely mercenary terms, it seems shortsighted to ignore (and often to demonize) half of the marketplace…and at present a slim majority of the marketplace.

“Get Woke, go broke” is no joke, and when the number crunchers crunch their numbers, I would hope that we can return to something like normalcy. But maybe it’s like they say: hope in one hand, s–t in the other, see which hand fills up first.

Paul Clayton, author of the “Calling Crow” series and writer of the story “Adiós, America!” thinks that the focus should stay on literature and education:

Why do young Americans come out of schools and colleges hating America? Because American schoolteachers and librarians choose books for children from the American Library Association (ALA). What does the ALA list recommend? “Amelia Bloomer Project…the best feminist books for young readers, ages birth through 18, created by the Feminist Task Force. The Rainbow Book List, created by the Rainbow Book List Committee of the Gay, Lesbian, Bisexual, and Transgender Round Table.” What can we do? Write great books. Lobby our political leaders and libraries. Challenge our schools over their book selections. Create our own American Library Organization.

Mike Baron, author of several novels, including “Florida Man,” and the author of the satirical story “Free Gershwin,” suggests that we need to drown out the tide of cultural rot with conservative-authored stories:

The culture war is complex, yet remarkably simple. Years ago, cultural Marxists moved into entertainment, media, and education. As P.J. O’Rourke points out, “At the core of liberalism is the spoiled child—miserable, as all spoiled children are, unsatisfied, demanding, ill-disciplined, despotic and useless. Liberalism is a philosophy of sniveling brats.”

They control media, entertainment, and education and prefer not to suffer alone, which is why they use these disciplines to dragoon others to their point of view. They’re going to pan any Clint Eastwood movie. They’re going to s–t on anything that smacks of patriotism. They are going to stick to the NARRATIVE and the AGENDA, no matter the logical fallacies. Thus, it becomes imperative for conservatives to advance stories that offer an alternative to cultural suicide.

My story in “Appalling Stories 4” is called “My Lai,” and it’s a bizarre mixture of dystopian science fiction and horror. In this very space I wrote about not only how to fight the Culture War, but also how we’re alone in fighting it.

RELATED: It’s Official: National Lampoon 2.0 Is Woke to the Core

Conservative, Inc. is entirely uninterested in taking risks, let alone winning. There are few leaders both willing and able to advance the conservative agenda, and the big names in conservatism, including some of your favorite writers, are not going to step out of their cliques to lift anyone else up.

Conservative media, as it stands now, is an ossified system based on the hierarchy of the early 2000’s blogosphere, and entirely useless to today’s cultural challenges.

You deserve better. You’ll find it in “Appalling Stories 4.”

David Dubrow is the editor of the “Appalling Stories” series and the author of the Armageddon trilogy of Biblical horror novels. Find him at his website.