Actors train for years, sometimes decades, before starting their careers.

Others get their first gig in unconventional ways. The young lead in 2012’s “Beasts of the Southern Wild,” actress Quvenzhané Wallis, had never acted before director Benh Zeitlin discovered her at a library -based audition.

And then there’s Cash Adams. Young Cash has a cameo in “Unplanned,” but the moment isn’t what you might expect.

The new movie, which surpassed box office expectations with a $12.5 million haul (and counting), takes a withering look at Planned Parenthood. Ashley Bratcher stars as Abby Johnson, the former Planned Parenthood director who had an extreme change of heart regarding abortion.

A critical scene shows Bratcher’s character watching an ultrasound procedure up close. The visual has a powerful effect on her pro-choice stance. Cue Cash Adams. He’s the baby seen, via ultrasound, in that sequence. 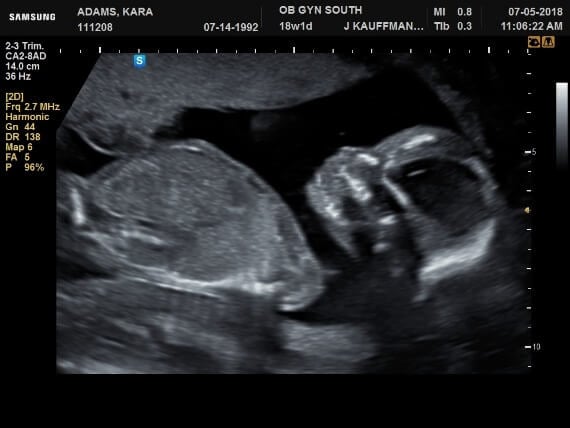 Parker Adams, the lad’s father, served as an editor on “Unplanned.” He and his wife learned a week before he joined the film’s crew about Cash’s arrival. So when the production needed an ultrasound visual to complete that sequence, they had an on-set volunteer – Kara Adams.

“Cash is now four months old, and he sure is a character. But what did we expect? He’s been acting

since before he was born,” Parker Adams says.

He even has his own IMDB.com credit to prove it. That makes him the youngest actor credited on the influential film site, according to “Unplanned” producers.

The appearance turned an already personal film experience into something more profound, the boy’s parents say.

“Whether it was hearing his heartbeat for the first time at his eight-week ultrasound, seeing him squirm and wiggle at 13 weeks along, or watching him kick in response to our voices, these were all constant reminders of the incredible human life that God was forming,” Parker Adams say. “But these moments also served as an anchor throughout process of editing ‘Unplanned’ as I could relate more deeply to the scenes I had in front of me.”