I suspect his career will suffer no long-term damage from appearing in this cheap, Jason Bourne-wanna-B-movie. Just because he can make a movie like this and get away with it, does it mean that he should?

EXTRACTION (2015 Movie – Bruce Willis, Kellan Lutz, Gina Carano) – Official Trailer
Kellan Lutz stars as Harry Turner, a CIA operative who, like his father Leonard (played by Willis), is knee-deep in dangerous, explosive field work. When Leonard is captured, Harry teams with a former colleague and ex-girlfriend (Gina Carano) to save Dad and uncover a veil of deception taking place within the agency ranks. Harry can hold his own since, as his longtime friend (played by D.B. Sweeney) informs us, “you’re a Turner.”

Lutz is a good-looking movie star but, between this, “The Legend of Hercules” and the “Twilight” saga, I’m not convinced this model-turned-actor can carry a movie. Sorry kids, but hitting the gym isn’t an adequate substitute for acting classes.

Unlike Lutz, Carano is the real deal, an action movie star who can carry a movie, has oodles of charisma and doesn’t need a man or woman to do her own stunts. Yet, other than her breakout work in “Haywire,” she has yet to star in a movie that deserves her.

Here, she has few moments to shine and her line readings are wooden, but so is everything else about the movie. I felt bad for Sweeney, particularly when he’s stuck giving exposition about “the condor prototype.” I wish the aliens from “Fire in the Sky” would come and abduct him out of this movie. Between this and turning up in the VOD “Speed” rip-off, “Heist,” the appealing Sweeney needs better roles. He and everyone else here deserves that much.

Director Steven C. Miller opens with Willis Liam Neeson-ing his way out of a villains’ lair and gives us a slick opening credits sequence that made me optimistic. Likewise, an overly busy electronic score, a camera that rarely stops moving (even during the talky scenes) and the deadly serious turns by the actors make you believe this could go somewhere. 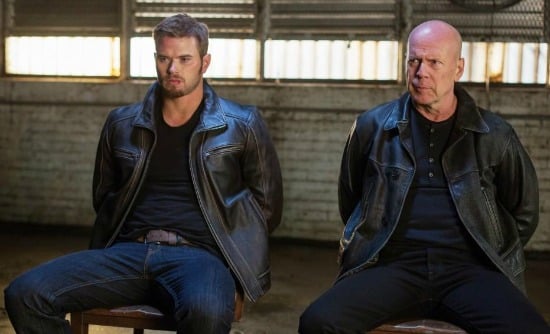 What unfolds is a glossy but cheap time waster, with many scenes appearing to have been shot in an empty steel factory. Seriously, every one of Willis’ scenes (which were likely shot in one day) could have been filmed in the same factory. I wonder if the people who worked there the next day knew the star of “Die Hard” was filming a movie there the night before.

There’s a decent fight scene in a men’s restroom but this is to “The Bourne Identity” what “Corky Romano” is to “Taken.”

DID YOU KNOW: ‘Extraction’ star Gina Carano’s father, Glenn Carano, served as a backup quarterback for the Dallas Cowboys and started for the USFL’s Pittsburgh Maulers.

Why is it that Willis, the same actor who once worked for Quentin Tarantino, Wes Anderson, Blake Edwards, Terry Gilliam, Norman Jewison, Brian De Palma, Robert Benton, M. Night Shyamalan, Alan Rudolph and Luc Besson, now willing to be in a movie from the director of the remake of “Silent Night, Deadly Night”?

It’s one thing for Willis to be kidding his action movie legacy, as he amusingly teased in the “Expendables,” “RED” and “G.I Joe” franchise installments. Having fun is one thing: Willis’ work in “Extraction” is roughly the performance you would get if you woke him up at 3 a.m. and begin filming before he gulped down his first cup of coffee.

Currently on the Broadway stage, Willis is reportedly electrifying audiences in “Misery.” In “Extraction,” he’s giving the sort of barely engaged, may-I-have-my-paycheck-please performance that made the latter part of Charles Bronson’s long career such a drag.