Is it the delicious way he wraps his tongue around his lines, making every syllable sound almost musical?

Is it the teeth-gnashing joy of acting that is visible in every performance, no matter how outlandish the character? How about the way he eloquently words evil as “ee-vil,” and poem as “poe-em”?

Perhaps it’s how he injected unexpected doses of pathos or humor into the most tortured of characters. 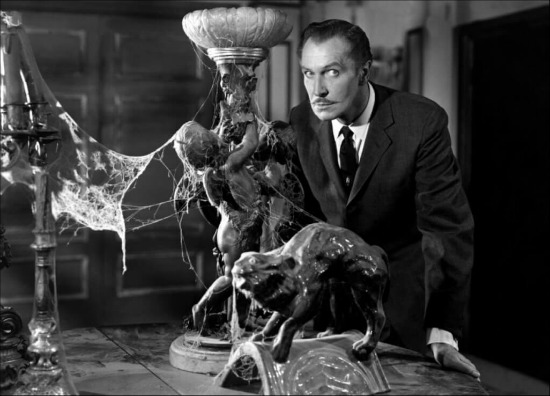 Price was, without question, one of the most prolific American actors who ever lived. A more arguable point was that he was among the finest 20th century film actors.

If one reasons that becoming a character is best exemplified by transformational performers like Marlon Brando and Daniel Day-Lewis, then Price’s approach may seem less impressive or old fashioned.

Yet, Price’s extensive theater training, radio and stage background and astonishing body of work recall another of our greatest actors: Michael Caine.

Price’s highly theatrical approach suited every role he played. If you only know Price as the cackling boogeyman (not an unfair first impression), it may surprise you to discover his versatility.

Price began as a classically trained stage actor. With William Shakespeare under his belt, he segued to film roles in costume dramas. Gradually, his appearances in horror films became so frequent and eagerly anticipated he joined genre superstars such as Bela Lugosi, Boris Karloff and Christopher Lee.

Indeed, Price is perfectly cast in films like “House of Wax,” “The Fly” and either of the superbly macabre “Doctor Phibes” vehicles.

He delivered self aware, deliciously campy turns as Egghead in the “Batman” TV series and in William Castle’s “House on Haunted Hill.”

Yet, in the 1987 character drama “The Whales of August,” in which he co-starred with the legendary Bette Davis and Lillian Gish, he is movingly tender.

From Classics to Clunkers

Price starred in scores of funny, tongue-in-cheek commercials. Even in duds like “The Monster Club,” he always performs with utter conviction and dignity. If there was ever a role that embarrassed him, you won’t see it in his acting.

He played a mob kingpin in Dennis Hopper’s offbeat “Backtrack” and the inventor in Tim Burton’s Edward Scissorhands.” In the former, he shares scenes with Joe Pesci, Dean Stockwell and John Turturro but always holds the focus.

In the latter, his moments with Johnny Depp, playing his father figure, are sweetly whimsical, until they conclude in a devastating fashion. Leave it to Price to conclude both Burton’s movie and his remarkable acting career with a killer exit.

Where does one even begin to lean in on specific Price performances? In my view, his essentials are “The Abominable Doctor Phibes,” “House of Wax,” “The Whales of August” and “Edward Scissorhands.”

Those four titles are still a small batch in a career that included hundreds of film roles, scores of plays and an ubiquitous presence every October. That’s when Michael Jackson’s “Thriller” takes over the airwaves, featuring his inimitable pipes.

In addition to Jackson, Price was also a favorite of Alice Cooper and appeared in Cooper’s “The American Nightmare.” One can become dizzy examining Price’s legacy.

A recent Blu-ray box set allows Price’s fans to relish his knack for giving spellbinding turns in any given movie.

” compiles five intriguing, lesser known turns to hone in on.

The first is a colorful Jules Verne fantasy, “Master of the World.” Think “20,000 Leagues Under the Sea” elevated out of the ocean and into the sky.

Price plays the captain of a vast airship, not unlike Christopher Plummer’s Charles Muntz character from “Up.” The movie, which oddly cast Charles Bronson as its leading man, is full of ambitious , adorably cheesy special effects.

The disc includes a commentary by actor David Frankham (who co-starred with Price in this and “The Return of the Fly”). The best featurette on this packed-to-the-gills disc (which includes the theatrical trailer and multiple photo galleries) is a candid, 72-minute interview with genre legend Richard Matheson. He discusses a large range of projects, including “Master of the World.”

The second disc features Price’s “Tower of London,” a Roger Corman production that combines the plot of “Richard III’ and “Hamlet” and was shot, against Corman’s wishes, in black and white.

Price sports a hairdo as similarly bad as Peter Sellers in “What’s New, Pussycat?” The star’s wannabe Shakespeare dialog isn’t worthy of the Bard. Yet, Price is wonderful as the murderous holder of the throne, even as Corman shamelessly cuts corners to keep the budget low.

Witness Price, on a balcony, addressing an adoring crowd we hear but never see!

The disc includes an engaging interview with the always verbose Corman, as well as an equally unguarded interview with Corman’s brother/producer, Gene. The best of the multitude of extras is the surprising inclusion of two episodes of “Science Fiction Theater,” both of which star Price in skillfully understated performances.

If the show title sounds familiar, then you’re clearly a “Back to the Future” fan. Yes, movie buffs, you can now see the TV series George McFly almost stayed home to watch over attending the Enchantment Under the Sea Dance.

Thank heavens Darth Vader changed his mind, but I digress.

The third disc in “The Vincent Price Collection III” is dedicated to “Diary of a Madman.” Like every title in this box set, the film has been cleaned up and presented in a new Hi-Def master, though this title is especially gorgeous.

“Diary of a Madman” involves Price being possessed and unable to control his most fiendish desires, which is visualized by a cool green light shined in his eyes.

It’s that kind of movie.

The film’s poster touted it as “The Most Terrifying Motion Picture Ever Created!” and, to say the least, the film fails to deliver on its promise. However, it’s a pleasure to see Price, an art connoisseur in real life, play a passionate sculptor and share solid romantic chemistry with Nancy Kovack.

Best of all, the film has a memorably creepy reveal involving a severed head. The disc includes a commentary by film historian Steve Haberman, whose info-packed discussion is worth a listen, and the film’s trailer and a photo gallery.

The third disc shares billing with “An Evening with Edgar Allan Poe,” a filmed theater piece in which Price performs four Poe tales. Each of the four vignettes (“The Tell-Tale Heart,” “The Sphinx,” “The Cask of Amontillado” and “The Pit and the Pendulum”) take place on a different set and showcase Price essaying four different characters as he performs Poe’s works.

The final piece, “The Pit and the Pendulum,” is essential viewing for Price fans: in addition to some impressively surreal imagery, Price’s intense performance is a true tour de force.

The inclusion of this film is a gift, an opportunity to see Price exuding both his ability to captivate both in film and on stage.

Haberman’s commentary for both films is a delight, as are the additional extras. It’s also noteworthy that the Poe feature comes in a new master from the original 2″ tape masters. It looks as stellar as the other cleaned-up prints.

The last, fourth disc in this collection is entirely dedicated to “Cry of the Banshee,” which is presented both in its theatrical and director’s cut.

While the extras are plentiful (Haberman’s commentary is just as interesting as the somewhat odd interview with the film’s director, Gordon Hessler), the film is a dud.

Sporting ample nudity and scenes of witchcraft but never cohering into anything worthwhile, Price is the best thing in the box set’s lone R-rated movie, which didn’t deserve him.

” is a typically authoritative work of love from The Scream Factory and provides definitive assemblage of a hard-to-find genre work and scores of great bonus materials.

For this Price fan, it left me exhausted and grateful to encounter even more opportunities to witness Price’s range and the visible joy in his work.

Price’s greatest gift was the all-in gusto he gave to every single performance he gave. Whether the film he appeared in was either golden or “Dr. Goldfoot and the Bikini Machine,” Price is always great fun to watch.

When the material wasn’t there, he never went down with the ship. In fact, he was often the best thing about every project he appeared in, crafting men who were either the embodiment of good…or perfectly eee-vil.