This critic caught rocker Chris Isaak at the Denver Botanic Gardens a few years ago. As summer concerts go, it was as close to perfection as the season permits.

A shimmery late summer sun. A gorgeous backdrop of Denver’s finest fauna. And a singer with a falsetto that does the late Roy Orbison proud. Add just the right amount of wine, and I couldn’t wait for a repeat performance.

Luckily, the 60-year-old crooner scheduled a return engagement this summer at the Denver Botanic Gardens.

How could I say no? 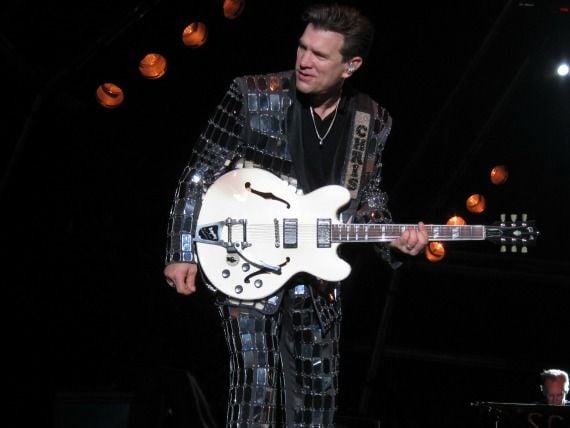 My wife and I packed our food, mini-chairs and picnic blanket. We synchronized our sitter’s schedule just right, managing to arrive at the venue two hours early. We wanted the very best seats to the general admission show.

Only the Gardens clerk look at us funny when we arrived. Wrong venue.

Huh? There are TWO Denver Botanic Gardens? Eight years in Denver and I didn’t know that basic fact?

And the “other” one was a good half hour away — without traffic.

Feeling supernaturally stupid, I walked back to our car and drove headfirst into rush hour traffic. An hour later we arrived at the other Denver Botanic Gardens. We trudged along to an empty spot on the grass. As expected, the headliner would be a tiny blip from our vantage point.

By now, a slow but steady drizzle began to fall as I unpacked my Trader Joe’s salad. 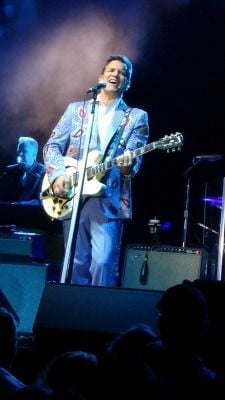 And then Isaak took the stage. Bedecked in sequins, his hair impossibly perfect, he launched into his song catalog with signature pep. Wonderful, except he looked so far away. Because he was.

And it was all my fault.

Then my bride insisted we leave our spot and wind our way to the front of the stage. Wouldn’t it be jammed there, I thought? I was too woozy to resist.

We ended up about 20 feet from the stage. It helped that Isaak’s fan base has matured along with him. We weren’t in danger of any moshing, to be blunt.

My spirits began to lift. I snapped about a 100 pictures while dancing away. Isaak was as good as I remembered. Is he ever anything less?

He’s still marquee handsome at 60, even if mid-set he did a few numbers while partially seated. His banter seems spontaneous even though you know it’s a grab-bag of impeccably rehearsed lines. He doesn’t get political, or personal or even remotely off message. 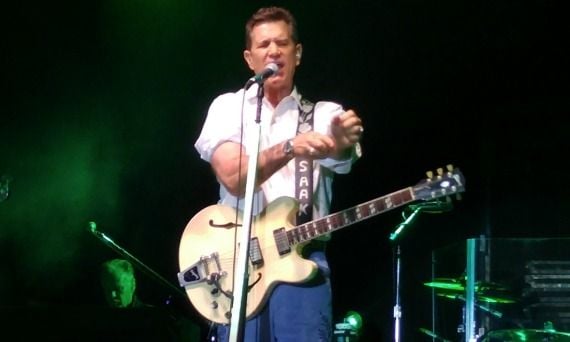 Isaak typically references musical giants like Orbison and Jerry Lee Lewis. The songs always sound precisely like the album versions, but somehow better. He talks up his band, and playfully mocks them in true rock god fashion.

He reminds the crowd he’s having a blast, as if that’s necessary.

Isaak became a superstar for one bright, impossible moment. His 1991 slow burn ballad “Wicked Game” caught fire on MTV. His face was ideal for music videos, complete with an imperfect nose from his days as a light heavyweight boxer. It didn’t hurt that he was frolicking on the beach with model Helena Christensen.

Fame naturally followed, but he never was the Flavor of the Month in quite the same way. He starred in his own Showtime series, collected a series of acting gigs and kept on touring.

He’s a poor fit for today’s music scene, at least from a shallow, bubble gum perspective. He’s too old to be a hipster. His songs are unabashedly old-school, sonic cousins to the likes of Johnny Cash, Elvis Presley and, of course, Mr. “Pretty Woman” Roy Orbison.

He’s more likely to wear his mirror jacket than a meat dress or any other buzz-worthy ensemble. You won’t read wacky tabloid headlines about him or see him spout off on the presidential race.

He’s endlessly self deprecating, both on stage in during press interviews.

Now, not everyone needed a night of beautiful music as much as I did. Others actually knew their destination before even getting in their car. Others had an otherwise uneventful day at work and were raring to relax.

Isaak was there for them, too.

The concert gave me everything I hoped for … despite my best efforts to sabotage it. But I couldn’t help thinking about Isaak’s old-school approach on the drive home.

In a way, he represents what’s too often missing from today’s entertainment scene. It’s always about the music, the experience and the entertainment value with Isaak. Nothing else matters.

We all paid good money to see him. And he never forgets that.

He didn’t stop the concert for a political rant. No one interrupted the show, and if he or she did you know Isaak would take it in stride.

Maybe he represents the end of an era. It’s an echo of Mickey Rooney belting out, “let’s put on a show…”

Here’s hoping Isaak has no intention of retiring any time soon. We still need Chris Isaak more than ever.