” fills in some of those maddening blanks.

The new film doesn’t dig deep enough into the cyclist’s life. But we do see how his elaborate doping regimen helped him win the Tour de France over and again.

It wasn’t pretty. And “The Program” shows just how far Armstrong would go to defend himself.

Ben Foster, who looks somewhat like the disgraced cyclist, captures Armstrong’s intensity in a way that moves beyond mimicry. He is Armstrong, a warrior on a bicycle who is even tougher on two feet.

We watch him at the start of his career, and how he quickly seeks out a chemist to enhance his cycling skills. Heck, he’s not the sport’s only doper. But no one will pedal harder to come in first, assuming he has the right chemicals coursing through his veins.

Director Stephen Frears (“Dangerous Liasions,” “The Queen”) tells his story through a journalist who suspected Armstrong’s rise was too good to be true. Chris O’Dowd, primarily a comic screen presence, is quietly persistent as someone fighting for the sports’s integrity.

Here’s why that seemed foolish at the time:

Armstrong was both a cancer survivor and an American sports hero. Calling him a cheat wasn’t good for business.

Of course, we all know the saga’s sad ending. Who can forget Armstrong’s chilling mea culpa on Oprah Winfrey’s couch? 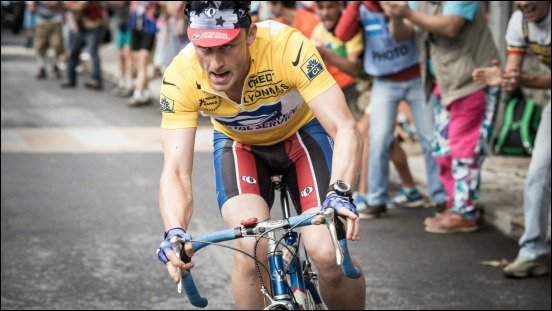 What’s missing in “The Program” is Armstrong’s private side, those unguarded moments when no one was around to nod along to his lies. We see him flirt with a beautiful woman in a hotel lobby. Seconds later, they’re getting married.

That’s as close as we get to the cyclist’s marriage. Still, what emerges is a chilling portrait with flashes of his inner turmoil.

The best scenes aren’t of Armstrong on the road, although Frears employs a “you-are-there” style that meshes perfectly with cycling.

No, It’s seeing Armstrong visiting cancer wards, talking to children in a way that’s nothing less than beautiful. At one point he greets a very sick child who can barely speak. Armstrong tells him they can just sit together, quietly, without either saying a word.

It’s heartbreaking, and it shows the decency lurking within Armstrong’s embattled soul.

So where did this drive to win at all costs come from? It’s left out of “The Program,” and that’s critical. We know he fought to maintain his “innocence,” bringing the same ferocity that he applied to the Tour de France.

“The Program” does few favors for cycling. It’s an insider’s club where fame, money and records matter more than integrity.

The film’s stealth sub plot involves fellow cyclist Floyd Landis, part of Armstrong’s cycling team who eventually got the spotlight all to himself. His tragic fall, captured by rising star Jesse Plemons of “Fargo” fame, is more illuminating than the main character.

Landis’ faith-based background is too thinly sketched out, but it lends context to his moral struggle.

A little more of that from the film’s main character, and “The Program

” would be a biopic worth revisiting come Oscar season.