The streaming platform dominated the digital landscape, making it a ubiquitous brand in the new content order. Besides, “Amazon Prime and chill” doesn’t have the same ring to it.

Culture moves fast, though, and the emerging digital landscapes looks far different than just two years ago. New players like Disney+ and HBO Max threaten to upend Netflix’s dominance in this space.

The numbers bear this out.

The margins between Disney+, Hulu, and HBO Max & Netflix and Prime Video continue to grow smaller. Netflix is the market leader by a 8% margin, and Prime Video now holds just 6% over Disney+. Apple TV+ didn’t find the key to growth while offering a free trial, and we will see how ending the trial affects its market shares in the Q3 analysis.

So says JustWatch, a web site and app that helps consumers pick the best streaming content available. The company’s study covers U.S. market shares of streaming services for Q2 of 2021, a time when lockdown measures were either fading or finally rescinded in most parts of the country. 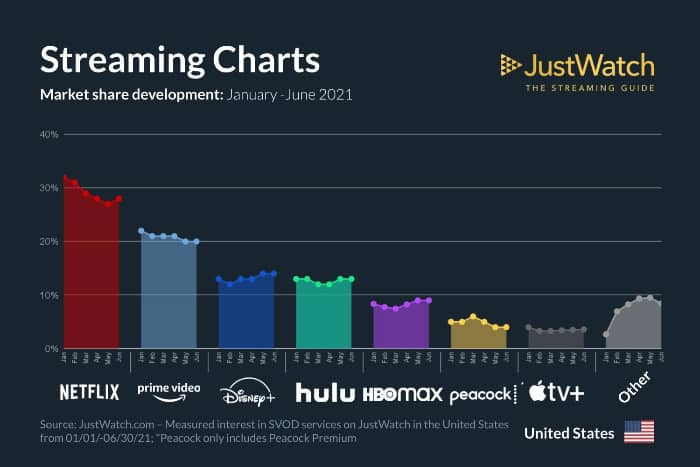 It’s obvious Apple TV will continue to struggle in the marketplace. Newer platforms like Paramount Plus have gobs of existing content in their library to offer, something Apple TV sorely lacks.

Nor did Apple TV film originals like “Greyhound” with Tom Hanks or “On the Rocks” with Bill Murray and Rashida Jones.

The Disney+ emergence isn’t shocking, but it’s still noteworthy that a new service could climb the streaming ranks so quickly. It helps that the Mouse House keeps delivering originals that people care about, from “Cruella” and “Black Widow” to original Pixar fare.

We’ll have to see what Warner Bros. decides about its 2022 film release schedule when it comes to HBO Max. This year, the mega studio released its biggest titles in both theaters and at home simultaneously, a true coup for the new platform.

Will that continue next year, and will subscribers flee if the policy ends?

Netflix remains the industry leader, though, and that should continue given the crush of glossy originals its bringing to the marketplace this year and beyond.

That means Netflix can chill in the number one streaming slot … at least for now.