Comedian Steve McGrew is no stranger to leaping career hurdles.

In the 1990s HBO passed on a possible McGrew special, he says, after the comedian torched then-President Bill Clinton.

Undaunted, McGrew brings his act to stages, podcast apps and now digital music platforms. His new album, “Toxic Masculinity,” captures the Colorado comic at his best. HiT reached out to McGrew to learn more about the project and how he’s keeping busy in our quarantine times.

HiT: What’s the best way to describe “Toxic Masculinity,” and how does it capture where you are as a stand-up comic in 2020?

McGrew: “Toxic Masculinity” was a two-years-in-the-making project. It’s several shows recorded over the past couple of years, The bits kept growing and getting better. I couldn’t just turn in a project I knew was taking on a life of its own.

There’s a couple of older bits that I included, too, because they had gotten better and one older bit about kids that needed to be heard again. And I knew with this larger record company “Toxic Masculinity” was going to reach more people that had missed [the material] before.

HiT: Comedy records go back decades, and on the surface they seem like a product of the past. But that’s clearly not the case, and many comedians rely on them. Can you share what a record means for you and your career?

McGrew: I loved comedy records as a kid. I would sneak and listen to my parents’ old Redd Foxx and Rusty Warren albums. I had several Smothers Brothers albums. and one or two [George] Carlin records. So it means you’ve reached that status, well, in my head it does! 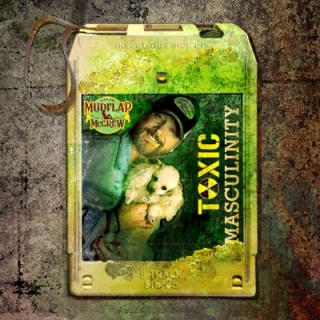 It also means a record company thinks your comedy is so good enough it needs to be heard by the masses. It’s a compliment to be asked! I hope this album helps spread the word about Mudflap McGrew!

HiT: The record’s very title is … problematic! Talk about addressing the real differences between men and women today in a culture increasingly uneasy with the topic

McGrew: Yes, I chose the title because it’s clickbait, it’s a trigger word and the fact it’s total B.S. There’s no such thing as “toxic masculinity.” Hence the cover art. A dirty looking man holding a tea cup poodle….

The left has tried to feminize boys and mentally castrate men. They want all men to be wussies and not question, not have a backbone, not be a leader, basically, not be what nature and God intended men to be. Men and women are different… ( sorry, SJWs it’s the truth).

HiT: How have you channeled your creativity during the current quarantine?

McGrew: I have been doing a lot more writing and producing videos. I do a lot of characters on my Youtube channel. I’m basically a one man SNL, only funny. Ha! I’m working on a couple of projects, too.

Larry: Joe Biden under ATTACK by the mainstream media! And stop saying WOMAN! It hurts our agenda

HiT: What can you share about your upcoming online comedy special with Terrence Williams? What recording challenges must you stare down to make it happen?

McGrew: Terrence and I have been friends for years, After his first viral video I reached out to him and told him how awesome it was and to keep up the good work! He did and now he’s much more famous than me!

We toured last year as The Deplorables. Well, this will be a Deplorables, “SNL” kinda thing. We will have skits, characters, and special guests, big guests. I can’t say too much about it right now, but it’ll be ready to air soon.

HiT: Being “offended” by jokes feels even more minor than usual given the tenor of the times. Could Cancel Culture fade as a result of CO-VID19, or will it rise up anew once normalcy returns?

McGrew: I hope it fades. It’s killed real comedy. All good comedy has a punchline, someone or something IS the butt of the joke. I get so tired of hearing “don’t punch down… ” this coming from the lib comics that think rape jokes are a must for every new comic.

Look, I do think some topics shouldn’t be used but for the most part, Comedy is everywhere! You can find humor in almost any situation. There’s very few [topics] I will avoid. I am a fan of jokes that many would say, “Too soon!”

McGrew’s “Toxic Masculinity” is available now on iTunes and Pandora.