Those who say movies don’t do the latter weren’t around in the 1970s to witness the aftermath of “Rocky.” How many kids started drinking raw eggs after watching Sylvester Stallone?

How many couples tried spanking after renting 2002’s “Secretary?” God knows what people will try after “50 Shades of Grey” is released next year, and yet, paradoxically, we’re not that impressionable.

Some movies touch us and others don’t. Human sexuality is as unique as the human finger print, and nowhere is this more demonstrated than in what we find sexy at the movies.

Here are the films that walked that fine line between being both sexy and scary.

“Angel Heart” (1987) — Private investigator Harry Angel (Mickey Rourke) is down on his luck and catches a unique missing persons case from an equally unique client named Louis Cyphre (Robert De Niro). Set in 1955, the movie opens in New York City and then shifts to New Orleans as Harry begins to track down his prey. “Angel Heart” is chock full of horror archetypes from gypsies to mediums and even voodoo priestesses, and there’s a ton of symbolism in every shot. Somehow it all comes together. This is some of Rourke’s best work as an actor; he does a brilliant job of showing the depth of his character’s unraveling.

What Makes It Scary? It explores the deep-seated fears we all share around losing our identity and of discovering our darker natures.

What Makes It Sexy? Lisa Bonet plays Epiphany Proudfoot and when we first meet her character she’s washing her hair outside in the heat of a New Orleans’ summer day. The scene is basically the equivalent of a wet T-shirt contest. That’s a fair knock at it, but the entire scene shimmers with sexual tension. We had grown up watching Bonet on “The Cosby Show” and now suddenly here she is all grown up. This is my equivalent of the “gold bikini” Princess Leia meme.

“Brotherhood of the Wolf” (2001) — This film remains hard to categorize. Some consider it a gothic period piece or a “French Historical-Action” film, while others put it squarely in the horror genre. It was ahead of its time in terms of mixing genes; think “Sucker Punch” but with more discipline. It also marks the official crossover for Monica Bellucci, going from being primarily a French actress to a Hollywood beauty. She moves on from this to star in the “Matrix” trilogy as Persephone.

What Makes It Scary? There’s a genuine eeriness in the first hour as the monster(s) are slowly revealed. 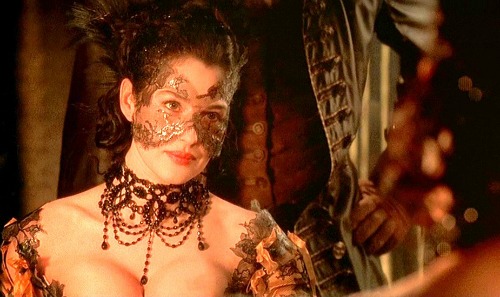 “The Devil’s Advocate” (1997)— Like Mickey Rourke in “Angel Heart,” Charlize Theron deserves more recognition for her role as the wife of Kevin Lomax (Keanu Reeves) who slowly deteriorates after they move from Gainesville, Fla to NYC. I can’t help but think this part helped her prepare for her Oscar-winning role in “Monster.” Al Pacino delivers a demented and joyful performance as John Milton.

What Makes It Scary? Pacino does “menacing” better than most, and the story and writing don’t let him, or the rest of the cast, down.

What Makes It Sexy? Connie Nielsen manages to out sexy Theron and that’s saying something.

“Cat People” (1982) — First, this remake of the acclaimed 1942 original gave us David Bowie’s classic song: “Cat People (Putting Out Fire)” which Quentin Tarantino used to perfection in “Inglourious Basterds.” Second, the film introduced us to Nastassja Kinski. I think to fully understand the impact that Kinski had back then you have to realize that in 1982, Farrah Fawcett owned the culture. If not her, then Cheryl Tiegs or Heather Thomas. Women with short, dark hair who hailed from someplace “foreign” wasn’t a thing back then. It’s like that line from “Out of Africa,” “Think of it, never a man-made sound… and then Mozart.” I’d only change it to, “Think of it, only blonde bombshells and then Nastassja.” 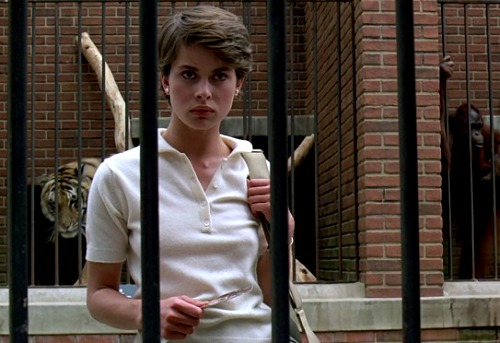 What Makes It Scary? The movie explores, as best it can given the censorship of the times, the animal nature of human sexuality.

What Makes It Sexy? At one point Kinski is tied to a bed, which was pretty daring for the times when you think about it.

“From Dusk ’til Dawn” (1996) — This movie arguably launched both George Clooney and Salma Hayek into Hollywood stardom. It also gave us the first paring of Robert Rodriguez (directing) and Quentin Tarantino (screenplay) in a passable vampire shoot em’ up. What makes this film memorable is Hayek and her almost five minutes of screen time on a stage as the stripper Santanico Pandemonium.

What Makes It Scary? It’s not really scary, but it does have some intentionally funny moments.

What Makes It Freaky? Clearly Tarantino has a foot fetish. 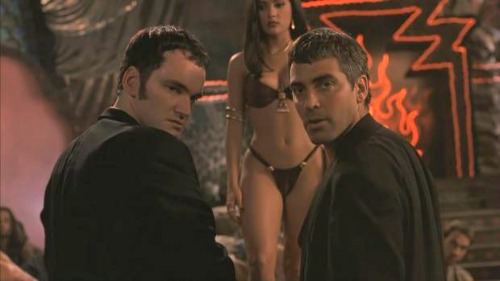 Please check out the female perspective on sexy horror movies as well.